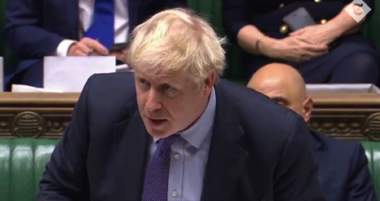 During a special parliamentary assembly on Saturday, October 19, British Prime Minister Boris Johnson faced a humiliating defeat of his Brexit deal (a U.K. withdrawal arrangement), which Brexit Party leader Nigel Farage had blasted in multiple television interviews as nothing less than a “new EU treaty.”

For the first time in 37 years, the House of Commons met on a Saturday, in order to vote on British Prime Minister Boris Johnson’s renegotiated “Brexit” deal — however the measure ultimately failed. Johnson’s Brexit deal was effectively blocked by an amendment presented by Sir Oliver Letwin, a former Conservative Party MP (Member of Parliament) turned independent. Letwin’s amendment withheld parliamentary approval of Johnson’s Brexit deal until after all the necessary implementation legislation for the agreement has been passed. After three hours on debate on Saturday, MPs voted 322 to 306 in favor of the amendment.

On Monday, Johnson hoped to try again to secure a “meaningful vote” to proceed with his proposal, but that failed to move forward. U.K. House of Commons Speaker John Bercow said in denying Monday’s effort: “In summary, today’s motion is in substance the same as Saturday’s motion and the House has decided the matter. Today’s circumstances are in substance the same as Saturday’s circumstances. My ruling is therefore that the motion will not be debated today as it would be repetitive and disorderly to do so.”

After rejecting a motion from the Johnson government for a second vote on the Brexit deal with the EU on Monday, Speaker Bercow reminded the prime minister that he could introduce the separate and necessary EU withdrawal and implementation legislation, which would make the necessary changes to British law and statutes covering how the Brexit deal would affect the country’s laws.

At 8 p.m. (local British time), 10 Downing Street released its European Union (Withdrawal Agreement) Bill. The bill is 115 pages, including 64 pages of amendments. The amendments alone are as long as Johnson’s proposed Brexit deal with the EU, which is also 64-pages. Several MPs have expressed frustration with the prime minister for releasing the text of the bill on the night before they are expected to vote on it.

Key Brexiteer Nigel Farage, member of the European Parliament (MEP) and leader of the Brexit Party, has already called foul on Johnson’s 64-page Brexit deal and is urging its rejection in Parliament.

On October 17, 2019, during a brief live telephone interview on Fox Business’s Varney & Co., Farage told host Stuart Varney, “Mrs. [former Prime Minister Theresa] May brought this new EU treaty — it’s not a deal but a treaty — back to us a year ago. Our Parliament quite rightly rejected it three times. What Boris has now done is to amend it (get some changes) to put lipstick on the pig. There are somethings that are better about it; somethings that are worse about it.” 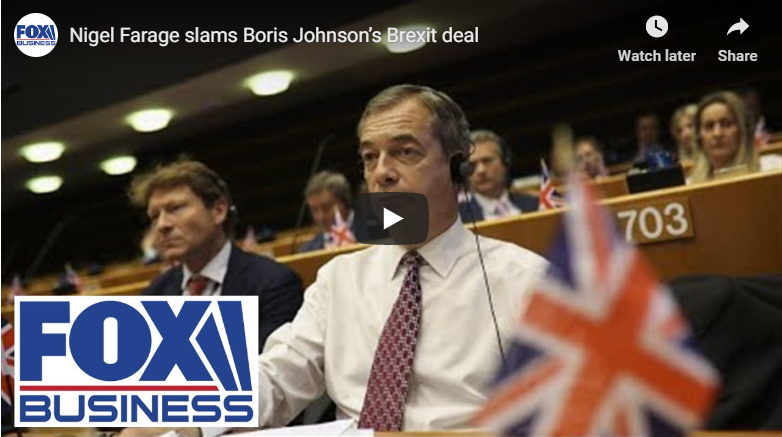 Addressing major problems with Johnson’s proposed Brexit deal, Farage elaborated on how it would keep the U.K. entangled in the EU. “If what Boris is negotiating goes through, it will be at least 2022 or 2023 before there is any trade deal with the USA,” Farage said.

As an EU member, the U.K. is not allowed to negotiate its own bilateral trade deals with other countries that it wishes to pursue. When a nation joins the EU, or any other customs union, it forfeits its national right to conduct trade relations with foreign countries outside of the customs union. Instead, all external trade policy is negotiated and carried out by the union’s governing executive body, such as the European Commission in the case of the EU.

“We will be trapped forever under this agreement,” Farage warned, “with environmental laws, with employment laws, even taxation is mentioned here. It’s Brexit in name only.”

Farage’s succinct yet grim overview of Johnson’s Brexit bears much resemblance to President Donald Trump’s recently negotiated United States-Mexico-Canada Agreement (USMCA), which is slated to replace NAFTA. During the 2016 election, Trump repeatedly described NAFTA as “the worst trade deal” ever signed by the United States. Yet despite Trump’s rhetoric claiming he was negotiating a “better deal” for America, the USMCA would also entrap the United States, heaping on all of North America onerous regional environmental and labor policies.

For example, as The New American has previously reported, the USMCA includes an environment chapter that advances the United Nations’ concept of “sustainable development,” which is the cornerstone of the UN’s Agenda 21 and Agenda 2030 environmental schemes for wealth redistribution and building world a UN-centered government. The environmental chapter also subordinates the United States to the Law of the Sea Treaty, which the U.S. Senate has never ratified because of the dramatic losses U.S. freedoms would face in using the oceans or the skies above them or the sea floors below them.

The USMCA would also demand the United States recognize the “right to collective bargaining” and impose legal protections for “migrant workers,” “gender identity,” and other LGBTQ “gender-related issues” in the workplace.

Worst of all, Chapter 30 of the USMCA establishes the creation of a “Free Trade Commission” that would act as the executive body for the agreement, much like the EU’s ruling European Commission. Likewise comprised of unelected government bureaucrats, the USMCA Free Trade Commission would oversee the implementation of the agreement and govern a vast regional bureaucracy of about 19 committees, each covering different subjects or sectors, such as labor and the environment. This committee could essentially mandate changes to U.S. laws in many areas, without the say-so of U.S. voters.

All of these provisions in the USMCA amount to stripping away American sovereignty in subordinating the United States in a new regional supranational union, or North American Union.

Considering the sheer difficultly that the U.K. is having in leaving the EU, despite the results of the 2016 referendum to exit the EU, this should serve as warning to all Americans, especially Congress, as it considers implementation legislation for the USMCA.

During the signing ceremony for the USMCA in Buenos Aires, Argentina, then-President of Mexico Enrique Peña Nieto boasted in his remarks, delivered in Spanish, “The renegotiation of the new trade agreement sought to safeguard the vision of an integrated North America, the conviction that together we are stronger and more competitive.” Further adding, “The Mexico-United States-and-Canada Treaty gives a renewed face toward our integration.” Shortly after signing the agreement, Peña Nieto tweeted the following on Twitter:

On my last day as President, I am very honored to have participated in the signing of the new Trade Treaty between Mexico, the United States and Canada. This day concludes a long process of dialogue and negotiation that will consolidate the economic integration of North America.

The USMCA is designed to form a trade bloc similar to other regional trade blocs and integration schemes around the world, such as the EU. Johnson’s so-called Brexit agreement is just as bad for U.K. sovereignty as the USMCA is to U.S. sovereignty. And while many in the U.K., such as Farage, are eager for a U.S.-U.K. free trade agreement, U.S. globalists have long sought the creation of a Transatlantic Union, binding the United States to Europe in much the same way that the U.K. is bound to the EU and America is being bound to Canada and Mexico, which would be terrible not only for U.S. sovereignty, but also for the U.K.’s prospects of leaving the EU.

Image of Boris Johnson: Screenshot of debate over Brexit by the Telegraph