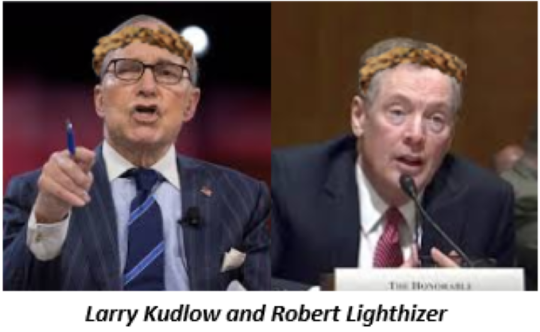 Being a huge Trump fan and wishing him the best in all that he does, I am sickened to report that he is blind as a bat on this USMCA (United States, Mexico, Canada) trade agreement he is heralding as the answer to replacing NAFTA (North America Free Trade Agreement).

Unfortunately, due to all the issues he has to juggle constantly, my opinion is that he is left to trusting those he shouldn’t be trusting.  President Trump can’t possibly know what is in it or he wouldn’t be promoting it.

Larry Kudlow as Trump’s Director of the Economic Council is someone he should have full trust in.  And apparently he does.  I have heard Kudlow repeatedly make supporting statements that Robert E. Lighthizer is the best trade negotiator we have and the man responsible for the creation of the new proposed trade agreement known as the USMCA.  Really.

There are a lot of problems with that though.  Firstly, is Kudlow unaware of what is in the USMCA, which would be quite incompetent of him in his position or is he a party with Lighthizer to the utter treachery contained within this bogus agreement?  I say bogus because the lead negotiator on the USMCA, Robert Lighthizer, was also the lead man on both NAFTA and TPP (Trans Pacific Partnership) agreement which Trump killed only days after his presidency began.  However, the USMCA looks to be the same as NAFTA plus 10-20%.

Caesar had friends like this named Marcus Junius Brutus  and Gaius Cassius Longinus.  I’m sure Kudlow and Lighthizer have no intent to assassinate Trump, but I can see if the USMCA becomes reality that when President Trump finds out the truth about what’s in it, him shouting words to Kudlow similar to that of Caesar’s ‘et tu, Brute?’

President Trump obviously doesn’t truly know what is in the USMCA.  Here’s why.

President Trump is on record acknowledging all that is wrong with NAFTA and TPP for the same reasons.  They are both bad for our interests, NAFTA with a blatant track record of injuries to our economy and our labor market and TPP taking those same designs even further with many more countries that likewise benefit from our handicaps purposefully structured into the huge Trojan Horse agreement.