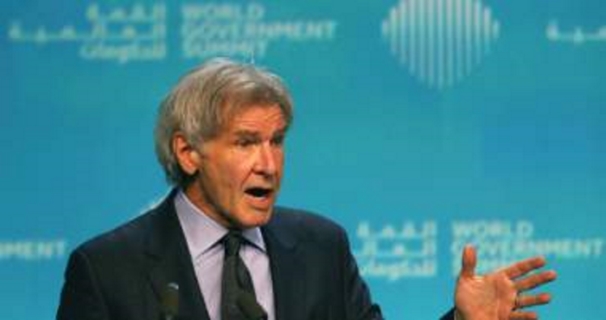 Top globalists are coming out of the closet. Thousands of leading globalists, communists, Islamists and others from around the world converged on the Arabian Peninsula this month for the World Government Summit. Their goal: promote technocratic globalism and plot the future of what they often call their “New World Order.” Senior officials from the United Nations, the World Bank, the International Monetary Fund, the European Union, Communist China, central banks, and even the Trump administration showed up to mingle with heads of state and advocates of Islamic Sharia law from across the region. Even Pope Francis delivered a message. As usual, despite top U.S. media outlets partnering with the summit, the establishment press in the United States largely failed to inform Americans about it.

News releases promoting the World Government Summit — yes, it is really called the World Government Summit — boasted that the event “is setting the agenda for the next generation of governments.” And one of the key goals of the summit was advancing the implementation of the UN Sustainable Development Goals (SDGs), often referred to as UN Agenda 2030. UN Deputy-Secretary General Amina Mohammed opened the summit by demanding that the radical UN scheme be implemented to avoid “life-threatening consequences for billions of people.” UN “High Commissioner for the 2030 Agenda” Cristina Gallach echoed the hysteria. And throughout the summit, more than a few speakers touted the controversial UN agenda as if it were the key to saving humanity from every problem under the sun.

The UN goals, as this magazine has documented, include national and global wealth redistribution, government control over the economy, globalist indoctrination of all children, surrendering more sovereignty to global institutions, and much more. They are essentially a “master plan for humanity,” as UN bosses put it, to build a global technocratic government that would dominate every facet of human existence. Unsurprisingly, the mass-murdering Communist dictatorship enslaving China boasted that it played a “crucial role” in developing the UN agenda. And dictators from around the world celebrated the plan as well. The World Government Summit formally launched its SDG’s in Action @ WGS platform in 2016 in partnership with the UN, the World Bank, and other outfits.

And the line-up of speakers was universally supportive of the agenda. In an address delivered to the World Government Summit after signing a controversial agreement with a top Sunni Muslim imam, Pope Francis, a fervent advocate of UN Agenda 2030, offered his “best wishes” for the work of summit attendees. Urging cooperation to address the “problems of each person in the global village,” the pope called for more environmentalism while using leftist rhetoric to drive a wedge between “people” and “capital and economic interests.”

Pope Francis also specifically promoted sustainable development, which is the ideology underpinning the UN Agenda 2030 Sustainable Development Goals that seeks to limit the human population and fundamentally transform civilization under the guise of saving the planet. “We cannot really speak of sustainable development without solidarity,” he said, using a buzzword that, along with “fraternity,” has become a staple for the pope and has raised alarm even among Catholic scholars. “We could even say that the good, if it is not the common good, is not actually good….I hope that your efforts at the service of the common good may bear fruit.”

The pope’s blessing of the World Government Summit was especially bizarre considering that in 2017, the event took place under the shadow of a replica of the Roman arch in front of the pagan Temple of Ba’al. The monument to the demonic idol, who is frequently referenced in the Bible, originally stood in Palmyra, Syria, a city known in the Bible as Tadmore. Among other concerns, this false pagan god demanded child sacrifices and other horrors that outraged the God of the Bible. While a number of replicas were planned, the very first was prominently displayed at the 2017 World Government Summit, attracting fierce criticism and deep concern among religious scholars — especially in light of the “World Government” motif.

As in previous years, some celebrities showed up to lecture humanity about the alleged need to submit to global governance and sustainable development to supposedly save the planet from humanity. Actor Harrison Ford (shown), for instance, went on a tirade against “nationalism” and “isolationism” after a bizarre segment in which he pretended to speak for “nature.” “I could give a damn with or without humans, I’m the ocean,” Ford said, pretending to be “nature” while speaking in a strange voice. “I covered this entire planet once, and I can always cover it again.” It was not clear whether he intended to refer to the biblical flood of Noah’s time or some other period during which he believes the oceans may have covered the entire planet.

Ford, a lifelong Democrat, also slammed President Donald Trump for allegedly denying “science” on climate change. “Around the world, elements of leadership including in my own country to preserve their state and the status quo, deny or denigrate science,” Ford said as whistleblowers and scientists from the UN continued to expose the UN’s lies and pseudo-science. “They are on the wrong side of history.” According to UN Intergovernmental Panel on Climate Change sea-level reviewer Dr. Nils-Axel Morner, however, who resigned in disgust when the UN IPCC refused to correct its false information, the lies underpinning the man-made global-warming hypothesis will inevitably be exposed.

Among the prominent “media partners” of the World Government Summit listed on the website were The New York Times, the Financial Times, Bloomberg, CNBC, the “fake news” kingpins at CNN, Sky News (owned by the owner of Fox News), and many others. It was not clear how they were expected to maintain impartiality about the agenda while also sponsoring the summit. Arianna Huffington of the fringe left-wing website Huffington Post and CNN International anchor Becky Anderson even spoke there, along with other media personalities. But as usual, there was very little coverage of the event in American media, perhaps because top globalists tend to openly promote globalism in a way that would alarm the U.S. public and jeopardize the agenda.

Consider, for instance, the speech delivered by Rwandan President Paul Kagame, who spent much of his time promoting the subversion of sovereignty via “regional and continental integration,” as he put it, to create a united African continent. “We will only realize our full promise, by joining together our historically fragmented markets, and making it easier for people, goods, and services to move across our continent,” he said, boasting of efforts by the globalist African Union (AU) to smash nation-states. “That is why the African Union adopted the African Continental Free Trade Area, which is due to enter into force later this year. We have also adopted a Protocol on the Free Movement of People.”

Of course, as leading globalist luminaries such as former U.S. Secretary of State Henry Kissinger have explained, regional governments such as the EU, the AU, and more are a critical component of the globalist vision for the “New World Order.” That is why the EU, the U.S. government, and the Communist Chinese government have been pouring money into the AU and other emerging regional governments. Even Russian strongman Vladimir Putin is in the process of building a “Eurasian Union,” as globalists in the United States pursue deeper integration of “North America” via NAFTA and the USMCA.

Also attending the World Government Summit was Pakistani Prime Minister Imran Khan, who urged investors to invest in Pakistan even while boasting about the glories of a welfare state. “I am really against this neo-liberal economics where you have 62 people owning as much wealth as 3 billion people on this Earth,” he told the audience, arguing that governments must take responsibility for taking care of poor people. Former Colombian President Juan Santos, who tried to hand his country over the Marxist terrorists with help from key globalists, spoke as well.

Among the more than 4,000 participants from 140 countries were a number of high-profile Americans. Among those who spoke on stage was U.S. Energy Secretary Rick Perry, a Bilderberg attendee, who announced a robotics competition from the stage. Daniel Kaniewski, the deputy administrator of the Federal Emergency Management Agency (FEMA), was also there. Disgraced EPA boss Lisa Jackson from the Obama administration, who still serves on the disgraced Clinton Foundation board, was at the globalist summit as well. And former Trump Secretary of State Rex Tillerson’s chief of staff Margaret Peterlin spoke, too.

While the establishment media keep Americans divided and distracted with deception and frivolity, ignoring real news such as the “World Government Summit,” globalists are dropping the mask and coming out of the closet for all to see. It seems everyone is welcome in the emerging New World Order — globalists, communists, Islamists, technocrats, Big Business, and more — except patriotic Americans and Christian conservatives. Liberty-loving Americans must expose the subversive globalist agenda before it snuffs out liberty, prosperity, and Western Christian civilization worldwide.

Alex Newman, a foreign correspondent for The New American, is normally based in Europe. He can be reached at anewman@thenewamerican.com. Follow him on Twitter @ALEXNEWMAN_JOU or on Facebook.

Creating a New World Order Out of Regional Orders

UN Goals for Humanity Target Children as “Agents of Change”