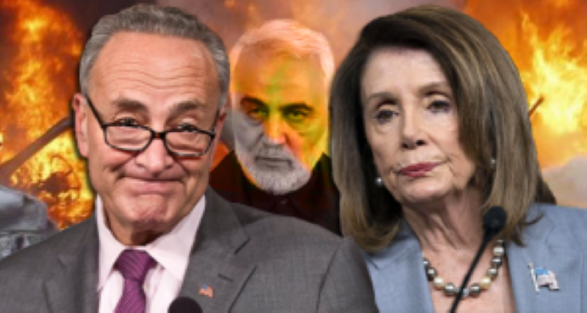 Once again, and purely for political purposes, Nancy Pelosi and the “America bad” Progressives in the Democrat Party are moving the goalposts to fit their agenda. This time it is the crafting of resolution language that would – once again – politicize military operations and hobble the President’s ability to defend our military personnel on the ground.

In the aftermath of the Soleimani get, Pelosi and her gaggle of self-important, power-hungry over-steppers have indicated they are introducing and voting on a War Powers Resolution that would limit the President’s use of force against Iran. This grandiose action is, in reality, a reiteration of the War Powers Resolution of 1973 and brings nothing new to the table. It is an attention-grabbing action to insert Pelosi and her ilk into relevancy on the issue of Iran.

The War Powers Resolution of 1973 requires the President (the constitutionally mandated Commander in Chief of the Armed Forces) to notify Congress within 48 hours of inserting US forces into a military theater without limitation and, limits the President’s authority to maintain a US military presence in any situation to 60 days without congressional approval. For the record, President Trump satisfied this requirement by delivering a classified communique to congressional leaders within the required 48 hour time period.

So, what is the genesis of the War Powers Resolution? It is the byproduct of President Truman’s and then Presidents Kennedy and Johnson’s constitutionally questionable “police actions” in the Korean and Vietnam Wars. It was in Korea and then in Vietnam that the politicians in the United States moved away from “declaring war” and toward engaging US military forces conditionally and without a clear mandate. This has facilitated the very “never-ending wars” that the Left insists they abhor.

Ironically (or not), the three Presidents who created this unconstitutional situation were all Democrats: Truman, Kennedy, and Johnson. And in both instances – both in Korea and Vietnam – it took an electoral change of leadership to a Republican president to disengage our soldiers from conflict.

It was during President Nixon’s maneuvering to position the United States for a “position of strength” withdrawal of US troops from Vietnam that the Democrats came up with the War Powers Resolution of 1973; an effort to maintain control of the military after an electoral defeat. The move was wholly unconstitutional.

“The President shall be Commander in Chief of the Army and Navy of the United States, and of the Militia of the several States…”

It has no limitations placed on that status. While Article I, Section 8 states that Congress has the authority to “declare war” and “make Rules for the Government and Regulation of the land and naval Forces”, it gives Congress no authority to interfere in battle operations or the strategic defense of the country or her military apparatus in theater.

All of this understood and proven factual by history, Pelosi and the Democrat’s move to “reiterate” the War Powers Resolution of 1973 in the context of President Trump’s actions regarding Iran can only be viewed as a desperate cry for relevance on the issue, and a cry that reeks of election-year politics. The exclamation point on this analysis comes in Chuck Schumer acknowledging that President Trump satisfied the War Powers Resolution in his whining that the communique should be “declassified”.

An aside, the communique, because it involves military operations should not be declassified. The United States should never telegraph its military intentions to the enemy, just as we did consistently during the Obama Administration. Doing so puts our military personnel in theater in harm’s way.

In the end, the pushing of this irrelevant resolution by Pelosi, Schumer, and the Democrats is both whorish for their need to be included in an issue that doesn’t involve them and serving to maintain an unconstitutional power grab that sees the Legislative Branch encroach on the Executive Branch; a continuation of the clear violation of Separation of Powers brought into being by the codifying of the War Powers Resolution.

That said, pay no attention to that little man – or in this case, woman – behind the curtain, she is definitely not the great and powerful Oz…