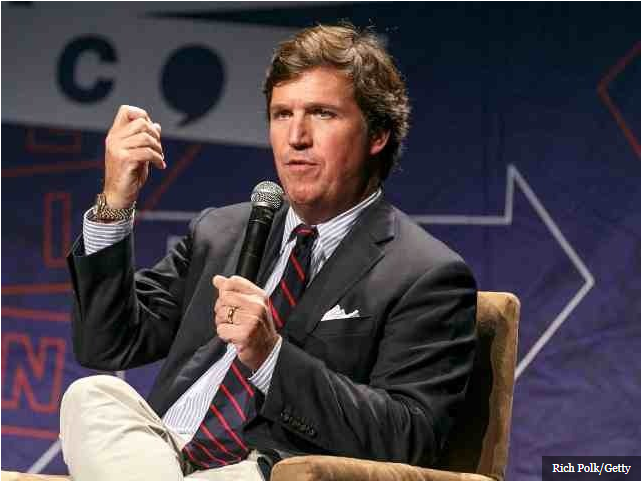 Tucker revealed that Americans for Prosperity, a “purportedly conservative group” controlled by the Kochs, launched an ad campaign trying to stave off the closing net of antitrust enforcement against Google and Facebook. The ads targeted Republican and Democrat state attorneys general that were investigating alleged antitrust violations by big tech companies.

The Koch-funded group also targeted members of the Senate Judiciary Committee with digital ads urging them to “oppose any effort to use antitrust laws to break up America’s innovative tech companies,” reported Carlson.

The Fox host ran through a laundry list of allegedly “conservative” D.C. think tanks that take money from big tech, and often advocate against regulating them over political bias or any other matter.

“In all, the Koch network quietly spent at least $10 million defending Silicon Valley companies that work to silence conservatives.” 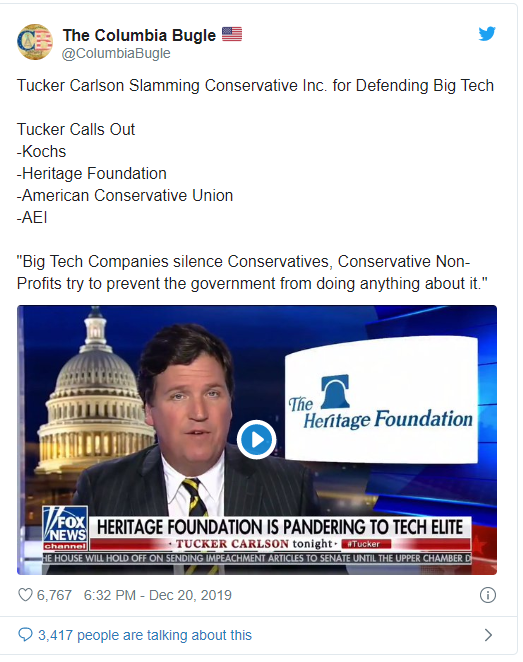 “Google has given money to at least 22 right-leaning institutions that are also funded by the Koch network,” reported Carlson.

Carlson explained that this spending gets results.

“In September of 2018, the Competitive Enterprise Institute and three other groups funded by Google and the Kochs sent a joint letter to the Attorney General at the time, Jeff Sessions, expressing grave concerns over the DoJ’s plans to look into whether search engines and social media were hurting competition and stifling speech.”

Carlson also called out The Heritage Foundation, arguing that its shilling for big tech meant that it “no longer represents the interest of conservatives, at least on the question of tech.”

“A recent paper by Heritage, entitled ‘Free Enterprise Is the Best Remedy For Online Bias Concerns,’ defends the special privileges that Congress has given to left-wing Silicon Valley monopolies. And if conservatives don’t like it, Heritage says, well they can just start their own Google!”

Evidence of big tech’s efforts to co-opt establishment conservatives has been accumulating for some time. In March, Breitbart News published leaked audio from a senior director of public policy at Google, talking about using funding of conservative institutions to “steer” the movement. Another part of the leaked audio transcript was also revealed on Tucker Carlson’s show at the same time.

The Heritage Foundation has continued to defend big tech against efforts to strip them of their special legal privileges, which were given to them by Congress in the 1990s and are enjoyed by no other type of company.

This is despite the fact that Google publicly snubbed the foundation last year, canceling the formation of a planned “A.I ethics” council after far-left employees of the tech company threw a hissy fit over the fact that Heritage president Kay Coles James was set to be one of its members.

Are you an insider at Google, Facebook, Twitter or any other tech company who wants to confidentially reveal wrongdoing or political bias at your company? Reach out to Allum Bokhari at his secure email address allumbokhari@protonmail.com.

Allum Bokhari is the senior technology correspondent at Breitbart News.