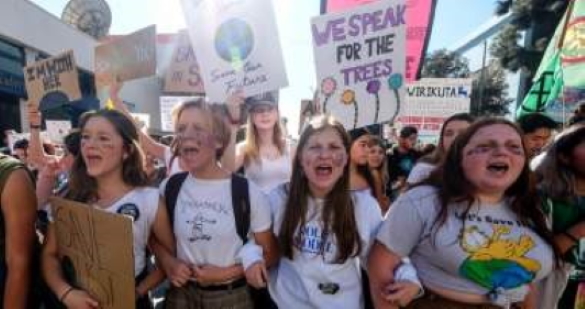 “Mommy, they said that we’re going to die in eight years.” That’s what Joylaea Blazevik, a distraught eight-year old, told her mother, Lejla Blazevik, following a presentation on global warming at her school, in Toronto, Canada. “They were terrified with the information,” Mrs. Blazevik told the National Post, a major Canadian newspaper.

Along with other seven- and eight-year-olds from second and third grade classes at her school, Joylaea had watched a video of Greta Thunberg, the Swedish teen climate crusader, delivering her now-famous “How dare you!” tirade at the United Nations. “People are suffering. People are dying. Entire ecosystems are collapsing,” the pigtailed girl ranted. “We are in the beginning of a mass extinction and all you can talk about is money and fairytales of eternal economic growth. How dare you!”

“You have stolen my dreams and my childhood with your empty words,” she charged, adding “We will never forgive you.”

Following Thunberg’s blistering diatribe, a large “carbon clock” appeared on the screen, counting down from eight years, the amount of time the global warming alarmists say we have until carbon-dioxide levels cause the earth’s atmosphere to warm by 1.5 degrees Celsius. “I don’t wanna die,” one of Joylaea’s classmates shouted out, which caused other children to join in, voicing the same horrible dread.

An angry Mrs. Blazevik demanded an explanation from the school for this psychological trauma episode. School spokesman Timothy Du Vernet attempted to placate the upset mother with a smooth-and-soothe rationalization regarding the Thunberg/carbon clock agitprop. He told Blazevik in an email that the presentation was meant to inspire students.

“The ‘message’ of her speech for our students was that they can make a difference and the future of our planet concerns our children most directly,” Du Vernet wrote. “It was not the intention to cause distress in our students. Climate change issues are facing all of us. (Joylaea)’s concerns and fears are the very reason we need to respond.”

Not the intention to cause distress? Au contraire; causing distress is precisely what the non-stop propaganda for a supposed, rapidly-approaching climate apocalypse is all about. The socialist doomsday apostles of anthropogenic (human-caused) global warming (AGW) are so intent on “completely transforming” the world that they have been more than willing to stoop to any means to terrorize children in order to turn them into fanatical, frightened foot soldiers in their green army.

It began in earnest with Earth Day 1970, but really went over the moon with Al Gore’s “documentary” travesty, An Inconvenient Truth, which hundreds of millions of kids in classrooms worldwide have been repeatedly force-fed. But Al Gore is “so yesterday,” and besides, his scandalous hypocrisy (gargantuan carbon footprint, global jet-setting, multiple mansions, lavish lifestyle, carbon credit investment scam, etc.) and ludicrous predictrions (see here, and here) have discredited him among even many of his erstwhile fans and allies. Time for a new star: thus the media propaganda saturation with the pigtailed Pippi Longstocking from Scandinavia.

Like a thundering Thor, the diminutive Thunberg has been hurling lightning bolts of invective at any and all who dare to ignore or resist her hectoring harangues to enact a Maoist-styled plan for global regimentation. Failure to follow her commands means mass extinction, death, the end of the world, she insists. Millions of traumatized children, youth, and snowflake adults are flocking to this media-manufactured superhero-guru-prophet-crusader.

We detailed the psychological damage being done and the subversive process being used by the United Nations, the establishment media, politicians, schools, and teacher unions in 2012, in our article titled, UN Summit: Transforming Your Kids into “Climate Change Agents.”  This past August, we produced a series of reports from the United Nations “Civil Society Summit” in Salt Lake City, which was used as a recruitment jamboree and a launch pad to prep hundreds of “youth leaders” from around the world for protests at the UN’s Climate Action Summit of World Leaders in New York in September. (See here, here, and here.) We also reported on the carefully orchestrated Climate Strike at the New York summit, starring Greta Thunberg (and featuring collusion of the New York Times, Mayor Bill de Blasio, and the New York City school system), in
UN Inciting Youth Rent-a-mobs for Globalism.

“Jimmy from Brooklyn,” the famous call-in guest on national radio shows such as Bob Grant, Rush Limbaugh, Hannity, Barry Farber, and Sebastian Gorka, has for decades pointed out that the communists and their allies create an issue (or seize an existing one) and then weaponize it, using the formula “radicalize, politicize, mobilize” to recruit young people as activists for their causes. The climate cultists are using the same formula, but immorally targeting the very young and vulnerable with fear and doomsday hysteria. They have adapted the formula: Terrorize, Radicalize, Politicize, Mobilize. Whatever works!

Here are a couple of the despairing quotes from an Associated Press story at the time of UN’s Climate Action Summit of World Leaders coming from from high school and college students who have been convinced by the unending drumbeat of climate doom that they have no future:

“Coming to terms with the fact that we have lived on a dying planet is terrifying,” said 18-year-old activist Kaylah Brathwaite, a Charlotte, North Carolina college student. “I’ll give speeches and I’ll cry…. I’m just going to have to be scared for the rest of my life.”

Max Prestigiacomo of Madison, Wisconsin and the Youth Climate Action Team, said as he left Saturday’s U.N. Youth Climate Summit in New York that “climate anxiety is justified” because politicians are doing nothing.

“A lot of us say we can’t think more than 16 months ahead because we don’t know the environment we will have to grow up with,” he said….

Adam Stater, a 15-year-old from Sewickley, Pennsylvania, wants to get more active about global warming but hasn’t yet. What he reads, he said, scares him. He wonders “if I will be able to live my life to the fullest. Will I get to be old?”

The Associated Press story, by veteran AP climate alarmist Seth Borenstein, finds no fault with the propagandists who are causing the climate hysteria, of course. Instead, Borenstein lauds those youth who have turned their angst over global warming into activism to save the planet. From angst to activism: Terrorize, Radicalize, Politicize, Mobilize.

Naturally, the New York Times had to get in on this act as well, as typified by its piece entitled “This Is Our Terrifying World,” which featured these quotes from terrified youths:

“It’s like the door is slamming and we’re trying to run in through that door right before it slams shut,” said hyper-anxious 17-year-old Jamie Margolin at the New York protest. She is identified as the founder of the climate-alarmist group This Is Zero Hour.

At London’s massive Climate Strike, the Times found Elijah McKenzie-Jackson, age 15, to voice what is, supposedly, the dire, heartfelt message of “Generation Z.” “I would like politicians and policymakers to actually hear students on the street who are terrified. Our planet is dying and I want them to find a solution. I want to go net zero by 2030…. I am terrified for the future….I feel like if I think about it too long, I won’t be able to do what I do.”

Trying to save the planet? No, it’s: Terrorize, Radicalize, Politicize, Mobilize.

What Does the Draft Document Look Like At the UN Conference? (Day 2 SLC UN Civil Society Summit)

UNESCO: The Global School Board

UNICEF: We Must Fight Climate Change — for the Children (of Course)