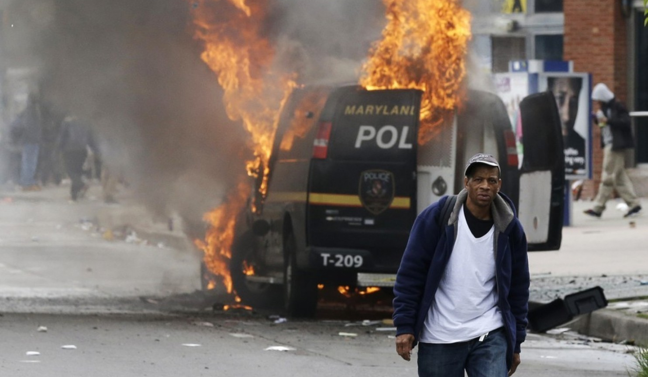 And so it begins.

Apparently oblivious to the fact that Democrat policies have driven the city of Chicago into a state of near-collapse, Cook County Commissioner Richard Boykin is now calling for United Nations “peacekeeping” troops to be stationed on the streets of America.

As you’ll hear in the video below, Boykin says that UN troops need to be brought into America’s cities as a way to help “victims of violence.” Utterly oblivious to the ramifications of foreign troops invading U.S. soil and occupying a U.S. city, Boykin is just the latest example of a hopelessly deranged Democrat, devoid of logic and reason, who seems to have no clue he just called for in invasion of the United States of America by foreign troops. (Or maybe he knows exactly what he’s doing, and it’s time to drop the hammer…)

“I’m hoping to appeal to the UN to actually come to Chicago and meet with victims of violence, and maybe even possibly help out in terms of peacekeeping efforts,” Boykin explains in the video below. (h/t to The Daily Sheeple)

When asked to explain further, he says that armed foreign troops / shock troops are necessary to “protect minority and vulnerable populations.” Via the video below:

[UN troops] have been able to help in places like Africa, where they have sent troops in, sent forces in, to help protect minority and vulnerable populations, so frankly I think the same can be said for here in Chicago. 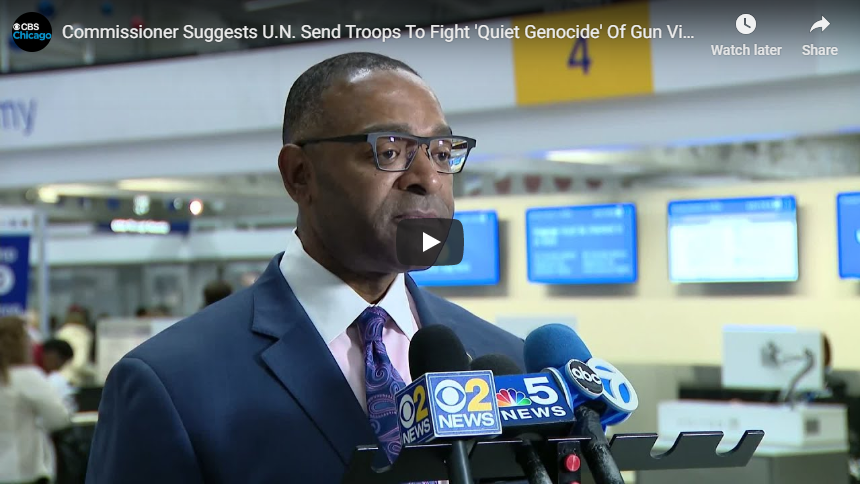 Dave Hodges and Steve Quayle have been right all along

For the record, independent media journalists Dave Hodges (TheCommonsenseShow.com) and Steve Quayle (SteveQuayle.com) have been warning about UN troops being unleashed on U.S. soil for many years. And for doing so, they have been derided as conspiracy theorists and lunatics (as have all independent media journalists, come to think of it). Yet here we have an open admission by a Chicago Democrat that this is precisely the plan. It’s no longer just a theory. It’s an admission of the plan.

Hodges wrote about this just yesterday, in fact, saying:

For years, The Common Sense Show has been diligent in exposing the existence of UN troops on US soil who are simply waiting for a pretext to emerge and enforce martial law as the opening salvo for the takeover of America… The Common Sense Show has learned from a previously utilized and high ranking and well–placed source, that occupation troops of the United Nations, stationed in Chicago plan to use the extreme tenets for the NDAA to indefinitely detain, without due process that they arbitrarily deem to be a potential problem. The list of detainees WILL NOT be confined to armed gangsters who are creating mayhem and murder in Chicago. The list of permanent detainees may include members of the Deep State opposition.

Stefan Stanford of All News Pipeline has also extensively covered this now-admitted conspiracy in articles like this one, writing:

UN troops and vehicles ARE here in America – but waiting for what? As Quayle tells us, this should be a huge ‘reality check’…there is no ‘reset button’ on what we’re now watching unfolding as the globalists prepare to put this experiment in liberty once known as ‘America’ to bed.

On Boykin’s on website, he explains, “There is no problem too big for us to solve… when we work together.”

By “working together,” of course, he means unleashing foreign troops on U.S. soil. This bypasses posse comitatus, which prohibits active duty U.S. soldiers from policing our own streets. By naming the armed UN invaders “peacekeepers,” Boykin is invoking deep deception about his true intentions (which is the military occupation and overthrow of U.S. authority).

The insanity of his recommendation is off the charts. He claims to need UN troops to stop “gun violence,” for example, yet fails to acknowledge that all the foreign troops will be armed, thereby bringing even more military weapons to the streets of America (to be aimed at U.S. citizens, of course).

“While no one can deny the fact that Chicago is essentially a warzone, the fact that a liberal city commissioner is planning to use United Nations peacekeepers to confront said violence should send shockwaves down the spine of any freedom loving American,” writes The Daily Sheeple. “Liberal leaders in Chicago are now openly planning to declare martial law, complete with UN shock troops on the streets to police the American population.”

All this on the heels of my warning from two weeks ago about military contractors being readied to lock down U.S. cities

Keep in mind this is all on top of my warning from two weeks ago, contained in the following audio podcast entitled, “Military contractors told to prepare for DOMESTIC deployment.” Listen to my warning in the podcast below, then continue reading below:

As you’ll hear in this podcast, some military contractors (former military operators who are now “free agents”) are being told that a domestic deployment is in the works soon, with a special emphasis on locking down cities and prevention the spread of social chaos. Individual who are high up in the intelligence chain, in other words, already know something big is in the works. I keep getting confirmations from multiple sources that this will involve unbridled civil unrest in large U.S. cities. What I don’t know, however, is the trigger event that’s going to set this off.

As far as the trigger event goes, your guess is as good as mine, but the fact that this is expected to unleash civil unrest across the cities — not the countryside — is an important clue. One educated guess about all this is that the Trump administration is about to announce mass arrests of corrupt Democrats across the country, perhaps related to widespread pedophilia and collusion among the deep state agents currently attempting a political coup against America. If this happens, half of America will cheer. But the other half will go insane and try to burn everything to the ground.

I’m writing this with careful precision, so please note that I am not endorsing or encouraging such kinetic conflicts, but I do have reason to believe that if United Nations troops are unleashed upon the streets of America, many armed Americans will actively seek them out and deliberately kill them.

Call it “America’s immune system,” if you will, in the sense that America’s defenders will be activated by the presence of foreign invaders on U.S. soil. Many police officers and soldiers have sworn an oath to defend the U.S. Constitution against all enemies, foreign and domestic. If UN troops are activated on U.S. soil, there’s no question this will be perceived as an active invasion of the homeland… and will be met with fierce resistance in all the ways you might imagine.

Again, I’m not endorsing or encouraging any particular actions, but I am analyzing the most likely outcomes from such a scenario. There’s no question in my mind that many of America’s Second Amendment defenders are going to see such “foreign occupation” as a GO SIGN for active elimination and / or expulsion of UN troops from U.S. soil. UN soldiers, in other words, will likely be actively hunted and killed on sight. (Again, for the record, this is an educated analysis, not an endorsement of such actions. Don’t quote me out of context.)

This, of course, may be precisely what totalitarian-minded Democrats like Boykin want to see happen, because once a few UN troops have been killed, all armed citizens can be designated “domestic terrorists,” justifying an even larger UN presence and occupation across America (combined with a nationwide call for gun confiscation, of course). The UN occupation, in fact, may be an attempted false flag operation to invoke an armed response (followed by nationwide martial law).

At that point, things probably devolve into a full-fledged guerilla war across America, pitting determined and heavily armed U.S. patriots against poorly trained, highly corrupt and barely-motivated UN troops (who are already widely known as child sex slave scumbags and rapists, all across Africa and Europe, by the way). The battle may not even last very long, as UN troops are no match whatsoever for determined U.S. military veterans and patriots. Many law enforcement organizations will even join with the patriots in such a scenario. Sadly, a lot of innocent Americans will likely be caught in the crossfire of all this, which brings me to my next point…

What will YOU do if your city is suddenly transformed into an active war zone?

The Cook County buffoon Boykin seems to have no clue about the unbridled bloodshed and violence he’s about to unleash, starting in his own city (Chicago). Apparently, he wishes to make Chicago ground zero for the next kinetic war in America. How he manages to convince himself this is somehow going to keep minorities safe is beyond all comprehension. Then again, in order to be a political leader in Chicago, you have to be incredibly irrational and somewhat deranged in the first place. To expect these people to logically think through their own demands is to expect the impossible. If they really knew what they were doing, after all, Chicago wouldn’t have already collapsed into something resembling a Third World country in terms of homelessness, widespread violence and economic collapse. (Chicago is right now the murder capitol of America, even though it is stupidly designated a “gun-free zone” by Democrats.)

My advice to everyone reading this? Sell your damn Bitcoin and buy some preparedness gear. Have a bugout bag and a plan to walk out of the city (yes, walk). If all this goes down, you likely won’t have any early warning whatsoever, and you may suddenly find yourself a prisoner of your own city, lumped in with a wave of armed scumbags and out-of-control hoodlums who are looting or raping everything in sight. And that’s just the UN troops I’m talking about, not even mentioning the inner city gangs yet.

That’s the day you’ll wish you had a compass, a reliable firearm, a hundred hours of training and several spare mags of ammo. If you’re not killed or molested by the UN troops as part of their “peacekeeping” recipe, you’re subject to being ransacked and murdered by the inner city gangs. Those who survive all this will be the men and women who can shoot attackers in self-defense, protect their homes and lives, and escape and evade the wave of human scumbags who are trying to occupy or destroy your city in the name of “peace.”

For my friends who are military contractors, by the way, this is one job you may want to pass on. Nine hundred bucks a day isn’t worth getting caught in a crossfire between UN troops and deranged gang bangers who have already sent all the cops fleeing. Even the ten loaded AR mags you normally carry on such short duration deployments still might not be enough. On top of that, your bosses will of course give you complete bulls##t RoE which means you can’t even defend yourself when you’re getting shot at. (Remember how infuriating that was in Iraq?)

Think twice before accepting any such assignment on U.S. soil, even if it’s offered at double or triple the pay rate. You can’t possibly carry enough ammo and steel plates to be safe in this scenario. Plus, this is of course the exact moment your super-duper high-end red dot sight will lose its zero, causing you to have to engage targets at night with your clunky iron sights which are also painted BLACK as night, which is why you probably never really practiced enough night shooting with iron sights. So you’re basically screwed at this point. A paycheck is meaningless if you don’t make it out alive.

Stay home instead and defend your life.