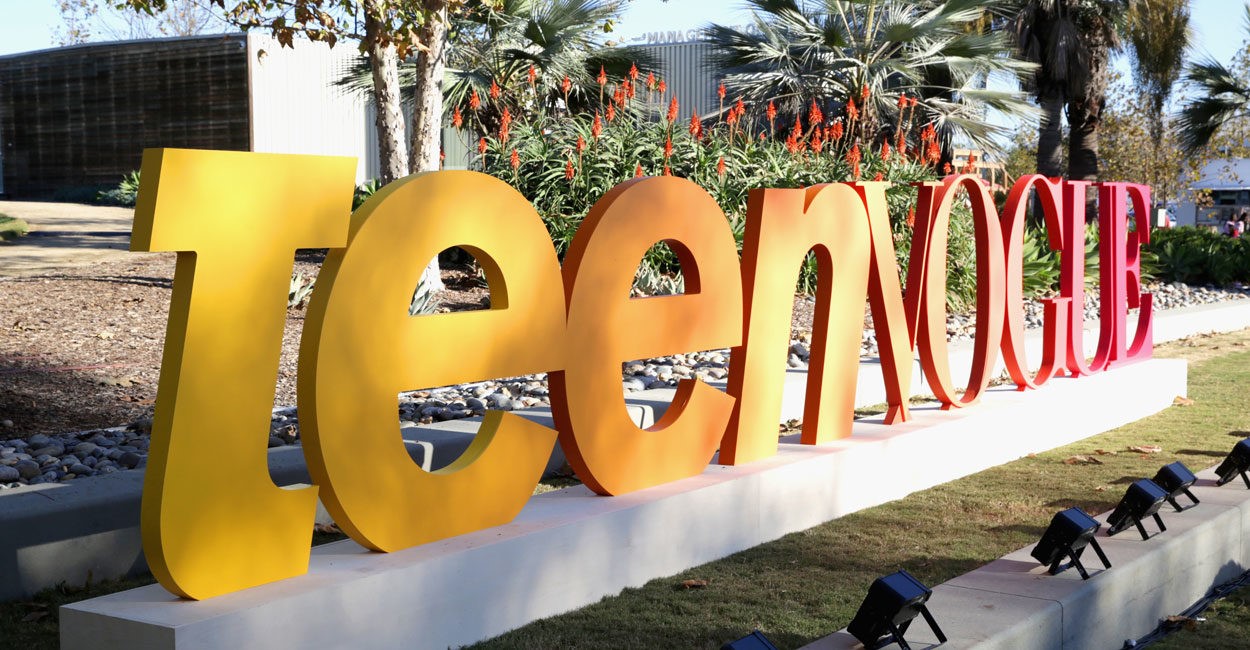 In 2019, Teen Vogue offered teenagers a chance to discover “How To Have Queer Sex,” “How To Use Sex Magic To Manifest Your Best Self,” “How To Get An Abortion If You’re A Teen,” and more. (Photo: Alison Buck/Stringer/Getty Images)

Teen Vogue churned out a variety of highly explicit sexual material for its teenage audience in 2019.

The publication has been described as a “glossy” magazine “aimed at teenage girls” that has recently stepped forward into the political spectrum to criticize President Donald Trump. But in 2019, Teen Vogue also offered teenagers a chance to discover “How to Have Queer Sex,” “How to Use Sex Magic to Manifest you’re Best Self,” “How To Get An Abortion If You’re A Teen,” and more.

Several of these stories cite Planned Parenthood, the nation’s largest abortion provider, as their source for health and sex tips. The stories are posted on Teen Vogue’s website, many are shared on Twitter, and some are highlighted on the publication’s Instagram page.

Critics of the publication say that Teen Vogue’s content is entirely unfit for its teenaged audience. Donna Rice Hughes, president and CEO of Enough Is Enough, an organization dedicated to making the internet safer for children, warns that Teen Vogue is driven by “a clear agenda to sexualize and exploit the minds of its young teen and tween readers during what should be a protected period of innocence.”

Next year, absolutely everything is on the line. Defend your principles before it is too late. Find out more now >>

Anti-trafficking activist Jaco Booyens says the publication’s content grooms young people and seeks to desensitize them to such explicit content.

“Our culture is in a dire state due to sexual immorality,” Booyens warned. “Introducing sexual acts and concepts with fluid language to desensitize our youth is without question grooming. Thereby the radical left such as Teen Vogue is playing into the hands of pedophiles, or doing so by design.”

Down to Find Out

Teen Vogue writer Nona Willis Aronowitz started the weekly column Down to Find Out in May, a column that explores a number of highly explicit sexual topics and launched on Aronowitz’s story: “How To Sext – Safely.” The column says it is intended to answer questions from readers, but this particular question about “digital consent” came from a Teen Vogue editor. 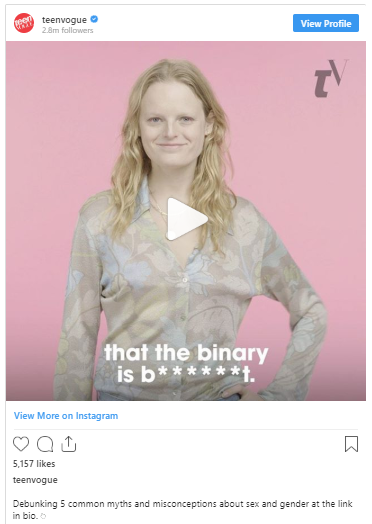 “Get very familiar with yourself,” the Teen Vogue writer encourages. “Pose in the mirror, caress your silhouette, know your naked angles…There’s virtually no risk involved in taking photos like these (though if you’re worried, there are always ways to double-password protect, or hide them in a remote folder on your phone). For now, these photos can be just for you.”

Aronowitz suggests that to protect their privacy, teens should share the photos with their partners in person or to sext their partner with words.

“As much as I love a well-executed nude, I’ve found that taking photos of myself in the moment, or on command, can be stressful or mood-killing,” she writes. “There’s also something kind of….literal about them. Instead, verbalizing my fantasies can allow some privacy and ambiguity while still experimenting with nascent desires.”

Obtaining an Abortion as a Teen

In her second installment of Down to Find Out, Aronowitz explains “How to Get an Abortion If You’re a Teen.”

As she addresses a question supposedly from an anonymous teen, the Teen Vogue writer warns that getting abortions as a teenager “can be tricky,” and that “having access to abortion should be your right, regardless of your parents’ beliefs.” 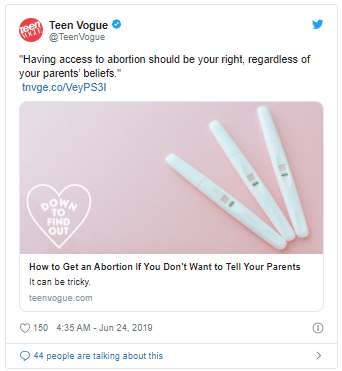 “Having access to abortion should be your right, regardless of your parents’ beliefs.”
http://tnvge.co/VeyPS3I

It can be tricky.

“I’m 16, I’m pregnant, and I don’t want to be,” an anonymous person questioned Aronowitz. “I’m not sure if I’m allowed to get an abortion without my parents’ permission, but I’m really scared to tell them because they are both against abortion. What should I do?”

Aronowitz answered the query by explaining her own sexual experiences at age 15, detailing an episode where she wondered if she might be pregnant. Aronowitz’s mother helped her get Plan B “without judging or admonishing” her, but Aronowitz worries that other girls won’t have the same experience.

“I’m here to tell you that you have nothing to be ashamed of. Accidents can happen even to the most careful among us,” Aronowitz wrote. “And it’s only logical that if teens are mature enough to become parents, they are mature enough to decide whether or not they want to give birth.”

If readers do indeed fear that their parents will not let them get an abortion, Aronowitz has advice for them. 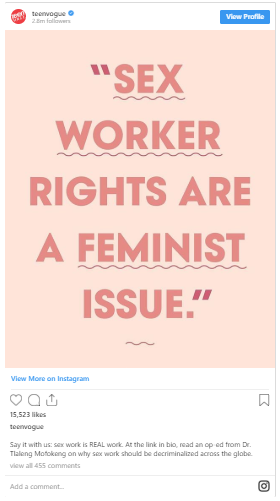 “There is a legal option in 36 states that would let you get an abortion without parental approval called a judicial bypass procedure—an infantilizing holdup to which nobody should have to resort,” Aronowitz wrote. The columnist added that these processes take time and money, and encouraged girls to get started quickly.

“So, what exactly is sex work?” Mofokeng asks. “Not all sex workers engage in penetrative sex, though, undeniably, that is a big part of sex work. Sex-worker services between consenting adults may include companionship, intimacy, nonsexual role playing, dancing, escorting, and stripping. These roles are often pre-determined, and all parties should be comfortable with them. ” 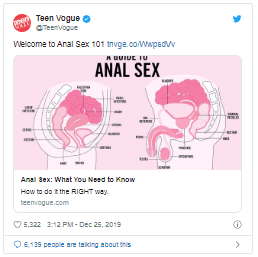 How to do it the RIGHT way.

The publication publishes a variety of other stories on sexual activity, as Engle notes.

Titles include “How to Use Sex Magic to Manifest Your Best Self,”—which promises to “Make your orgasms literally magical”—“How to Have Sex if You’re Queer: What to Know About Protection, Consent, and What Queer Sex Means,” and “Having Sex When You’re Fat: Tips on Positions, Props, and Preparation.” 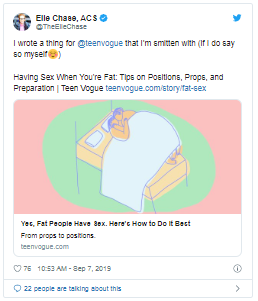 Yes, Fat People Have Sex. Here’s How to Do It Best

From props to positions.

“Yes, fat people have sex—and it’s great,” writes Teen Vogue writer Elle Chase, finishing her story with the line, “We all deserve to f— our fat hearts out.”

Hughes says that this particular line is “deplorable, and condemned Chase’s article as “an irresponsible and incomprehensible attempt.”

Enough Is Enough is committed to “raising awareness about these outrageous and irresponsible articles that permeate this online site so that parents and teens alike will #SayNOToTeenVogue,” Hughes told The Daily Caller News Foundation.

She encourages those who agree to sign a petition against the publication, which has garnered over 45,000 signatures since it was posted in August.

“Clearly,” Hughes says, “they care more about their own exploitive agenda than they do about our kids.”

Content created by The Daily Caller News Foundation is available without charge to any eligible news publisher that can provide a large audience. For licensing opportunities of this original content, email licensing@dailycallernewsfoundation.org.

As progressives on the far Left continue to push for greater government control under the disguise of “free stuff,” our lawmakers need conservative research and solutions to guide them towards promoting your principles instead.

That is why we’re asking conservatives to unite around the key values of limited government, individual liberty, traditional American values, and a strong national defense by making a special year-end gift to The Heritage Foundation before December 31.

Next year, absolutely everything is on the line. The Left won’t pull any punches. They stand ready to trade the principles of the American founding for the toxic European socialism that has failed so many times before.

That is why finishing this year strong is so critical. The Heritage Foundation is challenging you to rise up and claim more victories for conservative values as we battle socialism in 2020.

Mary Margaret Olohan is a reporter at The Daily Caller News Foundation.