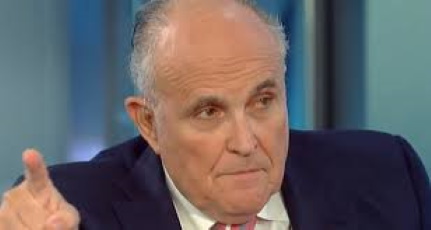 Anyone who has been paying any attention at all to the Democrat-led impeachment of President Donald Trump, and who is fair-minded, knows that the current occupant of the Oval Office did not commit any “high crimes and misdemeanors,” which is the constitutional standard for removing him from office.

But the reality is, Democrats aren’t really concerned about impeachment. They know that the president isn’t going to be removed because a) the Republican-led Senate will never convict him; and b) the real evidence will show that the president is innocent and his political detractors are actually guilty of ‘high crimes.’

In fact, presidential lawyer Rudy Giuliani has been busy uncovering a trove of new evidence of massive Obama-era corruption during recent trips to Ukraine, Hungary, and perhaps even Romania.

“Dem’s impeachment for innocent conduct is intended to obstruct the below investigations of Obama-era corruption:

Much more to come. 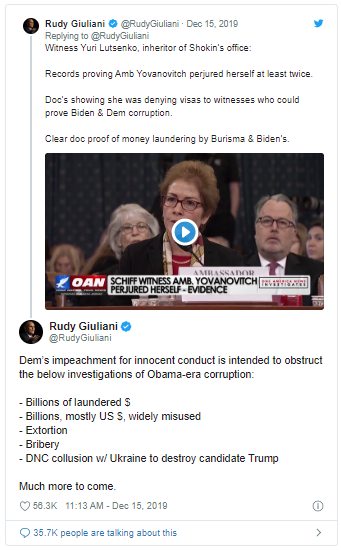 Doc’s showing she was denying visas to witnesses who could prove Biden & Dem corruption.

Dem’s impeachment for innocent conduct is intended to obstruct the below investigations of Obama-era corruption:

Much more to come.

Interestingly, just as the House’s impeachment inquiry moved to the Judiciary Committee so that another blatant Left-wing partisan, Rep. Jerrold Nadler of New York, the chairman, could have his turn at perpetuating the hoax, Giuliani traveled back to Ukraine in search of additional evidence of corruption.

As The National Sentinel reported, he found it.

Last week ahead of a campaign event in Florida, President Donald Trump told reporters that Giuliani had traveled back to Ukraine and that he had “found plenty” of “good information” during his trip there and to other European countries. The president added that he believes Giuliani wants to present a report to the Attorney General William Barr and to Congress regarding his findings.

But a One America News Network correspondent traveling with Giuliani reported that the former NYC mayor and federal prosecutor was provided with a trove of damning information on Joe and Hunter Biden as well as other Obama-era officials. (Related: Corporate media desperately trying to bury the facts about Joe Biden’s corruption, bribery and money laundering.)

— One Ukrainian official handed over official communiques and documents he says proves that Obama’s U.S. Ambassador to Ukraine and ‘impeachment witness’ Maria Yovanovich perjured herself during her recent testimony before a House committee;

— Another Ukrainian official, Victor Shokin, the former prosecutor general, described how then-President Petro Poroshenko waltzed into his office during the Obama administration and told him he had to stop investigating Hunter Biden or the country would lose a billion dollars in aid, as Joe Biden threatened (Shokin was summarily fired, as Joe Biden bragged);

— There are dozens of inquiries open into possible misallocation of U.S. funds in Ukraine, with the U.S. Embassy’s involvement.

Tracking down Ukrainian witnesses we collected hrs. of testimony, documents, and stunning revelations.

Seems Dem impeachment set loose a chaos from which they are unlikely to recover.

If anyone demanded a “quid pro quo” from Ukraine, it was Joe Biden. And he did it on behalf of President Barack Obama, since he was the “point man” for that country.

The former VP said so on video. He blatantly admitted it, and yet, Democrats and their garbage media are pretending as though Biden never made the statement let alone the threat.

— A Ukrainian official has said that Joe Biden was paid nearly $1 million in “lobbying fees” while son Hunter made “millions” in fees as a board member for a corrupt Ukrainian energy company (the one Shokin was attempting to investigate);

— The Obama administration was informed by an official from the State Department that Hunter Biden’s sweetheart deal with Burisma was problematic.

The official, Deputy Assistant Secretary of State George Kent, testified before a closed congressional hearing that he was concerned how Hunter Biden’s position with Burisma looked and that it “would complicate efforts by U.S. diplomats to convey to Ukrainian officials the importance of avoiding conflicts of interest,” according to the Washington Post.