No other issue facing us today can take down our beloved country as we’ve known it literally overnight like the proposed Convention of the States which would actually be a constitutional convention (con-con) no matter what they want to call it.

Legislators should not be taken in by professionally prepared hype based on ‘doctored’ information presented as fact. Legislators need to ‘patriot up,’ do the hard work and do right by their oath to follow and protect our wonderful Constitution.

In the first place, why should anyone believe new amendments will be followed any more than current law? It’s illogical to think that adding or changing rules will compel chronic rule-breakers to follow new rules. What are they going to say, “We really mean it this time?”

There are many good reasons why for 232 years America hasn’t had a new national constitutional convention (con-con). Historically, Americans have understood that a con-con will set its own rules, its own agenda and can even change the ratification process just like they did in 1787. This is how we got our current Constitution.

Salivating, originating forces of the many different calls really just want the door to a Con-Con opened, understanding full well once they’ve convened they can change anything and everything. These are very devious people with clandestine designs for our future who are being followed by the naïve and over trusting.

Legislators should not fall for poker face promises & hyped un-researched proclamations. They need to do the research, the hard work themselves. They owe it to us, their constituents that hired them for the sake of all our grandchildren and America’s future freedoms. Aren’t you curious why there are so many different organizations all calling for single issue Con-Con’s? As Vince Lombardi would say, ‘What the Hell is going on here!’

State Legislators cannot control what will happen if an Article V Constitutional Convention is called. The Congressional Research Service says a likely scenario is that delegate apportionment would be based on the Electoral College model, which would give Idaho, for instance, FOUR delegates out of 535!

Black’s Law Dictionary is America’s most trusted law dictionary. Its definition of a constitutional convention: “A duly constituted assembly of delegates or representatives of the people of a state or nation for the purpose of framing, revising, or amending its constitution.” Renaming it a “Convention of States” doesn’t change what it is.

Beware of false Constitutionalist. The Federalist Papers are not government documents. Our Constitution reigns. They’re making many assertions about state legislators being in control of the process that are simply not supported by Article V and are disputed by the Congressional Research Service, numerous law professors, constitutional scholars and judges who have warned about the dangers of a modern convention and the damage it could do to our Constitution and Bill of Rights.

In this beyond highly politicized world today, who in their right mind would believe convention delegates would send the results to state legislators for endless debate and legal challenges lasting months or maybe years for such ratification? They would select like-minded delegates for ‘safe’ special ratifying conventions with hand-picked members, all with special interest baggage, who will do the convention’s bidding. Legislatures won’t have a chance. Ratifying conventions are the stacked deck these slick designers are counting on and would be a rubber stamp. [Utah’s legislature would not have repealed Prohibition. The rules for Article 5 were used to pass it through a ratifying Convention.]

Quoting Joe Wolverton, II, J.D. of The New American magazine, “The various purportedly unrelated efforts by self-professed conservatives, socialists, and progressives to call for a new constitutional convention are moving forward. Many otherwise well-meaning state legislators are falling for their common line that such a convention is the only way to save the Republic.

“The self-professed conservatives, on one hand, insist that if a new convention isn’t held, the growth of the federal government will go on forever until all power is consolidated in Washington, D.C.

“Their socialist and progressive collaborators, however, are pushing for an Article V convention as a means of finally changing all the things they believe are wrong about our form of government.

“Rhetoric and political leanings aside, the result of either scenario is a new Constitution. Of course, the Convention of States (COS), the Compact for America, and other Article V proponents on the right, argue up and down that they are not calling for a new constitutional convention. Then, as if that weren’t enough, they criticize those of us who oppose their movement for being “false constitutionalists,” and for believing that the Constitutional Convention of 1787 was a “runaway” convention.”

We don’t have a constitution problem, we have an adherence problem. The ‘fix’ is following law, law enforcement and nullification. These are the real serious efforts that would surely work and needs being done, especially a lot of nullifying of unconstitutional laws & regulations such as former Idaho Governor Otter’s nullifying future federal gun laws in the state of Idaho. See the article “Praise Be to Governor Otter“  at GemStatePatriot.com. 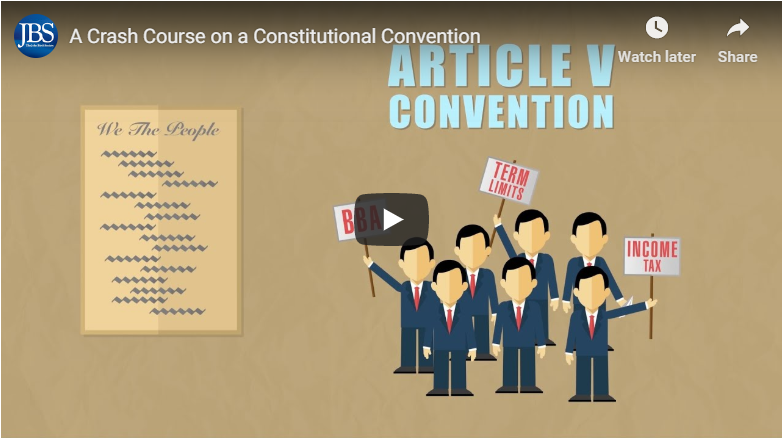 REVEALING FACTS ON APPLICATIONS AND RESCISSIONS

The simple reason there has been historically so many forthright rescissions to states’ calls for conventions is that the states eventually came to their senses and recognized the formidable dangers of a convention.

Given the numbers of applications it’s amazing that we’ve been blessed with forthright rescissions prevailing like they have due to awakenings of the fatal dangers a Con-Con would pose to our Constitution if one were called.

Quoting Christian Gomez’s article ‘Justice Scalia’s Warning of a Constitutional Convention’ in The New American.com: “During the question-and-answer session following a speech Scalia gave to the Federalist Society in Morristown, New Jersey, on May 8, 2015, he was asked whether a constitutional convention would be in the nation’s interest.

“‘A constitutional convention is a horrible idea,’ Scalia replied. ‘This is not a good century to write a constitution.’

“Although COS might have one believe that a constitutional convention is a ‘different creature entirely‘ from an Article V convention or ‘convention of the states,’ as they call it, this is simply not true.” – These were Justice Scalia’s most recent stated views.