DOJ IG Report: What Did Obama Know And When Did He Know It? 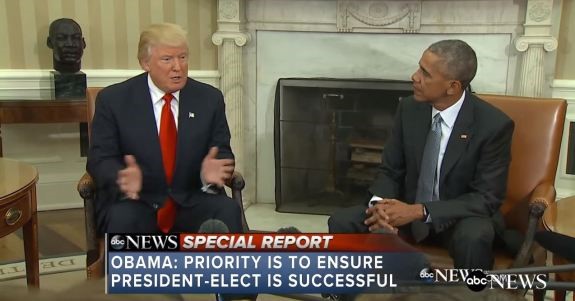 DOJ IG Report: What Did Obama Know And When Did He Know It?

We know from the Lisa Page – Peter Strzok text messages and other electronic communications that the Obama White House was interested, perhaps intensely interested, in the Hillary Clinton email investigation and the FBI surveillance and investigation of Donald Trump’s 2016 presidential campaign.

What has yet to be revealed up until now is who at the Obama White House was in the loop on the surveillance and investigation.

What the Department of Justice Inspector General’s report on Operation Crossfire Hurricane has revealed is that Obama himself was brought into the loop at a very early stage of the investigation – sometime in August 2016.

On page 77 of the report, the Inspector General revealed that:

McCabe’s notes from a morning meeting with Comey and others in late July 2016 reflect that McCabe learned from Comey during the meeting that another U.S. government agency had briefed President Obama on intelligence that agency had suggesting that a RIS was engaged in covert actions to influence the U.S. presidential election in favor of Trump. McCabe told us he did not attend this White House briefing; however, based on his notes, he said he did not believe the FFG information would have been discussed during this meeting, and our review of his notes did not indicate otherwise. According to McCabe’s notes of what he had been told by Comey, President Obama stated that the FBI should think about doing “defensive briefs.” The notes do not provide any further details about what Obama said regarding defensive briefings, and McCabe told us he did not recall that any further details were provided to him. However, McCabe said he surmised from his notes that the briefings under discussion were to be given to the Trump campaign. As more fully described in Chapter Ten, the FBI participated in ODNI strategic intelligence briefings that were provided to members of both the Trump campaign and the Clinton campaign, including the candidates, in August and September 2016. However, those were not defensive briefings and did not address the allegations contained in the FFG information.

When we asked Comey about meetings with the White House concerning Crossfire Hurricane, he said that although he did not brief the White House about the investigation, he did mention to President Obama and others at a meeting in the Situation ·Room that the FBI was trying to determine whether any U.S. person had worked with the Russians in their efforts to interfere in the 2016 U.S. election.  Comey said he thought it was important that the President know the nature of the FBI’s efforts without providing any specifics. Comey said although he did not recall exactly what he said, he may have said there were four individuals with “some association or connection to the Trump campaign.” Comey stated that after he provided this information, no one at the meeting responded or followed up with any questions. Comey did not recall specifically when this meeting took place, but believed it may have been in August 2016. We were unable to determine whether this meeting was part of the same meeting reflected in McCabe’s notes discussed above.

That recitation of Comey’s recollections of his conversation with President Obama continues his very, very selective memory of events regarding Crossfire Hurricane. However, as the report makes clear this was hardly the end of Obama’s interest in the Trump investigation.

On page 177 the report explains:

According to the Supervisory Intelligence Analyst (Supervisory Intel Analyst), the FBI first shared Steele’s reporting with other U.S. government intelligence agencies in December 2016, when the FBI provided it to an interagency ICA drafting team that was set up in response to a request from President Obama to complete a comprehensive assessment of the Russian government’s intentions and actions concerning the 2016 elections. 323 Members of the interagency ICA drafting team from the FBI, National Security Agency (NSA), and Central Intelligence Agency (CIA), with oversight from the Office of the Director of National Intelligence (ODNI), worked jointly to prepare a report known as the Intelligence Community Assessment {ICA). As part of these efforts, both Priestap and the FBI’s Section Chief of CD’s Analysis Section 1 {Intel Section Chief) wrote to the CIA in separate correspondence and described Steele as “reliable.”

The Intel Section Chief told us that he asked then Deputy Director Andrew McCabe whether McCabe wanted to limit the FBI’s submission to information concerning Russian election interference or to also include allegations against candidate Trump. The Intel Section Chief said that McCabe understood President Obama’s request for the ICA to require the participating agencies to share all information relevant to Russia and the 2016 elections, and the Steele election reporting qualified at a minimum due to concerns over possible Russian attempts to blackmail Trump.

We note for the record that by December 2016, after Trump had won the election, many aspects of the Steele dossier had been debunked or deemed completely unverifiable, but that McCabe wanted the particularly juicy (and least verifiable) parts included in the briefing for President Obama.

On page 179 the report states:

Of course, there’s another possible motivation – including the sexy parts of the Steele dossier in the briefing would almost guarantee that it would leak, which it of course did, like it was intended to.

Finally, there’s this possible confirmation that the continued inclusion of the Steele dossier in the intelligence on Russian interference in the 2016 election was an Obama White House set-up:

On January 5, 2017, Clapper, then NSA Director Michael Rogers, Brennan, and Comey briefed the ICA report to President Obama and his national security team, followed by a briefing for Congressional leadership on the morning of January 6, 2017, and finally a briefing for then President-elect Trump and his national security team on the afternoon of January 6, 2017. Comey told the OIG that the plan for the ICA briefing of President-elect Trump had two parts. The first part of the briefing, jointly conducted by Clapper, Brennan, Rogers, and Comey, involved advising Trump and his national security team of the overall conclusions of the ICA. The second part of the briefing involved notifying the President-elect of information from Steele’s reporting that concerned Trump’s alleged sexual activities in Moscow several years earlier.

The FBI had had the Steele dossier since before the election, indeed they had cut Steele loose for leaking to the press back in October 2016. But they were just getting around to telling Donald Trump about it on January 5, 2017.

Why did they hold it back? Were they directed to do so until it would do maximum damage to the President-elect? One thing is certain, this series of briefings was the source of the notorious leaks to the media of the “salacious and unverified” material in the Steele dossier.

Like many other matters related to Operation Crossfire Hurricane there are hints here that the FBI wasn’t running the investigation by itself and that there were other influencers at work. Who were they? Director of National Intelligence James Clapper? The vile Trump-hating CIA Director John Brennan? Obama’s lying, politically corrupted National Security Advisor Susan Rice?

We urge CHQ readers and friends of civil liberties of whatever political stripe to call Senator Lindsey Graham, the toll-free Capitol Switchboard number (1-866-220-0044), tell him that you want him to undertake an investigation to establish who at the Obama White House was involved in Operation Crossfire Hurricane and what Obama knew and when did he know it.