The Sad Tale of Greta the Pawn 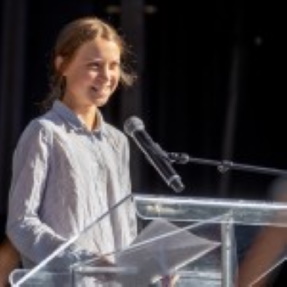 The Sad Tale of Greta the Pawn

As everyone expected, Greta Thunberg, 16-year-old Swedish teenager, was chosen as Time magazine’s Person of the Year.  Greta is a young lady who has taken a considerable amount of abuse from climate-change skeptics, which is very sad given that she purportedly suffers from Asperger’s Syndrome, a challenging disorder usually caused by an injury to the brain during pregnancy or birth.

Technically speaking, Asperger’s Syndrome falls under the ASD (autism spectrum disorders) umbrella, which includes a wide-ranging number of subsets, such as autism, high-functioning autism, Asperger’s Syndrome, non-verbal learning disability (NVLD), and many iterations in between.

I have a pretty good layman’s understanding of autism spectrum disorders, and I can say unequivocally that these conditions almost always make life extremely difficult — often unbearably so — for both victims and their families.

The one characteristic common to all ASD disorders is a lack of social skills.  In the musical West Side Story, there’s a song titled “Gee, Officer Krupke” with a verse that goes like this:

Gee, Officer Krupke,
We’re down on our knees,
‘Cause no one wants a fella with
A social disease.

You can’t help but smile when you listen to the words to this humorous ditty, but whenever I hear the above verse, I think of children with autism spectrum disorders, because ASD really is like having a “social disease.”  It’s a very difficult problem for an afflicted child, because it subjects him to teasing and bullying by both classmates and teachers, which in turn makes caring for a child on the ASD spectrum a frustrating, fulltime job for parents.

Knowing the pain ASD children endure and the difficulty they have interacting with others, watching Greta Thunberg’s angry speech at the United Nations was all too familiar to me.  At a minimum, her anger seemed completely out of proportion to the occasion (“How dare you?”), and her words demonstrated an extremely depressing outlook on life.

It is certainly understandable why children afflicted with a condition on the autism spectrum are angry, given the amount of rejection and frustration they experience, and in that regard I feel a great deal of compassion for Greta.  Nevertheless, it’s obvious that her anger and depressing outlook have been made much worse by negative thoughts put into her mind by the influential adults in her life.

These adults have clearly saturated her with the notion that the world is doomed as a result of “climate change,” and that climate change, in turn, is caused, first and foremost, by fossil fuels.  Since the minds of ASD victims function in a very primitive, concrete manner, feeding them such negative thoughts only worsens their anger issues.

Obviously, it was ridiculous for Time to name Greta Thunberg its Person of the Year, but I doubt many people take this award any more seriously than they do the Nobel Peace Prize.  Regardless, it’s not Greta’s fault that Time chose her for its annual award.  It is the fault of her parents, teachers, the media, left-wing politicians, and liberal activists who have stoked her anger and her macabre view of life.

Unfortunately, President Trump chose to chime in on Greta Thunberg’s newfound fame, which has brought an angry backlash from many quarters.  Like so many of his questionable tweets, there’s no doubt he would have been better off to have avoided commenting about Greta, but I think it’s a stretch to believe he was attacking her disability, because I doubt he even knows much about Asperger’s Syndrome.

Regardless, those who are upset about Trump’s comments regarding Greta Thunberg fail to take into account that she is not speaking as a disabled child, but as a political activist, which casts her in a whole different light.  Of course, the reason she’s a political activist is because not only are her parents and teachers pushing her in that direction, she is also being used as a pawn by the leftwing media and Radical Leftists.

It’s similar to the radical Islamic strategy of using women and children as human shields when attacking their enemies.  It’s a cowardly, age-old tactic employed by radicals of all stripes and, unfortunately, a significant percentage of the population can always be counted on to fall for it.

It’s very painful for a parent to come to grips with the reality that their child’s condition can never be cured or made less painful by medication or a medical procedure.  However, with nurturing, teaching, patience, and a positive, low-stress environment, children afflicted with ASD disorders have a much better chance of adapting to the rigors of life and achieving a reasonable degree of happiness.

Unfortunately, that is not likely to happen in Greta Thunberg’s case, because she appears to be trapped in a depressing, low-information environment.  It’s hard enough to try to educate low-information liberals who do not have disabilities, so the prospects for replacing the poison in young Greta’s mind with actual facts and a positive outlook on life are slim.

It’s a sad irony that because her thoughts are being guided by the Radical Left adults in her life, it is highly unlikely that this anguished teenager will ever be in a position to learn the facts about the climate-change hoax, the very subject she is so angry about.  What the adults in Greta Thunberg’s life have done to her is nothing less than emotional child abuse, and the thought that she is unlikely to be exposed to information that could help her become a less stressed, happier person is a human tragedy.