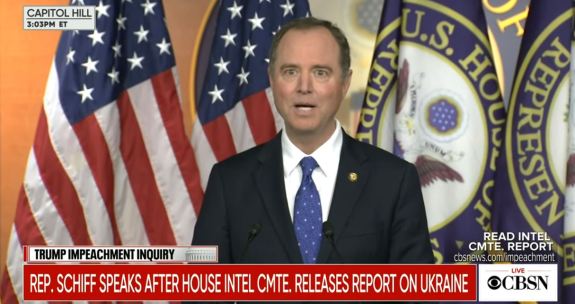 As regular readers of CHQ know, we are frequently critical of the House Republican leadership for their often-pro forma opposition to the Far-Left Democrat majority.

However, the Republican leaders of the House Intelligence, Oversight and Foreign Affairs Committees, and their incredible staff people who burned the midnight oil over Thanksgiving weekend, performed above and beyond all expectations in their preparation of the Republican “Report of Evidence in the Democrats Impeachment Inquiry in the House of Representatives.”

The 123-page report exhaustively reviews the allegations and evidence and correctly concludes that, “The evidence obtained in the Democrats’ impeachment inquiry, however, does not support these Democrat allegations.”

Most damning, however, is the point-by-point demolition of the Democrats’ claims through the testimony of their own witnesses.

In fact, notes the report, witnesses called by the Democrats denied having any awareness of criminal activity or an impeachable offense. Rep. John Ratcliffe asked Ambassador Bill Taylor and Deputy Assistant Secretary George Kent whether they were “assert[ing] there was an impeachable offense in [the July 25] phone call. Neither said there was. Rep. Chris Stewart asked Ambassador Marie Yovanovitch if she had any information about President Trump’s involvement in criminal activity. Ambassador Yovanovitch said no. Rep. Ratcliffe asked National Security Council (NSC) staff member LTC Alexander Vindman and Office of the Vice President special advisor Jennifer Williams if they have labeled the President’s conduct as “bribery.” Both said no. Rep. Elise Stefanik asked Ambassador Kurt Volker, the U.S. special envoy for Ukraine negotiations, and Tim Morrison, the NSC senior director for Europe, whether they saw any bribery, extortion or quid pro quo. Both said no.

The report also knocks down the allegation that President Trump pressured President Zelensky to investigate Joe and Hunter Biden.

As the transcript of the call details, President Trump transitioned the call to discuss the allegations that some Ukrainian officials sought to influence the 2016 U.S. presidential election. Democrats have labeled this a conspiracy theory, even though the Ukrainian Ambassador to the United States, Valeriy Chaly, actually wrote an op-ed in The Hill criticizing Trump at the height of the 2016 campaign.

This reading, the report notes, is supported by President Trump’s subsequent reference to Special Counsel Robert Mueller, who had testified the day before about his findings, and to Attorney General William Barr, who had initiated an official inquiry into the origins of the U.S. government’s 2016 Russia investigation.

As of CHQ’s deadline, Democrats have not released draft articles of impeachment, however a CNN legal expert, Left leaning former federal prosecutor Elie Honig, outlined what seems to be the Democrat punditsphere’s list: The first article of impeachment, he said, will state that the president should be impeached because he abused his power in asking the president of Ukraine to investigate former Vice President Joe Biden and Biden’s son.

As the transcript of the call proves, this is false.

There will be a second article for impeachment, Honig predicted, for obstruction of Congress—meaning that Trump tried to impede Congress’s efforts to investigate the phone call he had with Ukraine’s president.

This again is false; Trump released the transcript of the call.

Honig added that there may be a third article tied to former Special Counsel Robert Mueller’s investigation into the Trump campaign’s purported ties to Russia. Noting a sentence in Schiff’s letter transmitting the inquiry to the House Judiciary Committee that said Trump “again” sought help from foreign powers to interfere in U.S. politics. The word “again,” Honig argued, is the clue.

As the Mueller Report concluded, and Attorney General Barr subsequently determined, there was no factual basis for that allegation and, on the merits, no crime with which to charge the President.

If the charges Mr. Honig has speculated will be the core of the Democrats’ articles of impeachment are indeed what the Democrats transmit to the Senate, how will they overcome the facts documented in the Republican report and the Mueller report and the use of presidential powers the Framers put in the Constitution and the courts have recognized since the dawn of the Republic?

The answer was provided yesterday by Calvin Woodward of the Associated Press: Impeachment a political judgment call, crime not required.

To review the Democrat Rep. Adam Schiff’s 300-page report use this link.