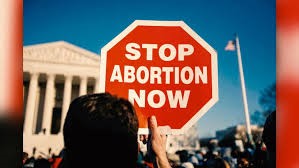 In this 3rd part of a 4 part series on the pending Idaho bill named the Abortion Human Rights Act (AHRA) co-sponsored by Dist. 1 Rep. Heather Scott and Dist. 2, Rep. John Green, Rep. Scott opened her remarks stating that other events like this across the state had great response to their bill and she believes this response will continue.

Green and Scott were assisted in their presentation by Sagle, Idaho activist Scott Herndon to a large audience of devout Christians at the Candlelight Church on Nov. 18th in Coeur d’Alene, Idaho.

“As Christians, we need to understand that there’s problems with other abortion bills as well as this bill,” revealed Scott. “The difference is, I think they touched on them a bit, but this bill will end abortion. Any other pro-life bill that I have seen, (the heartbeat bill, whether it’s the day before, 22 weeks, or the day after, or only in these circumstances) they do not end abortion. They continue to allow it in the state of Idaho. And that’s what’s different about this bill. What I’ve come to understand is that a lot of these pro-life groups are taking a secular pro-life position when it comes to abortion. Because any position that allows circumstances or for any reason doesn’t end abortion is a secular pro-life view. They are allowing man (men or woemen) to define when it’s okay. They are allowing legislators to decide, well, this situation is okay and this situation is not.”

“So the big question I get is, ‘What can I do to help?’ ‘How can we get involved?’ ‘How can we stop abortion in the state?’ The very first thing I think we as Christians need to do is we need to start with prayer. Realize that only God is going to open people’s eyes. Only God is going to change people’s hearts.  And so pray that God will open people’s eyes, open their hearts. Pray for the hearts and minds of these legislators that really think their pro-life. But when it comes down to it, they’re allowing man to define when life begins. 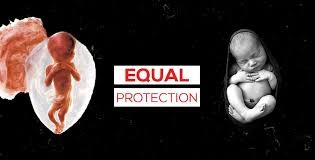 “I don’t know if you caught the legal lingo, but basically our state law says a fetus in the womb is a baby. We define it as a baby. But then we say it’s illegal to kill that fetus unless you’re a woman or a doctor doing it. And that’s what the state law says in simple terms.

“So pray for the hearts and minds of legislators, pray for the leaders of the secular pro-life groups. Pin them down where they stand on this issue. A lot of industry has been built over pro-life and I sense that some of our biggest opponents in Boise has been so-called pro-life groups. I know that’s hard to believe, but we have one gentleman down there that brags that he is the one that stopped our bill from being heard at the committee. And so pray for these leaders, that they are going to have a heart change and they’re really going to open their eyes. 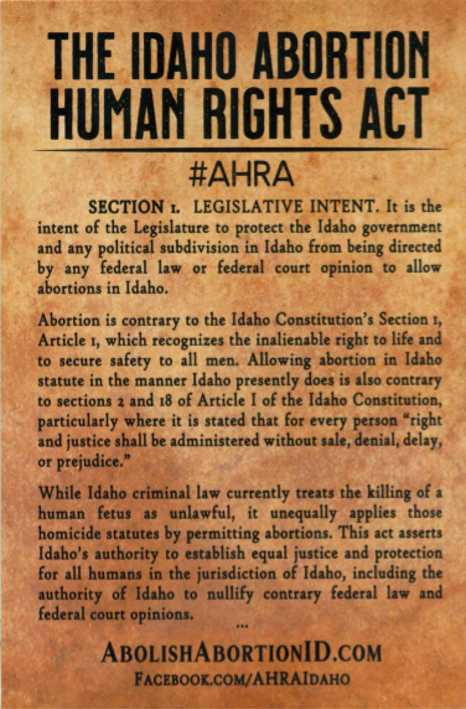 Scott told the attendees that the number two thing they could do is make sure before they leave that evening was that they should understand the bill thoroughly so they could help educate others. She told them they don’t have to be an expert and have to know all the stuff they (the speakers know).

“So if anybody asks you what does this bill do? It completely ends abortion.”

Scott repeated that what the law states is that a fetus in the womb is a baby and to kill the fetus is murder, but giving it an exemption from prosecution if you’re a mother or a doctor using that sanitized word for murdering called abortion is wrong.

She said the third thing people can do is realize that only God’s love can change the hearts of men.

She encouraged everyone to pray and educate themselves on the bill and then talk to friends and neighbors. They also were told to be sure and get some of their AHRA informative cards, which are simple to understand explaining the intent of the bill and what it does by giving some basic talking points.  “You know the talking points, don’t you? Abortion is murder,” she reminded them.

“What will this bill do?” questioned Scott.  “It will end abortion in Idaho.”

“The fourth thing you should do is get some of these cards and give them to members of your church and other friends who belong to other churches and encourage other pastors to get this information in front of their churches.  This is definitely a church problem because churches are our spiritual leaders in our communities.  If they don’t stand up, why would people stand up?

“Go to the website mentioned on the bottom of the cards where you can get more facts and more information so you’ll be able to explain to other Christians the difference between a secular pro-life view and the biblical pro-life view. I think you know what that is now. Be able to address their concerns with the exceptions of rape and incest. That will be your first question. Will this bill allow women who have been raped to have an abortion? So know that answer. 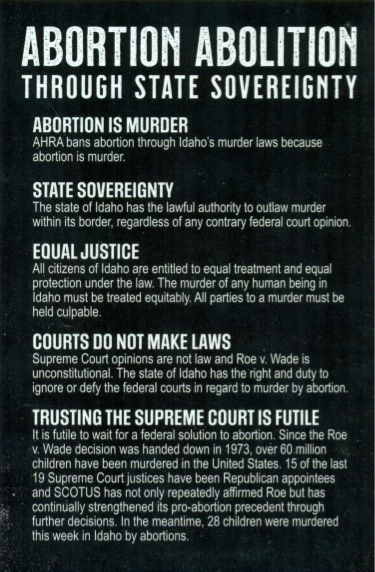 “And then be kind to others who have committed murder by abortion. I think there are a ton of people in our communities that know abortion is wrong. Some of them have gone through it, they have a testimony that they’re petrified to share because they haven’t dealt with it. So be kind to them, remind them that once they’ve asked for forgiveness that God won’t even remember it. So get them over the hump and get them to join our fight.”

Scott said the fifth, and last thing, people can do is educate and support their specific legislators and get them back into the positions.

She pointed out that John Green asked who is in District 2, and she said she will ask a better question. She asked, “Who has no idea what legislative district they are in? Find out what district you’re in, who your legislators are that represent you in Boise and educate people on this bill by calling them and emailing them now before session. Once January starts it’s going to be too late. You need to get them on board now. Don’t settle for lip service. I can’t tell you how many legislators put out all their campaign material and say ‘Yeah I’m pro-life.’

“I will guarantee you that a pro-life group out of Boise will give $1000 to every pro-life legislator up here. And this is the same pro-life group that ran an abortion bill a few years back. They will promote people and say their pro-life. So don’t just settle for lip service from your legislators. Get them to commit, get them to co-sign on this bill with us.  How great would it be if we had all North Idaho legislators with their signatures on this bill? And then support the good legislators that will stand up for this.

“The good thing is that there are a lot of really good folks out there that know the truth on abortion. They know that abortion is the murdering of a live baby at any stage, and that it’s never okay to take a life. They’ve known for a long time that there are a ton of people that have been in this fight, and you know what?  It’s not getting any better.  There are still thousands of babies killed daily. It’s not getting fixed so it’s time that we as a church or we as people stand up for this. The very first thing in our Constitution says we are going to protect life in the simplest form.

“This bill would do in one day with these pro-life groups have been trying to accomplish for years, for 50 years. So let’s get this done, it’s not that hard to do. I pray that you get behind this legislation. Thank you.”

“The Legal Perspective on Abortion being Murder in Idaho: Support the AHRA” – Part 2 of 4 Part Series