Raging at Candidates’ Whiteness after the Exit of Harris, Leftists Show Their Caucaphobia 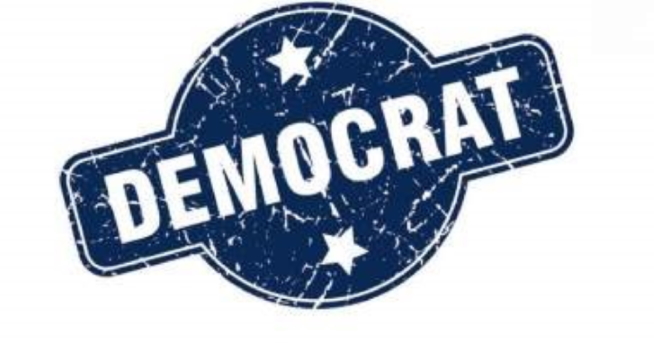 Raging at Candidates’ Whiteness after the Exit of Harris, Leftists Show Their Caucaphobia

They didn’t exactly echo writer Susan Sontag and call whites “the cancer of human history,” but many left-wing pundits do apparently consider Caucasian Democrat candidates a pox on the presidential primaries. That is to say, with Senator Kamala Harris (D-Calif.) exiting the race, Caucaphobic liberal commentators are raging against the whiteness of the remaining Democrat field — and are on the supposed “racism” of the Democrat electorate like white on rice.

The departure of Harris means that the next Democrat debate looks to be an all-white affair. Reacting to this, writer Sally Kohn, melanin-deprived herself, tweeted: 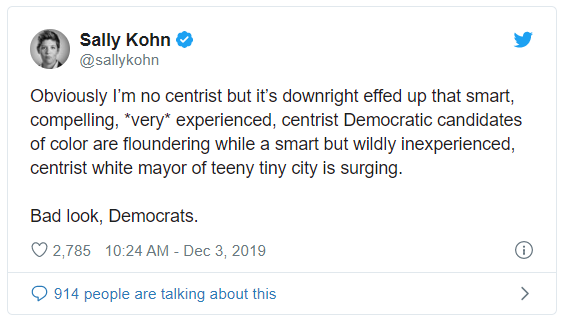 Not to be outdone, left-wing journalist Lauren Duca — who’s also white and calls herself a “pothead dyke” — contended that the Democrats have a “racism” problem (without citing herself as Exhibit A). She tweeted: 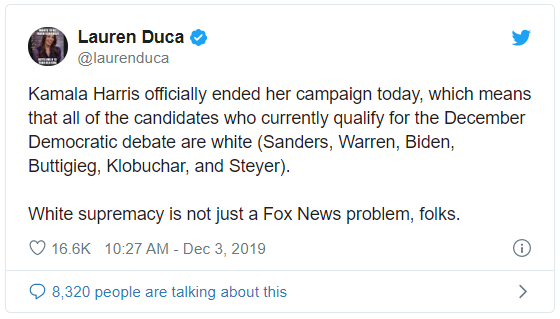 Kamala Harris officially ended her campaign today, which means that all of the candidates who currently qualify for the December Democratic debate are white (Sanders, Warren, Biden, Buttigieg, Klobuchar, and Steyer).

White supremacy is not just a Fox News problem, folks.

This evidences how leftists have somehow managed to cultivate a curious mindset that’s a cross between juvenile puerility and geriatric senility, neither seeking perspective nor, apparently, remembering the past. Correct me if I’m wrong, but I do seem to recall the Democrats nominating some guy named Barack — a fellow billed as black who expressed in a book that whites were “alien” to him — in 2008. Has the entire Democrat electorate channeled Bull Connor since then?

But forget Obama (I’d sure like to). Note that Harris herself seemed poised to replicate his feat, being hailed as the “new frontrunner” by CNN just over a year ago and “surging” to second place in a July primary poll, just two points behind leader Jumbling Joe Biden. Did the Democrat electorate only discover post-summer that Harris is a Woman of Color™?

In reality, Harris’ complete lack of charm and likeability and her phoniness and hypocrisy sank her. Leftists themselves sometimes registered intense antipathy toward her, in fact, with Medium’s Moon Bat speaking for many earlier this year in calling her history “sociopathic.”

Note also that ex-San Francisco mayor Willie Brown — the man Harris is accused of using to sleep her way to the middle — said this summer that, along with the other Democrat candidates, she’s not “ready for prime time.”

Yet the race-baiting flows unabated. As the Daily Caller reports, “‘It’s really f[*****] up that straight white male billionaires (plural) are going to qualify for the next debate while Kamala Harris is leaving the race. Like, immensely,’ wrote Adam Peck, a staffer at the left-wing Center for American Progress.” (What eloquence from their hires!)

This was echoed by Laura Bassett, a journalist who writes about “gender” (a grammarian, I suppose) and tweeted:

“‘Kamala may not have been my number one candidate, but she belongs in the race,’ added Imani Gandy, an analyst at left-wing outlet Rewire News,” the Caller also relates. ‘“Now we’ve got rich white dudes papering the airwaves with their b[******]t,’ Gandy wrote, adding: ‘I’m not voting for Biden or Buttigieg’” (or for civility, apparently).

Of course, if Gandy, whose Twitter handle is AngryBlackLady, is upset about the Kamala/Corey collapse, she ought to talk to fellow blacks. A large plurality of them is supporting Biden.

That said, and regarding the Bolshevik Billionaires, it is lamentable that basically unqualified candidates can “buy” support and steal the limelight from other unqualified candidates. But having numerous Daddy Warbucks Democrat politicians is not surprising. Corporate America is now a left-wing domain, and the wealthy have long been voting Democrat. (Could this be why leftist policies serve to destroy the middle class, the only GOP-leaning economic stratum?)

The Caller cites two other leftists who also kvetched about white candidate privilege, but it all reflects the same thing: delusion.

Perhaps these liberals would grant non-white candidates affirmative action. But the reality is that the Democrat Party established rules for debate qualification, and a requirement is that you must actually, if you can believe it, appeal to the electorate.

Consider that, as with Harris, Senator Corey Booker (D-N.J.) undid himself. As the left-wing Atlantic recently explained, by “backing away from his own record,” the “promising New Jersey centrist took himself out of contention” (that is, “centrist” by Haight-Ashbury standards). Booker bolted left and got left out. In contrast, Buttigieg, for all his faults — giving the nod to America’s destruction among them — was smart enough to eventually figure out the benefit of faking relative moderation.

As for the ruling class’s racial composition, it’s largely white for, in part, the same reason NYC’s stop-and-frisk subjects were largely black and Hispanic: demographics.

In fact, contrary to the leftist “white supremacy” blather, the truth is that being white — and in particular a white man — has for a long time been a political liability. Just consider a 2008 Gallup study of the general electorate. It found that while six percent of voters said they were less likely to vote for Obama because of his race, nine percent said that factor made them more likely to vote for him.

Then, the left-wing (mainstream) media were trumpeting this very January how the new Congress was “the most diverse in history.” And the Washington Post finally woke up last year and reported that, hell’s bells, the “worst thing to be in many Democratic primaries” is in fact a “white male candidate.”

Yet now that the Left hasn’t gotten its identity-politics immediate gratification, this Caucaphobia manifests again. After all, how could anyone — considering the aforementioned facts — claim that cold-as-ice Kamala and craven Corey are yesterday’s story because of white racism?

Prejudice, that “unfavorable opinion or feeling formed beforehand or without knowledge, thought, or reason,” is the answer. “That’s just the way whites are,” goes the non-thinking rhetoric. “They can’t rise above their bigotry.”

Yes, leftists level their accusation only because of their targets’ skin color. It’s racist and disgusting — and pure projection.