The Two Party System Is Broken 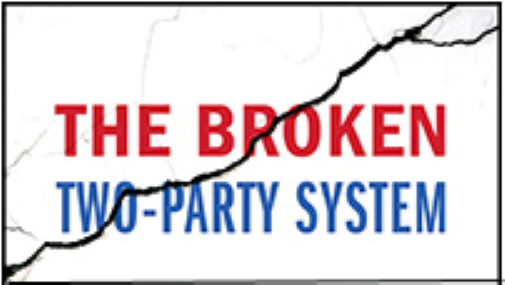 The Two Party System Is Broken

The two party system is broken. Partisanship and disagreement rule the chambers in legislative meetings around the country. One side must always be the loser, hardly a compromise to be seen and the sacrifice always paid by the smallest minority, the individual. The individual that disagrees with a law being passed, a tax being assessed or a bureaucracy placed over their lives. The individual that is being ruled by whatever political party has the power that day, year or decade. Year in and year out, we pass the gavel back and forth like a damn football to decide who gets to be the loser. This is the system we have allowed to be corrupted by career politicians, backroom deals and blind partisan voting. Instead of asking them to fix it, we must do it ourselves.

Our founding fathers spoke wisdom in the face of tyrants in 1776, writing in the Declaration of Independence, “We hold these truths self-evident that all men are created equal, that they are endowed by their Creator with certain unalienable rights that among these are life, liberty and the pursuit of happiness. That to secure these rights, governments are instituted among men, deriving their just powers from the consent of the governed.” guiding us imperfectly into the future of American freedom. They acknowledged and debated the imperfect parts of freedom and government for over a 116 days before the constitution was first presented, and even then it took 10 more months to be ratified. In 1780 John Adams said “There is nothing which I dread so much as a division of the republic into two great parties, each arranged under its leader, and concerting measures in opposition to each other. This, in my humble apprehension, is to be dreaded as the greatest political evil under our Constitution.” begging the question, what does that mean to you?

Our country was founded with the ideals that diversity of thought, beliefs and morals would be accepted and that government should never infringe on one person’s happiness.  Now, we pass laws daily that people speak out against as harmful to their happiness, or worse they pass them in the dead of night without public input or comment at all. In article one section one of the Washington State Constitution it says “All political power is inherent in the people, and governments derive their just powers from the consent of the governed, and are established to protect and maintain individual rights.” further driving home the immensely important principle of consent from the individual.

Consent is key in all areas of life; to work a job or offer a job, consent to buying a house or lending money for one or even consent in personal relationships, physical or otherwise. Our government is supposed to defend our right to consent as we pursue our happiness not remove our rights without our consent stealing our liberty. Our founders knew as they debated our governmental structure that people would have plenty of different ideas on how things should be or what ideals mattered most and that to coexist government must protect us by allowing us to be who we are, without forcing others to be who WE want them to be or punishing them for being different.

We teach our children to be kind, to accept each other for who we are and to love one another. Each November though we vote for our team without any care for how the other team fairs afterwards. Claiming, “it’s democracy” and allowing 51% of the people to impose their will on the other 49% doing the exact opposite of what we teach our children. Children are pure, right until we let the world corrupt them by corrupting it slowly ourselves overtime.  We need to get back to the basics, accepting our differences so that we can live and let live.

The two party system has failed us, stealing our democracy via gerrymandering voting districts, creating biased and pre-ordained outcomes in elections. It has been corrupted by ballot access laws that make it extremely costly and prohibitive to be in an election unless you play with one of the existing two teams.  Even the presidential debates have been bastardized by the Commission of Presidential Debates, a partisan controlled and corporate sponsored debate for only the two parties in control, stolen by them from the League Of Women voters in 1987 and prohibiting 3rd party candidates for over two decades since. Given a chance to sponsor the new debates in 1988 the League of Women voters declined, citing to many rules and restrictions. The President of the League stated the League had “no intention of becoming an accessory to the hoodwinking of the American public.” sending a message to America that they would stand for open debates for all.

We the people are in charge of our government, not the other way around. In 1854 Abraham Lincoln said, “No man is good enough to govern another man without that other’s consent.” again echoing the sentiment of individual consent.  These principles, the acknowledgment that my life must not be the same as someone else’s, or theirs mine, and that idea that I, and we, should be okay with that are why I identify as a Libertarian as opposed to the establishments two parties that have aided and abetted the destruction of civil liberties, due process and the right to live our lives as we see fit so long as we are not actively harming one another.  The two party system has thrived on our discontent, trading political favors like baseball trading cards and using our lives as the currency.

While the two party system has proven itself flawed and often corrupt I am proud to be a Libertarian, imperfect and fallible myself, but with an eye for everyone’s rights, not just a certain group of people I get along with. Libertarians have a passion for truth and fairness in governance, not self-serving platitudes and rhetoric to get elected. We believe that you deserve all of your rights all of the time and that only through freedom can peace and prosperity be fully realized. That consent not coercion is key for a civil society, and that ultimately you get to run your life as you see fit so long as you do no harm to others. Libertarianism is the counterbalance to the failed two party experiment that can ultimately bring us back into harmony, allowing everyone to pursue their own version of happiness.