Liberty State Being a “Secessionist Banner” Could NOT Be Further From the Truth! 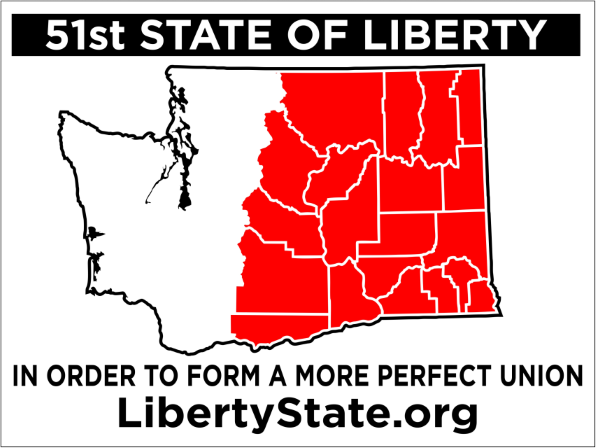 Liberty State Being a “Secessionist Banner” Could NOT Be Further From the Truth!

“…the separation would be a windfall for the west side – they would be able to spend their taxes collected as they desire on their cherished projects and not have to waste their resources on propping us up here on the Eastside.”

First of all, the Liberty State movement is in no way operating under a “Secessionist Banner.” Nothing could be further from the truth. Liberty State will be created from the twenty counties east of the Cascade Crest in accordance with the provision of Article 4. Section 3 of the US Constitution, which has been used five times in US history to create new states out of the territory of previously existing Commonwealths or States. Maine, New Hampshire, Vermont, Tennessee, and last of all West Virginia were created using this Constitutional process. Liberty State is to be a new state in the American Republic. This endeavor is in response to the fact that our rights and opinions have historically been ignored and disregarded by the governmental power structure in Olympia.

Key in this grievance is the fact of the larger population in the Puget Sound Region overriding the votes of the counties of Eastern Washington, as well as the votes of the majority of the counties in the Southwestern portion of the state during elections. We in Eastern Washington wish to have the ability to control our own destiny, and not have imposed upon us those laws we are at variance with. There are regulatory and bureaucratic assaults on our property, water, and individual rights, especially the infringement of our 2nd Amendment, and other rights enshrined in the Bill of Rights.

Thus, we desire to establish a new state based on Constitutional principles and the Rule of Law. It has been suggested that if we wish to be out from under the thumb, or un-restrained by the shackles of Olympia, that the simple solution is to move across the river to Idaho. The suggestion is an offense to me, as I believe all citizens have the natural right to live where we desire in peace. I am the Asotin County Liberty State Co-Captain, and I will continue to work for the restoration of local, responsive, and responsible government in the new State of Liberty.

Some skeptics have misconceptions regarding the financial capability and viability of the State of Liberty. The cherry picking of figures regarding taxes and expenditures in the various counties do have some application in the present political and economic configuration. But one that I disagree with is regarding Whitman County. The fact is the greater portion of state expenditures in Whitman County occur because of the presence of Washington State University, which is utilized by students from all across the state, as well as other non-residents. The statements about the financial feasibility of Liberty State are based on perceptions of the current state of our economy under a restrictive regulatory and bureaucratic structure in the current State of Washington that discourages small business and innovation. In Liberty State there will be a much reduced government presence in people’s lives, therefore fewer restrictions in the pursuit of both personal and fiscal success. We are not endeavoring to be Idaho, or any other state, but rather the new free independent State of Liberty, where citizens can once again experience the blessings of Freedom and Liberty.

Some critics use the term “Secession,” and that the separation would be a windfall for the west side – they would be able to spend their taxes collected as they desire on their cherished projects and not have to waste their resource on propping us up here on the Eastside. In the same vein the State of Liberty will attract investors and out of state businesses who will see a state based on the rational fiscal principles of capitalism, and the idea that the individual should reap and enjoy the fruits of his or her labor, and not the constraints of an overbearing government.

Some people referred to Liberty State supporters as: “Secessionists”, “Christian Dominionists,” and finally as the “Christian Taliban.” As a Liberty State supporter, Veteran, and voter I take umbrage at this mischaracterization of the grassroots effort by Liberty State advocates who are pursuing a valid constitutional effort to reinstate Constitutional Government based on the principles of: representation, individual rights, a rational financial system, and freedom of expression and belief for the citizens of present day Eastern Washington.

We welcome anyone regardless of their affiliation, denomination, faith group, of lack thereof. Our intent is to create a free, independent, and responsive state government, based on the values and rights expounded in the Constitution and the Bill of Rights as previously stated. We encourage ALL regardless of political, religious, or any other persuasion to seek the truth of our positions, and determine if they wish be part of a truly free state that stands by the statement of Thomas Jefferson in the First Draft of the Declaration of Independence that “All men are created Equal and Independent.” Independent was edited out by Benjamin Franklin and John Adams as they believed it redundant. I invite those interested in a return to limited Constitutional government, to join us in the endeavor to reinstate Freedom and Liberty, unconstrained by unnecessary regulations, taxes and the bureaucracy in the State Capitol.

The principle aim of those of us who are advocating Liberty State is to restore limited and locally responsible government Of, By and For the People of Eastern Washington. We are inclusive – not exclusive, as many of our detractors infer in their incorrect perception of our efforts to once again be free citizens. Liberty State will be using the provision enumerated in Article 4, Section 3 of the US Constitution allowing citizens to form new states.

The resources and population in the twenty counties east of the Cascade Crest is equivalent to the entire State of Idaho in terms of population and Gross Domestic Product, which makes it not only realistic, but also feasible for us to pursue statehood, and therefore returning to and securing our own destiny-culturally and politically. The economic prosperity, opportunities for Freedom, and expression of our individual rights that will be available in the State of Liberty is reason enough alone for Liberty State supporters to seek those benefits for future generations.