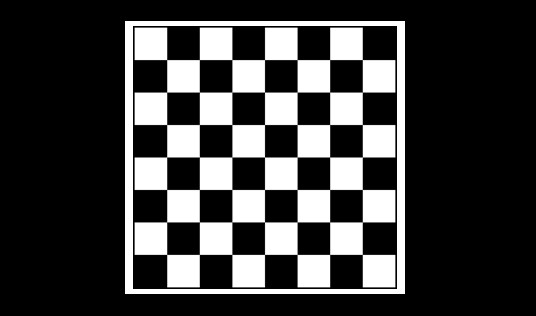 In 1983 in Bangkok Thailand, Labor Party Leader and Prime Minister Robert Hawke of Australia initiated the beginning of a series of meetings of “western Pacific economies to define and pursue shared interests” in pursuing the Uruguay Round of trade negotiations.

Pacific Region for the Global Community

Pacific Economic Cooperation began as a global strategic initiative in 1980 with Japan and Australia being the initiators.

It became a trilateral organization for trilateral discussions when the United States agreed to participate.

In 1984, the US joined when  Pacific Economic Cooperation Council (PECC) was inaugurated by President Ronald Reagan.  That action set in motion a conspiracy so large that nobody would have imagined it possible.  It’s only with the documentation of history that it becomes undeniable.  A copy of the PECC Charter was retrieved from the archive.

Meetings were held in Vancouver in 1986 and San Francisco in 1992.  The output from the 1992 meeting was the San Francisco Declaration for Open Regionalism (pdf).   In 1994, the meeting in Kuala Lampur laid out the agenda in a concord reaffirming the objective of open regionalism. The dropbox below has significant excerpts from the concord: 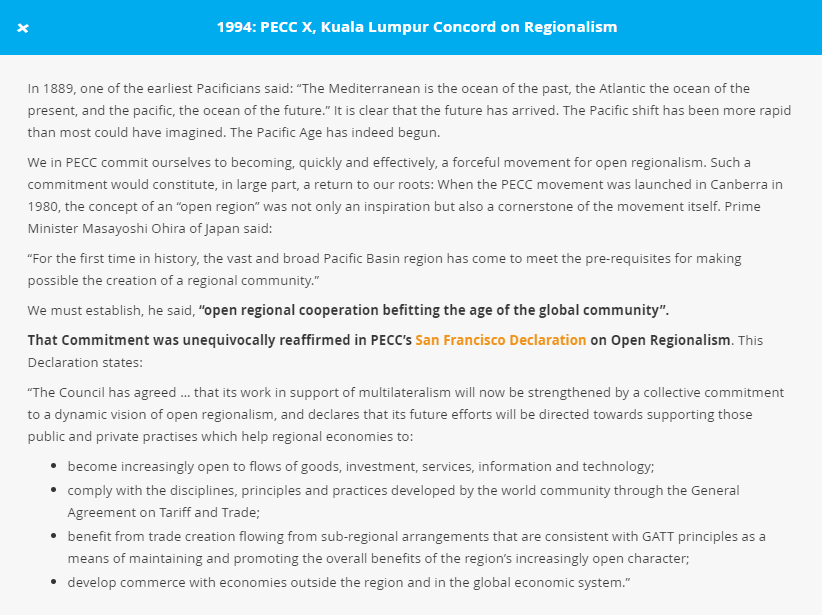 OUT     Common Markets IN

The “Atlantic Community” began with the establishment of the Organization for European Economic Cooperation (OEEC – Marshall Plan)  and the signing of the North Atlantic Charter in 1949 (NATO).  Successive agreements that began in 1950 with Coal and Steel Agreement produced the European Common Market and ended with the creation of the European Union with the signing of the Maastricht Treaty in 1992.  The Maastricht Treaty created a political union ruled by an unelected governing body under the acquis communautaire – community (communitarian) law.     In the whirlwind of the time, the Berlin Wall coming down in 1989; East and West Germany reunited in 1990 and 1991 the breaking apart of the Soviet Union into the Commonwealth of Independent States – just a change in semantics it would seem.

In 1989, Australian Prime Minister Hawke made the next move towards a Pacific Common Market.  He suggested the establishment of a (trade) ministerial meeting.  The meeting was held in Canberra, Australia and included “12 Asia-Pacific economies” to establish an intergovernmental group for Asia Pacific Economic Cooperation (APEC). 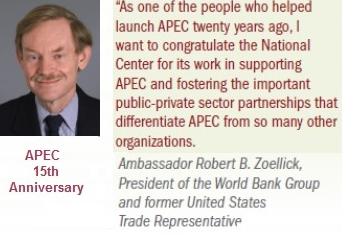 President George H.W. Bush sent Robert Zoellick to Canberra to represent the United States.  Zoellick must have been involved from the beginning at Bangkok based on the discrepancy in Zoellick’s statement documented in the 15th Anniversary report of APEC.

In 1990, the G7 – leaders of the western countries turned the tables to begin working to create a union under communitarian law in North America.  It began with a summit of the G7 countries held in Houston, Texas in 1990 and George H.W. Bush’s Enterprise of the Americas Initiative.  Bush also announced a paradigm change in transportation with the announcement of a “new transportation system” for the United States.

What “new paradigm” meant in terms of the transportation system was that our interstate highways were redefined to be international shipping lanes fully automated with designated intermodal commerce zones that become international ports – inland and seaports. 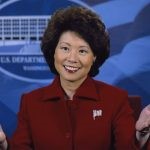 Elaine Chao, was born in Taiwan.  She is the daughter of Chinese immigrants.  In 1961, James Chao’s father was a ship’s captain who – according to a biography posted on the Foremost Foundation website was sent to the U.S. for further studies beyond his Master Mariner degree.  In 1964, Chao started the Foremost Maritime Corporation.

1986 – Was appointed to be the Deputy Administrator of the Maritime Administration of the U.S. DOT

1988 – Chairwoman of the Federal Maritime Commission

1989 – Appointed by George H.W. Bush to be the Deputy Secretary of the U.S. Department of Transportation

1990 – Chairman Chao was present at the announcement of the New Transportation System for the U.S.  as can be seen in the videos captured by C-Span at the time. 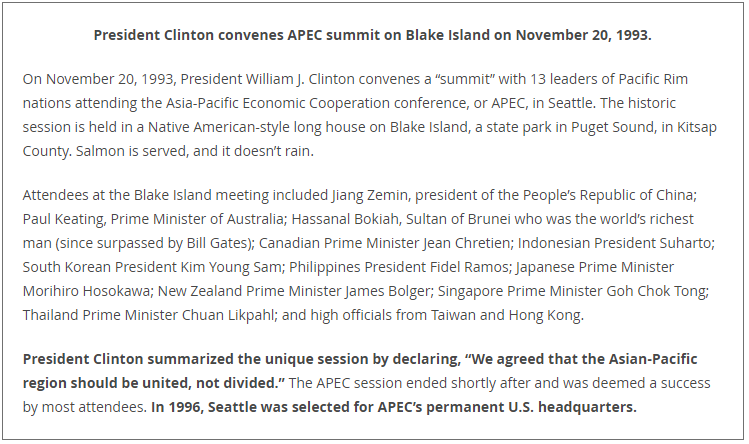 APEC is an intergovernmental organization with a fascist component – partnership between government and business.

From the Initiatives in the Declaration:

Pacific Business Forum – establish a forum comprised of two private sector representatives (including one representing small and medium business) from each APEC member to identify issues APEC should address to facilitate trade and investment in the region. The forum should present its report in 1994.

Don’t you suppose that the business “partners” would have their own economic interests in mind?

Without going any farther and just looking at a map, we can see the strategy for splitting up the United States.  The re-organization into “common markets” comes with global governance, fascist management of the economy and a weaponized, militarized system of transportation.  (Note:  the artwork is not so great but it doesn’t matter because the purpose is to allow you to visualize what’s being done to our country.) 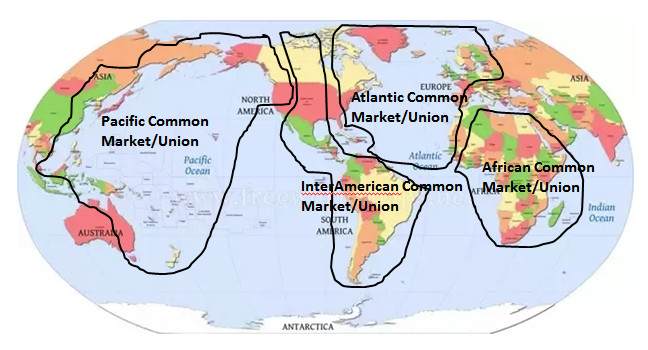 U.S. trade policy since 1974 has been about gutting our economy – exporting it to the third world countries – redistribution of wealth by redistribution of production. It gave jobs to people in the third world countries while giving Americans empty promises of a brighter future. The farce behind free trade was that while our livelihoods were being exported, agreements were being negotiated to create an international body of commercial law – communitarian law for a common market. A common market is regionalization of economic activity with neighboring countries under communitarian law – community law.

Environmentalism was used as a tool to crush domestic economic activity either to halt production in this country as in the case of the timber industry or to cause prices to rise high enough to make imports more economically feasible thereby establishing market conditions for the products of the exported production. It’s not a coincidence that an international body of environmental law was created following the same timeline as the destruction of our economy and that environmental law does not apply to third world countries – only to countries whose economies are being gutted.

If we don’t get out of this trade trap, this country is finished.