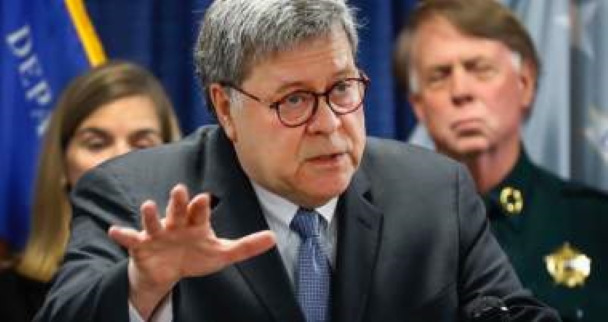 U.S. Attorney General William Barr was in Memphis on Wednesday to announce the launch of a new federal gun control program, Project Guardian. The AG promises to enforce federal gun regulations “with a vengeance.”

As President Trump is facing mostly manufactured charges of committing impeachable offenses, his attorney general is committing actual offenses against the Constitution, namely infringing on the right of the people to keep and bear arms, as protected by the Second Amendment to the U.S. Constitution.

“I have long believed that the first duty of government is to protect the safety of our citizens,” Barr told the press gathered to cover the kick-off of the gun buying crackdown.

Actually, Mr. Barr, the federal government was NOT given the power by the states to protect the citizens of those states.

The scope of federal authority was very succinctly explained by James Madison in Federalist 45:

The powers delegated by the proposed Constitution to the federal government are few and defined. Those which are to remain in the State governments are numerous and indefinite. The former will be exercised principally on external objects, as war, peace, negotiation, and foreign commerce.

Notice that among the “few” powers granted by the states to its agent, the federal government, you will not find the power to disarm civilians.

In fact, the Second Amendment to the Constitution explicitly forbids the federal government from trespassing on the right of the people to keep and bear arms.

Consider this: If the federal government is going to prosecute “with a vengeance” its plan to prevent the purchase of firearms by those it considers unsafe, is that not tacit admission that the government fears an armed populace?

When one takes into account that many of those being denied the right to purchase firearms and ammunition are veterans, it makes sense that a tyrannical federal government would want to take the weapons out of the hands of those who have experience wielding them in battle, no?

Attorney General Barr is undaunted, though, in his zealous pursuit of a country where certain civilians must obtain permission of the federal government to own weapons.

Referring to a gun control measure he oversaw in the early 1990s, Barr described Project Guardian as an expansion of that early effort — Project Triggerlock.

Barr rehearsed the successes of the previous program and then promised that this new federal firearm restriction would “revamp this program, resuscitate it, and double down on it nationwide.”

That’s right: The attorney general of the United States is promising to “double down” on the federal government’s infringement on the right to keep and bear arms.

Could there be a clearer admission of the administration’s intent to deny the natural, God-given right of self-protection to Americans, based solely on the federal government’s evaluation of their worthiness?

Would any one of the men who voted to ratify the federal Constitution have done so had they known that the government being created by that document would someday usurp the power to decide who could and could not purchase weapons?

Therefore, any attempt to curtail the right of civilians to own and use weapons — of any sort — is an act of tyranny, no matter how “reasonable” the attorney general tries to make it sound.

Besides, reasonable people understand that the ready availability of guns is no more responsible for any armed massacre than an all-you-can-eat buffet is responsible for obesity.

Barr believes that Project Guardian will be successful based on the “success” of the federal government’s “initiatives focused on drug organizations, gangs, and gun offenders.”

Everybody knows that the federal government’s “War on Drugs” has not ended drug abuse and drug-related crime. And gangs? Just as much of a problem, if not more, than they’ve always been.

Finally, regardless of the federal government’s message to “dangerous” people who try to buy guns — “We’re coming to get you” — there is no way that the imperial forces could accomplish such an ambitious enterprise without help.

The federal agencies tasked with taking away the right of the citizens of the states to purchase firearms and ammunition must have help; the help of the state governments.

In the case of executing the exclusions of Project Guardian, AG Barr says that “It will involve all federal law enforcement agencies working closely with our state and local colleagues.”

In 2014, Judge Andrew Napolitano discussed this pernicious partnership and how to prevent its formation.

“The federal government does not have the person power and resources to enforce all federal laws on its own,” he said. “It needs the assistance of state and local police as well. They don’t have that in Washington and Colorado because marijuana is lawful there, so it might be impractical and be too costly for the feds to enforce there.”

“Our home state of New Jersey could not, for example, use the police to frustrate federal law enforcement. What it could say to state and local police [is] ‘you will not cooperate.’ That will make federal enforcement of tighter federal gun laws nearly impossible,” Napolitano added.

“If the federal government limits guns in a state, will it need the assistance of state police to enforce those limitations?” the judge asked rhetorically. “Yes, they will. And do the states have the right to refuse to enforce federal law that’s against state public policy? Yes, they do. That’s where we are on this.”

Project Guardian is underway. It appears that this latest federal encroachment into the natural liberties of the people is in pursuit of the promise AG Barr made to “disrupt individuals who are mobilizing toward violence.”

One wonders: Will that same standard — “mobilizing toward violence” — for gun banning be applied to the federal government?