Update on the Chile crisis. It’s getting personal! 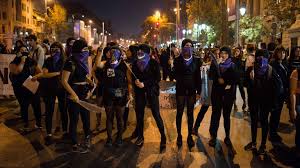 Update on the Chile crisis. It’s getting personal!

By Leah of Santiago

Another interesting day in Santiago de Chile! I heard yesterday that the call for protest this time was going to me in my hood. It was to begin at 5 PM. Remember I have been saying that the rich need to suffer as much as all of they have.

I had a couple of morning classes, then a meeting with a new company for their business. I believe it went very well, despite having arrived almost 30 minutes late, even though I left with plenty of time to spare. My Uber driver took me through the previous “war zone” where I used to live. Most of the traffic signals have been destroyed causing major chaos with the traffic.

I had to leave my meeting quickly to arrive on time for a scheduled MRI. Another Uber driver took me way out of the way to avoid the problem areas. By then I had heard that the protests were on the way to my area, 3 hours earlier than I expected, through the area where I needed to go for my MRI. As I was approaching the medical center one group of protesters were walking past the clinic. I made the technicians promise me that if there was trouble and we needed to escape they wouldn’t forget me and leave me in the tube. By the time I left, around 2:30, everything had changed. Stores were closed and were in the process of being boarding up, panic was in the air. Then I needed to figure out how to get home. I knew the dog was home alone, so that was the only place I wanted to be. I needed to go straight through the protest to get home. Obviously not a good idea! There were police everywhere, ready in their riot gear. I was starting to move in the direction of my house and was faced with tear gas and the police haters confronting them. Find a better route! I had to walk a long way out of my way to avoid the area as I was faced with the mobs coming my way. At this point, still peacefully. Before making it home the first fires had been stoked. It was pandemonium! I don’t know that I have ever been more stressed in my life. I made it home but was trying to figure out what to do, stay or go. I felt with all the trouble it was best to stay at home but watch carefully what was happening around me on three sides from my terrace on the 15th floor. My backpack was stocked to leave if I needed to. It was driving me crazy that because I live in between all the other tall apartment building, I couldn’t see what was happening around me. I could see smoke and hear shots being fired, helicopters flying around in circles. I couldn’t stay home, I needed to know.

I knew they were assembling around the largest mall in Santiago, 2 blocks from me. The goal, to watch the 70-story tower burn and to loot the mall. I walked to the corner where they were assembling and got so angry how they were in the faces of the police, taunting and cussing at them. This is what they call peaceful protests! I couldn’t help myself from picking out the biggest loudmouth and engaging with him. I knew they were aggressive but also that the police were on the other side of the street, in case they decided to hurt me. I did my best to question how burning and looting their own city was going to help their cause. In the end, they were able to justify their actions as this was a revolution. I wished them luck and walked away having most of them screaming and cussing at me. All they did was empower me. I was smoking mad and you don’t take on a smoking mad mama!  I was going to defend my neighborhood even if I was alone in it.  I was successful in negotiating with one of them to give me a 2 x 4 that I ‘m sure he was planning on using to smash windows or policemen’s heads with. I was able to chase a gang of about 8 that were spray painting a brand-new office building with. I stopped an untold number of protesters entering the area, begging them to protest without violence. I distracted a group of about 60 from engaging with the police for about 15 minutes until finally tear gas was shot into the area.  My local pub around the corner was turning into a medical emergency center to treat all these “peaceful protesters”. I knew they wouldn’t attack that. After about 3 hours things quieted down and I could take the dog out for a walk.  I think it stopped because their loot bags were full and they couldn’t fight and carry their loot at the same time.

All this was just in my neighborhood. The real battle was only 2-3 blocks away. I still can’t open my windows for the smoke and tear gas. I dread to see the damage tomorrow. Most of it happened on the other side of the mall, in the neighborhood of, Providencia. More destruction of small stores and looting. I will know more tomorrow.

Who are these committing the violence? Average age 20 years old, obviously not working, “fighting for the last 30 years of oppression” that they have suffered. All the fault of Pinochet. They will win this battle at any cost.

Why is this happening? What has them so angry?

Obviously, the destruction is happening from a small and mighty group of very misguided young people who are having the time of their lives playing cops and robbers all while justifying their behavior as the heroes of Chile fighting the serious oppression they are suffering under. They will be the heroes who will destroy the evil Neo-Liberalism!

Group number two, is the other large group of disenfranchised people, and there are many. I don’t want to give a number because I really don’t know. Everyone in Chile knows that they are being taken advantage of in many ways.

Let me explain the biggest issues.

On top of these issues, you can count on someone stealing from you, be it your phone or breaking into your car or home, probably once a year of more.

I really do understand the anger when you feel like everyone around you is trying to take advantage of you someway.  I have experienced this feeling more times than I can tell you.

My conclusion after these weeks of deep thought, seeking the answers to what is happening here, is that Latin culture has a deep and painful flaw. When I have shared this with people is shuts their arguments down immediately and they get very quiet as they think about it.

It is not for the failure of the systems, economic and political, that they are suffering. It is from their own societal flaw. Latin culture is one of “take before someone else takes from me” It is a win/lose society. Everyone wants to win and that means the other must lose. This is visible in all economic classes.

I’m convinced this is why they can never quite achieve the first world status even though Capitalism has brought them so very far.

I have a perfect, very personal example that will demonstrate how life works here on a daily basis. The apartment above me had a flood about 9 months ago. It destroyed my ceiling and it needed repairs and repainting and they should have also replaced my laminate floors. I tried to negotiate this to be done because everyone was being quite reasonable. Until the time of the work and money came up. In the end I was finally negotiating with the owner for him to instead of hiring a painter to come and do the work, I would repaint, if he would pay for a higher quality of paint, instead of the un-washable latex he had on the walls. This would benefit him to receive the apartment back in better condition that he gave it to me. He said “No”, because in my contract is says that I must repaint before I leave, and he is going to make sure I have to do this. He then accused me, because I was American, that I was looking for a win/win and that is not the way it works here in Chile!

Example number two, was from just today. Yesterday the building manager called me putting me in a panic that there was water in the apartment below coming from my apartment, causing my son to rush home early from work. For the past 3-4 years, I have shown the owner that there was water damage outside one of our bathrooms and that clearly the shower pan was leaking. He blamed the building manager and nothing was done. I brought both of them back during the winter and they both blamed us for showering with the window open and the condensation was dripping. So, the solution was to close the window. I wasn’t buying any of this but was tired of talking to idiots.  So today they finally broke open the wall and …… the shower pan had been leaking and now there was damage below! Typical here is for no one to take responsibility until there is a crisis and keep blaming everyone else.

My other observation and serious disappointment… I was one of the very few attempting to stop this nonsense, everyone else, hid in their apartments or got as far away as possible. I guess it’s only the responsibility of the police to get things under control and after all, it’s not their fault and not their job.

My assessment as of now… an immoral society can’t be free and has a need for greater masters! I know, this is not my quote, but I sure have seen the evidence.

The free market demands a win-win society and a social conscience. It will be lost as society loses its goodness and more and more people take advantage of each other and faith in institutions are lost, people will seek to blame and take out their anger in revenge to seek justice!

Wish me good luck and say a prayer for me tonight. I do have my limits, but I haven’t reached it yet. Perhaps very naively, I still hope I can make a difference and I think you all know, I’m not a quitter.