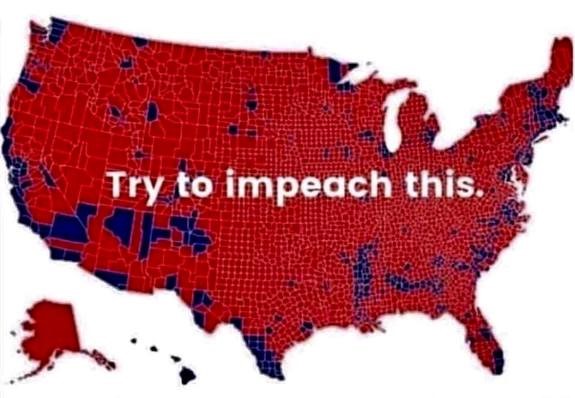 Democrats would like the American people to believe that their secret closed-door anti-constitutional questioning of so-called witnesses in their investigation of President Trump have revealed some dark sinister impeachable actions by the President.

However, when one reads the transcripts of the depositions what is revealed is almost the exact opposite of what the Democrats claim. Contrary to what House Democrats and the fake news may claim, the testimonies released Tuesday further undermine the Democrats’ impeachment narrative.

While the establishment media and Democrats claim that Ambassador Sondland’s testimony “confirms” a quid pro quo, it does nothing of the sort. It’s largely based on conjecture.

Sondland said: “… I did not know (and still do not know) when, why or by whom the aid was suspended.”

Sondland said: “… in the absence of any credible explanation for the suspension of aid, I presumed that the aid suspension had become linked to the proposed anti-corruption statement.”

Sondland said: “I now recall speaking individually with Mr. Yermak, where I said the resumption of U.S. would likely not occur until Ukraine provided the public anti-corruption statement …”

Sondland also testified the President told him directly that he was not interested in a quid pro quo.  According to Sondland’s testimony, President Trump stated: “I want no quid pro quo.”

But just as the transcript of Sondland’s testimony was about to be released he changed his story.

According to reporting by CNN, Sondland sent the House Intelligence committee a three-page addition to his testimony on Monday, saying he had remembered a September 1 conversation that occurred on the sidelines of a meeting between Vice President Mike Pence and Ukrainian President Volodymyr Zelensky, in which he told a top aide to Zelensky that the security aid and investigations were linked.

“I now recall speaking individually with Mr. (Andriy) Yermak, where I said resumption of U.S. aid would likely not occur until Ukraine provided the public anti-corruption statement that we had been discussing for many weeks,” Sondland said.

However, also according to CNN, former U.S. Ambassador to NATO Kurt Volker told lawmakers that he didn’t know about any “quid pro quo” linking US military assistance to the announcement of Ukrainian investigations into Biden and the Democrats.

“You asked what conversations did I have about that quid pro quo, et cetera,” Volker said according to CNN’s reporting. “None, because I didn’t know that there was a quid pro quo.”

He testified that after learning about the holdup of US military aid, Volker worked to get the assistance resumed, and that he never believed it was linked to Trump’s desire for a probe of the Bidens.

Volker also said that the Ukrainians didn’t know about the holdup of military assistance until after the Trump administration stopped pressing them to announce an investigation into the Bidens. This testimony bolsters a key tenet of Trump’s defense — that there was no “quid pro quo” with Ukraine because the new government in Kiev was not aware that military aid was being withheld.

“To my knowledge, the news about a hold on security assistance did not get into Ukrainian Government circles, as indicated to me by the current foreign minister, then diplomatic adviser, until the end of August,” Volker said according to the CNN report.

In other words, at no time did Donald Trump tell either of these key diplomats to set in motion a quid pro quo between military aid and an investigation of the Bidens.

We think White House Press Secretary Stephanie Grisham nailed in a statement released after the Democrats released the latest tranche of transcripts, “Both transcripts released today [Tuesday] show there is even less evidence for this illegitimate impeachment sham than previously thought. Ambassador Sondland squarely states that he “did not know, (and still does not know) when, why or by whom the aid was suspended.”  He also said he “presumed” there was a link to the aid—but cannot identify any solid source for that assumption.  By contrast, Volker’s testimony confirms there could not have been a quid pro quo because the Ukrainians did not know about the military aid hold at the time.  No amount of salacious media-biased headlines, which are clearly designed to influence the narrative, change the fact that the President has done nothing wrong.”