Between 1990 and September 11, 2001, the Berlin Wall came down, East and West Germany were reunited, the Soviet Union collapsed and the former states reorganized into the Commonwealth of Independent States.  In the United States, a media campaign of terror concerning the Year 2000 was waged against the American people concerning all of the potential disasters that could befall us at the second of the year 2000 date rollover.  We had the 1993 terrorist bombing of the World Trade Center. The bombing of the Murrah Building in Oklahoma City.  The terrorist bomb at the Centennial Olympic Park in Atlanta.  There was the media circus of Wall Street while they engaged in stock trading fraud during the dot.com (post) boom followed by the bust when the show ended.  The “irrational exuberance” was probably due to the U.S. Senate agreeing to create the World Trade Organization in 1995 opening up our country to be looted while they were dreaming of selling technology and software into a global market.  It was a decade of chaos, terror, terror, terror and grand theft country.

Different Visions of the World

It’s safe to say that the international finance and banking community (IFBC) have a very different view of the world than people who live and work on the ground.  The IFBC’s vision was that nation-state borders were a hindrance to business so when the Berlin Wall came down leading to the collapse of the Soviet Union and the establishment of the independent states, from their point of view, it was time  to reorganize the political structures of the world – ending the nation-state system.  The replacement for the nation-state is the “market-state”.

The market-state is simply a euphemism for a territory with commercial regions managed by regional soviets comprised of corporations and universities with nominal participation by legacy government representatives that serve more as a facade to give the illusion of legitimacy and to be front-men for the agenda.

The commercial regions are city-states – population centers that become the political centers of power for administration of the region.  They call it market-based governance but it really is just plain old fascism – corporatism for the wealthy and communism for the poor.   There have been many books written about the ideas of market-based governance but to this writer’s knowledge, none of them have been written in the context that they should have been written.  The book below in particular fits with the discussion here because the authors were both from Harvard University.  The JFK School of Government was central to the strategic planning for the demise of our nation-state.  They used the prestige of the university and their privileged position in the society to sell the ideas of sedition and treason in highfalutin academic language.

With the understanding that the strategic objective of globalization was the end of nation-states with the new centers of power being the major cities of the world, it’s then possible to begin to understand the conversion maneuvers to usurp the power of elected, representative government.

Colleges & Universities as Community Builders and Managers; In-filling for population (tax base) shortages in rural communities to build “the market” for the regional economy, exporting inner city dwellers to the suburbs to be able to more fully exploit valuable inner city property to increase the city tax base.  [Because of the connection to George Soros via the Metropolis Project connected with refugee resettlement, the possibility must be considered that the inner city populations being re-located to rural areas along with massive numbers of so-called refugees that aren’t really refugees, may actually be covert occupation forces because the conversion of our system of government is by definition – treason.]

In 1998, the Brookings Institute sponsored an event titled The State of Cities. One of the participants, Camille Barnett spoke very frankly about the conversion to the new system of political organization around the concept of sustainable city-states: 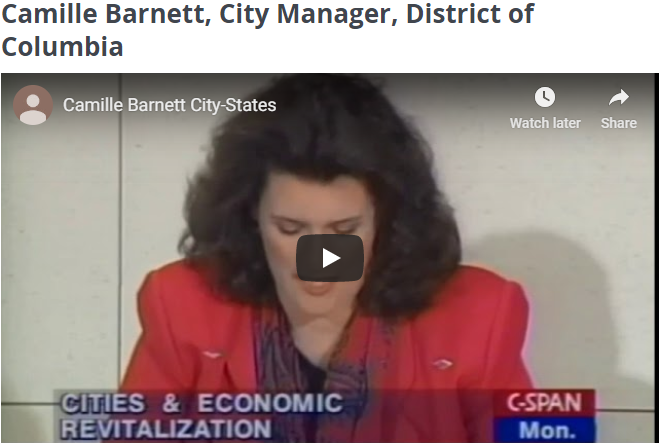 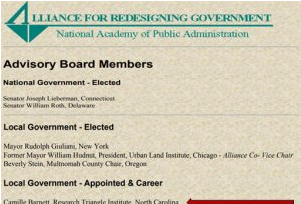 You might be thinking that she was a nobody and what she said is meaningless outside of the District of Columbia.  That would be wrong.  Camille Barnett was a representative for local governments in the Alliance for Redesigning Government organization.   The Alliance served

as the Steering Committee – thought leaders and change agents for the Reinvention of Government project that began in 1993 as soon as Bill Clinton took office.

Two of the other speakers at the discussion event were Jeremy Nowak, an Investment Fund Manager and Illinois Senator Barack Obama.  They both talked about regionalism.  In this context, the regionalism they were talking about was the establishment of the city-state, mega-regions.  Obama’s concern was primarily what to do about the pockets of poverty in the inner cities.   He talks about them being isolated but in fact, there is no place in our country where people in poverty have access to more opportunity than people in the inner cities.  Their problem is home-grown and it’s their culture. What Obama was really talking about was exporting the inner city poor to the suburbs.  Implicit in what he said and the way he said it was that the valuable inner city property could be gentrified if the inner city population was redistributed. 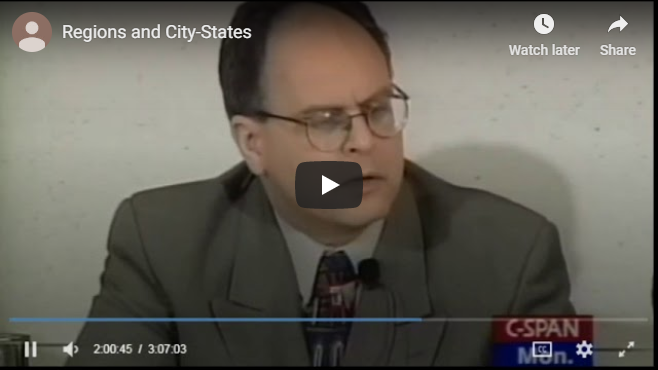 The mechanism for conversion to regions ruled by soviets was created by transportation legislation.  The Federal-Aid Highway Act of 1962 came with the requirement for urban transportation planning for metropolitan areas defined as having a population of 50,000 or greater.  The Bureau of Public Roads, predecessor to the Federal Highway Administration required the creation of regional policy bodies.  “A Metropolitan Planning Organization (MPO) must be designated by agreement between the Governor and local units of government”. MORE 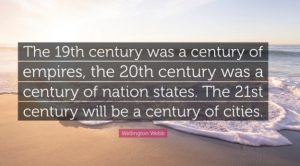 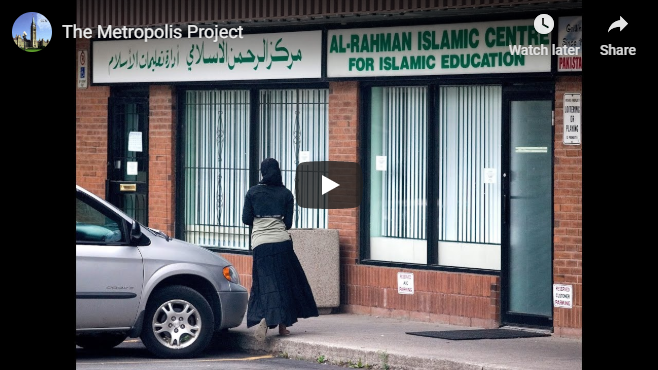 The keynote speaker at the Brookings event was Evan Dobelle, President of Trinity University located in the City of Hartford, CT.  Dobelle has a very interesting history.  He is a graduate of Harvard University, he was a Mayor, and he also served as the Massachusetts Commissioner of Environmental Management under Governor Michael Dukakis.  Dobelle was awarded the Gandhi, King, Ikeda Award by Morehouse College for “being a drum major for the social potential movement“.  Apparently their Big Three became Big Four with the addition of Fethullah Gulen in their new age, interfaith, human potentials movement. 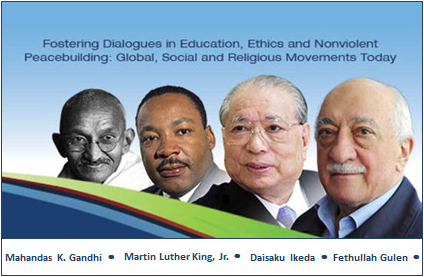 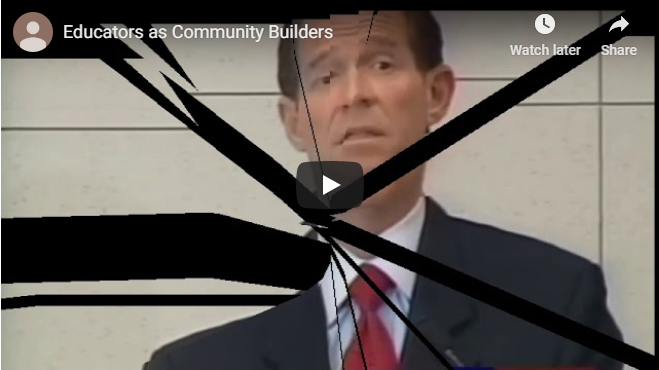 Essentially, what Dobelle was proposing was to move education outside of the walls of the college – integrating the education mission with city-state management presumably based on the San Francisco model.

[Side note:  wouldn’t the participants in the city and school system be double dipping in the California public employees’ pension systems?]

Dobelle described the important institutions of the major cities – the hospitals, the museums and the performing arts as being cut off from communities when city residents moved to the suburbs (interpretation by this writer).  He was proposing that the universities partner with these institutions to reconnect to the communities in the city management structure he was proposing. Further, he proposed that Trinity would have one or more partner international cities so that their students could be “citizens of the world”.    The other institutions he mentioned as anchors of the cities – hospitals, museums and the arts.

Dobelle proposed a “learning network” connecting learning communities in other locations – both domestic and international.  He said that Trinity College had plans for satellite campuses in Rome, San Francisco and Dublin.

After the Berlin Wall came down and Germany reunified, there was an alleged coup attempt on Mikhail Gorbachev’s government in the Soviet Union.  In 1992 Mikhail Gorbachev arrived in the United States and set up shop at the Presidio in San Francisco with the assistance of Rev. James Garrison.

The Gorbachev Foundation – The Constantine Report

Very early research (around 2005) on Mikhail Gorbachev at the Presidio.  Gorby’s interests were schools and the environment.   This research will be updated soon. 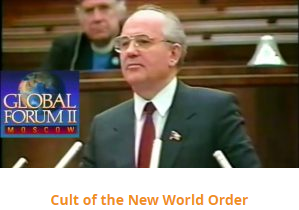 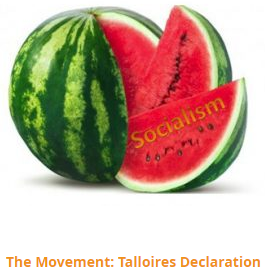 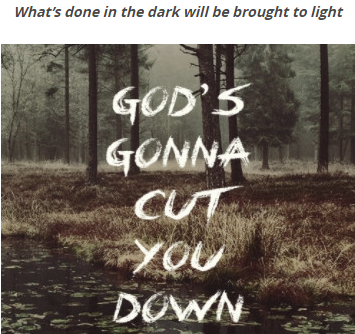