The Assaults on Trump Explained 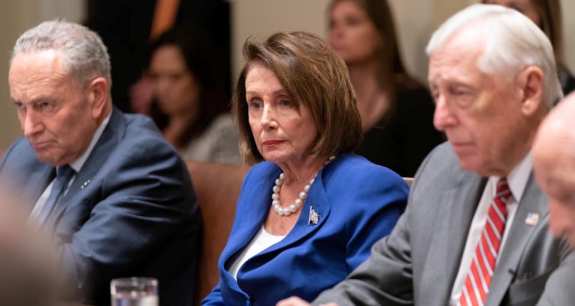 The Assaults on Trump Explained

Americans outside the Beltway have been struggling for almost three years to figure out what’s been going on in Washington, what to call it and how to explain it.

Have there really been dozens of small and large Trump scandals? Or is it all “fake news” and lies? Or is it all true and Donald Trump really is a Russian “asset” or puppet of Vladimir Putin? Or is he, as former Vice President Joe Biden claimed recently, “the most corrupt president in modern history?”

But how can there be a “scandal” if Trump has done nothing wrong, and the Mueller Report demonstrated that the charges of being corrupt and a Russian “asset” are demonstrably false?

The answer is that what we have been witnessing is not American politics as usual, but a sophisticated intelligence operation to destabilize and overthrow the legitimate government of the United States.

Each step along the path to impeachment is exactly what the CIA or the intelligence agency of a foreign power would do to use non-military means to destabilize and eventually replace the leader of an unfriendly government.

Consider for a moment that the “Resistance” to the Trump presidency and the questioning of its legitimacy began as soon as it was verified Hillary Clinton had been defeated.

As Jonathan Allen and Amie Parnes documented in their book Shattered: Inside Hillary Clinton’s Doomed Campaign, within twenty-four hours of Hillary Clinton’s concession speech Robby Mook and John Podesta assembled her communications team to engineer the case that the election wasn’t entirely on the up-and-up. They met at Clinton’s Brooklyn campaign headquarters to go over the script they would pitch to the press and the public to make the case that Trump’s victory was not legitimate and that Putin had specifically targeted Hillary Clinton and worked to throw the election to Trump was at the center of their argument. (Page 395)

And they’ve never stopped pitching that narrative to this day, just as our intelligence agencies develop narratives and promote them to raise questions about the legitimacy of foreign opposition politicians.

Note also that for the first time in modern American history the party in opposition to the President has completely refused to cooperate with him – even when he expressed a willingness to work with Democrats on their own agenda, as President Trump did on immigration and infrastructure.

Complete non-cooperation is precisely the same strategy Vladimir Lenin, Leon Trotsky and the Bolshevik members of the Russian Parliament pursued with the Kerensky government in the lead-up to the Bolsheviks’ October 1917 Communist Revolution – and it worked.

The masses of Russian people were so fed up with a government that couldn’t get anything done that they were prepared to support, or at least acquiesce, to a government formed by a political party composed of a tiny fraction of the Russian people; no more than 200,000 out of a population of over 170 million.

Notice also the vast sums of dark money flowing to the Democrats and the Far-Left organizations opposing President Trump. George Soros alone accounts for tens of millions of dollars flowing to anti-Trump organizations to train agitators and political organizers to create opposition to the President.

This model was followed by the Communist International for many years, as hearings before the House Un-American Activities Committee proved.

As Jack D. Meeks, Doctor of Philosophy, observed in his dissertation, FROM THE BELLY OF THE HUAC: THE HUAC INVESTIGATIONS OF HOLLYWOOD, 1947-1952, “communists were superb at identifying a worthy cause [to gain] the support of the American people, such as advocating for civil rights and unemployment insurance or resisting Nazism” and then building front organizations around them.

Examples of communist front organizations from the period studied by Meeks include such innocent sounding organizations as the American Slav Congress; the Win-the-Peace Congress; the Civil Rights Congress; the Committee for a Democratic Far Eastern Policy; the Council of African Affairs; the Council for Pan American Democracy; the Political Action Committee; the Independent Citizens Committee of the Arts, Sciences and Professions; the Federation of Atomic Scientists; and the Southern Conference for Human Welfare.

Occasionally exposés of these organizations would hit the press, but most of the time, particularly after the House Un-American Activities Committee was shut down, little of the Russian Communist interference in American politics came to public attention.

Are our opponents in today’s Russia, or China, or other members of the anti-American Axis using the same techniques today, particularly when presented with such a golden vehicle as the Clinton machine’s post-election narrative?

Most people, and certainly those in the establishment media, have forgotten or ignored Fox News reports that the Russians indicted for meddling in the 2016 presidential contest were also behind anti-Trump rallies after the election, revealing another aspect of Russia’s alleged interference as it worked to sow discord in the United States.

“After the election, the defendants allegedly staged rallies to support the president-elect while simultaneously staging rallies to protest his election,” Deputy Attorney General Rod Rosenstein said in a press conference.

“For example, the defendants organized one rally to support the president-elect and another rally to oppose him, both in New York on the same day,” said Rosenstein.

Facebook advertising Vice President Rob Goldman* said he was “very excited” to see the indictments outlining charges against 13 Russian nationals. However, Mr. Goldman’s excitement was largely ignored by the media and the public because, in a series of tweets, Goldman said that the “Russians stole the 2016 election away from Hillary Clinton” narrative is bogus.

As the late Bre Payton reported for The Federalist, Goldman tweeted that the social network shared with Congress the ads from Russian nationals to “help the public understand how the Russians abused our system.”

The majority of the Russian ad spend happened AFTER the election.  We shared that fact, but very few outlets have covered it because it doesn’t align with the main media narrative of Trump and the election.

The main goal of the Russian propaganda and misinformation effort is to divide America by using our institutions, like free speech and social media, against us. It has stoked fear and hatred amongst Americans.  It is working incredibly well. We are quite divided as a nation.

Mr. Goldman was right, but you won’t see anything in the establishment media to help you identify and expose Russian intelligence activities we know have been going on for a century, or the intelligence operations of others interested in destabilizing our government, because, wittingly or unwittingly, the establishment media are part of the destabilization operation.

George Rasley is editor of Richard Viguerie’s ConservativeHQ.com and is a veteran of over 300 political campaigns. A member of American MENSA, he served on the staff of Vice President Dan Quayle, as Director of Policy and Communication for then-Congressman Adam Putnam (FL-12) then Vice Chairman of the Oversight and Government Reform Committee’s Subcommittee on National Security and Foreign Affairs, and as spokesman for Rep. Mac Thornberry former Chairman of the House Armed Services Committee.

*Mr. Goldman has just left Facebook (departure announced October 22, 2019), his comments posted after the Russian indictments were retweeted by President Trump, which caused outrage on the Left. For telling the truth, and thereby giving aid and comfort to President Trump, Goldman was apparently forced to apologize to his colleagues on Facebook’s internal social network