Tacoma to Tax Gun Stores, Pawn Shops Out of Existence 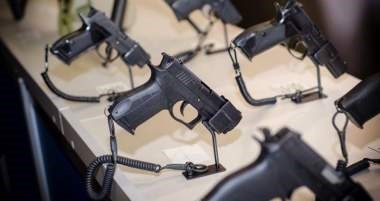 Tacoma to Tax Gun Stores, Pawn Shops Out of Existence

The bill proposed by Tacoma city council member Ryan Mello heads for a final reading tomorrow. If passed, it will start levying a $25 tax on every firearm sold in the city starting January 1, along with two cents per round on ammunition of .22-caliber or less, and five cents per round on all other calibers.

Mello admits that his bill probably won’t do anything about gun violence, but it would raise an estimated $30,000 to study the problem: “I do not pretend to believe that this tax and these revenues are going to solve our gun violence problems in Tacoma [but] I certainly believe that they will help invest in some of the programs that do make a difference.”

The pushback from the owners of gun stores and pawn shops was predictable. Aero Precision, a maker of after-market firearm accessories that employs more than 400 people in Tacoma, warned the city council that it would “explore options” if the bill passed: “We stand strong in opposition [along with] the National Shooting Sports Foundation [NSSF] and our local dealers and customers who will be affected by this tax, and we will be forced to explore our options if the Tacoma City Council does vote this into place.”

The impact would be felt most severely by the estimated eight to 10 gun stores and nine or 10 pawn shops currently operating in the city. Bruce Smith, the manager of Surplus Ammo and Arms of Tacoma, told the council last Tuesday night: “We have 11 employees [who] will be unemployed at the time this proposal of taxing firearms and ammunition would be imposed. It wouldn’t make any sense for a consumer … to buy a case of ammo at [our] store or a rifle at [our] store when [he] can simply go a few miles in either direction [to buy them outside city limits.]”

Added Smith: “All [the law would do] is put gun shops out of business.”

Those stores and shops generated about $218,000 in revenues to the city in 2018, and the new law is estimated to generate an additional $30,000. But the council could be in for a serious awakening when those new revenues fail to appear and the overall revenues drop as those shops and businesses close or move away. There are certain economic laws that members of city councils cannot repeal, one of them being when the cost or price of something is increased, less is demanded. Raise that cost or price sufficiently high and none will be demanded.

Raising taxes would have additional unintended consequences, including the boosting of private sales between individuals and the making of 3D guns at home.

They would have precious little impact on criminals, crime, or gun violence, but would fall heavily upon law-abiding citizens instead. For instance, the tax on ammunition would impact high-volume users such as target shooters rather than those who might purchase a firearm for home or personal protection, along with buying a small number of rounds. Criminals would, as they always have, find ways to obtain weaponry and ammunition that ignores the new laws.

Missing from the conversation is any mention of the real purpose behind such taxes: the elimination of private ownership of firearms altogether. The process is variously called “coercive gradualism” or “revolutionary parliamentarianism,” whereby the drip, drip, drip of infringements of precious rights takes place incrementally at the local level over long periods of time.

Lawrence Keane, senior vice president for NSSF, said he worries that other small towns and cities will adopt similar measures: “Are we concerned that politicians will try to seek their antigun agenda through taxation? Yes. This is what this is about.” In 2017, the Washington state Supreme Court ruled in favor of Seattle’s new taxes and against the NSSF, declaring that the tax’s primary purpose was not to regulate firearms ownership but “to raise revenue for the public benefit.”

In its study “Understanding Coercive Gradualism,” the U.S. War College admitted its effectiveness as a strategy to achieve illegal ends:

Coercive gradualism offers both opportunities and consequences to states seeking to expand their influence, if not control, over others’ sovereign territory. Once an aggressor makes the first move, rolling it back may prove very difficult. There are no simple solutions.

This is the very strategy recommended by Thomas Jefferson against the gradual incursion of the state into private affairs: “Educate and inform the whole mass of the people.… They are the only sure reliance for the preservation of our liberty.”