Under the guise of creating “Welcoming Schools,” the far-left National Education Association (NEA) and the radical homosexual group “Human Rights Campaign” (HRC) are joining forces to brainwash and abuse American children. Christians, Jews, Muslims, and others who believe in science and biology are not “welcome.”

In an e-mail about its “Welcoming Schools” program sent out to teachers on October 16, the extremist LGBT group’s foundation announced what it described as a “powerful partnership” with the NEA, America’s largest teachers’ union. Teachers who contacted The Newman Report about the partnership expressed serious concerns.

“It’s official! Welcoming Schools and the National Education Association (NEA) are partners,” the Human Rights Campaign Foundation boasted in the e-mail. “This summer, ten NEA trainers from various Social Justice cadres were trained to be Welcoming Schools Facilitators. The Welcoming Schools NEA cohort will be presenting at both nationwide (NEA LGBTQ) and statewide (NJEA) conferences.”

The group is also hoping more school districts will hand over taxpayer money to provide radical LGBT “professional development” to teachers. “We look forward to being able to bring essential professional development to many more educators through this partnership,” the HRC declared in its email, linking to a website touting its indoctrination sessions for teachers on how to “create a positive LGBTQ and gender inclusive school climate.”

To get a sense of the sort of indoctrination being imposed on children captive in these tax-funded “welcoming” government schools, the HRC included a bizarre video titled “Back to School for Non-Binary Youth” in its e-mail announcement. Check it out: 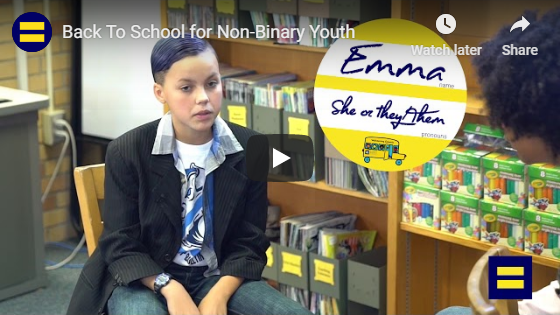 The video features two heavily indoctrinated children confused about their gender discussing, among other topics, their “preferred pronouns,” “Z” and “they.” The children also lament the supposed need to “educate” their own teachers on the latest gender-bending madness. One of the children, perhaps not realizing that this sort of gender confusion did not exist even just a few short years ago, thought schools should have a history unit on people who used “pronouns” such as “Z” or “they.” Seriously.

While HRC is raking in taxpayer funds through its “professional development” indoctrination sessions for teachers, it also has backers with very deep pockets. Some of the organizations, companies and individuals that fund it include billionaire George Soros, tax-funded abortion giant Planned Parenthood, Big Tech firms like Google, megabanks such as Goldman Sachs, and many Fortune 500 companies.

In addition to corrupting, confusing, sexualizing, and perverting children, the Human Rights Campaign also works hard to quash religious freedom. One of its top lobbying priorities, for instance, is the misnamed “Equality Act,” which would unleash the full force of the federal government to persecute any and all religious groups that refuse to support homosexual “marriage” or gender confusion.

As the American College of Pediatricians explained, trying to convince children that it is normal or healthy to impersonate the opposite sex, including through surgical mutilation of one’s genitals and the use of dangerous hormones, must be recognized for what it is: “child abuse.” Unfortunately, the entire government-school system is now involved in child abuse on an unprecedented scale.

Parents who love their children must act, immediately.