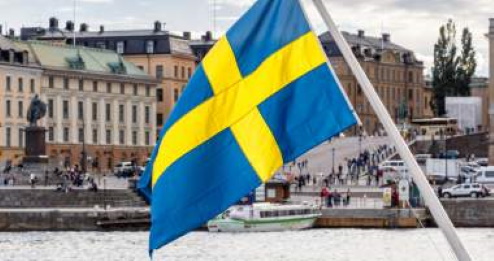 Neither Swedes nor anyone else ever thought they would read that “bomb attacks are now a normal part of Swedish life,” but that’s the headline over a story in the latest edition of London’s Spectator.

Why are the peace-loving Swedes subjected to bomb attacks morning, noon, and night, with cops sometimes responding to multiple attacks at the same time? Muslim gang violence.

Thus does the latest news from the land of the Vikings demonstrate once again the peril of open borders and growth of a hostile alien population?

The Spectator report comes from Quillette editor Paula Neuding, who’s been writing about the bomb attacks for some time. Such is their frequency that the national news in Sweden barely reports them.

“One night last week, explosions took place in three different locations in and around Stockholm.” she wrote. “There were no injuries this time, just the usual shattered windows, scattered debris and shocked people woken by the blast.”

“The police bomb squad was already on its way to the first explosion in the district of Vaxholm when it had to turn around and prioritize the detonation at a residential building in the more densely populated city centre,” she continued.

But here’s the nut of Neuding’s story:

“Normalization” is a term that we have come to associate with domestic violence: the victim begins to think of abuse as a part of everyday life. Explosions have become so normalized in Sweden that SVT, Sweden’s equivalent of the BBC, did not even mention the three explosions in the country’s capital on its national news programme that evening. Instead, the main domestic story was the purported censorship of ‘big female bodies’ on Instagram. Apparently, we mustn’t be referred to as ‘women’ any more, but ‘female bodies’, lest anyone’s gender be assumed. The explosions were left to the local news….

Consider the statistics: between January and June this year, more than 100 explosions were reported in the country, up from about 70 in the same period last year…. More than 160 suspected attacks with explosives were reported last year. There are no comparable figures available for earlier years because it’s such a recent phenomenon. Until recently no one would have thought of adding a column on bombings to the national Swedish crime statistics.

Writing at Zero Hedge, “Tyler Durden” offered figures for January through July, citing Swedish media: 120 bombings compared to 83 through the same seven months last year, a 45-percent increase. Sources for last year’s data conflict. Some sources put the figure as high as Neuding’s; another at about 108.

Whatever the number, Sweden’s in trouble.

Neuding doesn’t mention Islam or Muslims, but that’s clearly what she’s writing about. Savage gang violence appeared in Sweden with the massive influx of Muslim “refugees” that began in 2014.

The country’s seething Islamic colonists have set up “clan structures” and “parallel societies” in which the “Swedish state is weak,” meaning the justice system cannot operate, and so “witness intimidation is systematic and ordinary citizens are pressured to submit to clan rule.”

Sweden’s gangs, which mainly operate out of the country’s socioeconomically weak immigrant neighbourhoods, do not only use explosives to assert their dominance. Sweden had 45 fatal shootings in so-called criminal environments last year — a tenfold increase in one generation….

According to the newspaper Dagens Nyheter, nine out of ten perpetrators of Sweden’s gang shootings are either first- or second-generation immigrants. The country has gone from having among the lowest rates of violent crime in western Europe to one of the highest. When it comes to bombings, no other developed country in the world which is not at war has experienced anything like Sweden’s epidemic.

Although the government appears to be cracking down now with wire taps and video surveillance, its pathetic initial response to the bombings was a laughable “failed attempt at an ‘amnesty for explosives.’” Turn in your bombs, Muslim immigrants, and we won’t arrest you.

Colonization Must Be Stopped

Yet the real peril isn’t bomb attacks, but instead fear of the truth. No one, Neuding wrote, wants to deal with the “new reality” of either bomb attacks as a practical matter or the more abstract problem: “Gang violence is intimately tied to the issue of immigration and failed integration, so those who highlight the problem have often been smeared as bigots.”

In early October, Judith Bergman of the Gatestone Institute reported that Swedes are fleeing their once peaceful cities and towns where Muslim immigrants have seized control. No wonder.

“It’s Time for Sweden to Admit Explosions Are a National Emergency,” Neuding wrote for Quillette in July.

And it’s time for Swedes to admit that Muslim colonization will soon destroy their country if they don’t fight back.