Roger Stone: Senate MAY Convict an Impeached Trump — and Only SEVEN Senators Have Ruled it Out 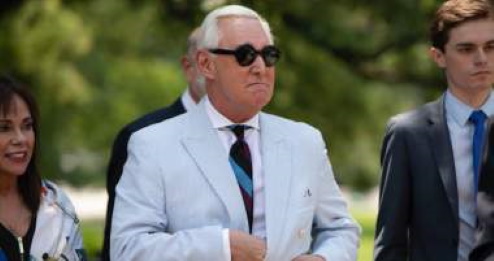 Roger Stone: Senate MAY Convict an Impeached Trump — and Only SEVEN Senators Have Ruled it Out

Conventional wisdom says that the Democrat-controlled House may vote to impeach President Trump, but the GOP led Senate would never convict. But longtime Trump friend and confidant Roger Stone (shown) has a warning.

This thinking is “naïve,” he says.

It is true that an impeachment conviction requires a super-majority of two-thirds, or 67 senators, meaning that at least 20 Republicans would have to side with the Democrats (more if a few-red-state Democrats voted nay) to oust the president.

Yet Stone, in a Friday interview, stated that this isn’t inconceivable. “‘I think that those who sit back and say, ‘Well, the House may impeach the president, but surely the Republican Senate will never convict him,’ I think are being naive,’ said Stone, adding that Trump is ‘in for an incredible fight’ because the media and the ‘two-party duopoly’ is against him and hope the attacks against him ‘will wear his support down in the states where there are wobbly Republican senators, so they feel comfortable voting for his removal,’” reports Town Hall’s Scott Morefield.

“Stone said the notion that anything in Washington these days is simply ‘Republicans vs Democrats’ is ‘outdated thinking,’” the site continues. “‘This is insiders versus an outsider,’ he said. ‘This is the status quo versus a disruptor.’”

This surprises me not at all because I’ve long had the same thought. People can forget something: The establishment GOP’s “support” for Trump has only been directly proportional to his popularity and level of policy success.

Prior to the president’s surprise 2016 victory, establishment Republicans’ attitude toward him ranged from condescending and supercilious to openly hostile, with neoconservative magazine National Review devoting a whole issue to opposing his candidacy. Afterwards, they initially walked a fine line, generally avoiding staking out an explicitly pro- or anti-Trump position as they waited to see if he really would implode.

As the president survived one salvo after another and piled up policy triumphs, the establishment GOP decided to, at least to an extent, ride the winning horse. But these are all political calculations — which can change wildly with the political climate.

Perhaps adding weight to Stone’s warning is a Daily Caller survey in which the site “contacted EVERY SINGLE Republican Senate office just last week to ask them if they would rule out impeaching and removing Trump from office,” Morefield also reports. “Out of 53 senators, how many do you think responded in the affirmative?”

Morefield then continues, “Give a round of applause to Senators Jim Inhofe, Thom Tillis, Cindy Hyde-Smith, Roger Wicker, Mike Rounds, Rob Portman, Jerry Moran for seeing through this ridiculous charade right away. But what’s up with the other 46? Even accounting for some who didn’t respond because they didn’t get the message in time or others who know how they’ll vote but want to hold out official comment because of their potential role as ‘juror,’ that’s a pretty high number.”

Yes, there’s no doubt that many want to maintain the appearance of impartiality, of open-mindedness. Nonetheless, it’s highly unlikely that many establishment Republicans’ feelings about Trump have changed. So it’s logical to assume that the president has his Brutus waiting in the wings.

In fact, Morefield reminds us that GOP consultant Mike Murphy “claimed last month that upwards of 30 Republican senators would vote to remove Trump from office if only their vote were held in secret. Sure, he’s a former Romney, McCain, and Jeb! advisor, so take what he says with more than a little grain of salt, but it’s still a disturbing thought.”

Add to this that since “Romney, Murkowski, Collins, and Gardner would likely vote with Democrats,” opines commentator Missy Crane, “only 16 defectors are now necessary for Senate conviction.”

While this becoming a reality in the current climate isn’t highly probable, “what’s to say that the Deep State hasn’t collected ‘dirt’ on some of these senators, that could be used as blackmail against them?” Crane wonders. “Maybe that sounds like a spy novel, but would you really put it past these vultures?”

Whatever the case, “Stone’s suggestion for the president, and it’s a great one, is to use his ‘incredible fundraising juggernaut’ to advertise in states where ‘there are Republican senators who may be thinking about joining this lynch mob,’” Morefield also relates.

“‘As long as the president remains more popular in those states than those individual senators, they will be loath to cast a vote against the president, particularly based on the thinnest read that we have seen so far,’ he said.”

“In sum, some of these ‘wobbly’ GOP senators may dislike, even hate President Trump in secret, but odds are they like their power and position even more,” Morefield continues. “They need to unequivocally know that stabbing Trump voters in the back will mean the end of their political career, period.”

For sure. Just as people can lust after money, food, or sex, so can they have a far less common obsession: power lust. Most politicians do exhibit this problem, too.

This means that as long as the economy is strong and Trump is relatively popular, he’s probably safe. But if economic and approval numbers ever go south, watch out. For you might say that, politically speaking, politicians are like nations: They don’t have friends. They have interests.