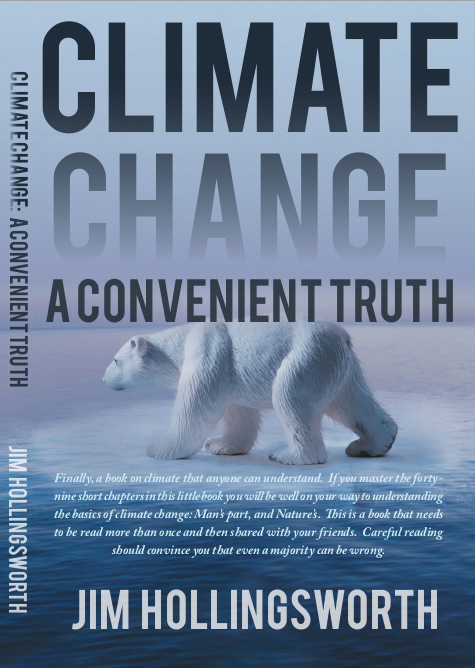 Preview of an Important New Book

A lot has been written about global warming/climate change, especially in the last couple of years.  We have been led to believe that if we do not take immediate, expensive and decisive action the world as we know it will come to a dramatic end.

But, is it true?  Where is the evidence that man is the cause of this warming?  Can we do anything about it, or do we just let nature have its way?

No-one can dispute the fact that the earth is warming.  It has continued to warm since the end of the last ice age, about 10,000 years ago.  At one time North Idaho was buried under a mile of ice.

But what is the evidence that man is the chief cause of this warming, or that we can stop a further increase in temperature simply by ending our use of all fossil fuels, (coal, oil, natural gas etc.)?

This book was written for you.  It is time that you had a chance to know the truth.  The mainstream media wants to convince you that we are headed for a catastrophe if we simply do nothing.  Twelve years ago we were told we only had ten years left, yet those ten years have come and gone without any change in our climate.

There are three types of people who consider climate change.

So, in which group are you?  This book was written for the third group.  It is written so you can understand climate change and how it affects you.  You have to understand that the program of the first group has to do with a lot more than just climate.  You can have no effect on them unless you know the truth.

You can seek to know the truth, or you can continue to ignore it.  It is important, however, that each one of us not only knows the truth, but does something about it, to get our government to take a stand on doing what is right.  This book details most of the important issues of climate change.

Finally, are you going to believe everything put out concerning the Green New Deal and similar programs, or will you take a couple of hours to read this book and then do something about it?  I trust you will.

APPENDIX 2 Hansen/Hollingsworth Storms of My Grandchildren

APPENDIX 5 The Father of Climatology Speaks

Will you still believe that the Green New Deal and everything that goes with it is true?  This book presents part of the truth.  You can either accept or reject it.  The choice is yours.

If you follow the program of the climate alarmists, the Chicken Little folk who believe we have to spend trillions to stop an imaginary climate change, then we will not provide for a constructive tomorrow; we will just be part of the continuing problem.

There were some great principles in the founding of America, which allowed us to use our coal, oil and natural gas to make America the greatest nation in the world: A nation that was ready and able to help other peoples when they had dire needs from floods, earthquakes, fires, and other calamities.  If the program of the Green New Deal becomes the law of the land we will never be able to help the needy again.

There is much more to climate change than was shared in this book.  Some of that is contained in the appendices which follow.  There is also a list of great books, each one of which has more of the truth about climate change.

Will you go on living in the dark, or will you take the time to inform yourself so that we can continue to live in the light?  Climate alarmism is a fraud, and hopefully you will have seen that by reading this short book.  But there is much more to understand.  I trust you will make the effort to do so.  If you believe the information in this book is wrong then I would encourage you to do further research.  There is lots of information on the internet; just search for climate change, climate alarmism, or climate skeptics.

No matter what, thanks for taking the time to read this short introduction.  Please share it with your friends, buy the book and see that it makes sense.

Jim Hollingsworth’s book, Climate Change: A Convenient Truth, is a breezily-written short book that is worthwhile to anyone who is curious about this “global warming/climate change” phenomenon that has been sweeping Western Civilization since the 1980s and has now become a multi-trillion-dollar industry. The book comprises forty-nine (very short) chapters, plus six Appendices (for anyone who cares to read more on the topic, in-depth). Its non-intimidating, simplistic style should not offend anyone — whether you’re in middle-school, or college, or have been away from school for 50 years.

As a litigation attorney for nearly 30 years, I know a lot about evidence. The evidence presented for climate change simply does not add up. There is no basis for saying the science is settled or 97percent of scientists support global warming theories. Many highly qualified scientists have shown that there is no threat from carbon dioxide.  Jim Hollingsworth shows the valid evidence. His book is an important resource for those who want to know what the science really shows.

“Hidden in this small book is all the information one needs to fully understand the frauds which are being perpetuated on society by environmental extremists desiring to foist their miserable personalities upon an unsuspecting public.  Hollingsworth moves from the now exposed acid rain fraud of yesteryear to the biggest fraud ever perpetrated on society, man caused Climate Change.  This deception has now cost the nations of our planet well over a trillion dollars in the belief that man is more powerful than Nature and thus can set the Earth’s thermostat.

Without ever getting into the weeds of math and science anyone with a tenth grade education will be able to understand precisely how they have been hoodwinked these many years. A four hour investment in reading time will yield multiple eureka moments.

Climate Change: A Convenient Truth is a vital, complete, and above all truthful presentation on climate science. Science must pursue the untainted truth. This book dispels the confusion that exists about “climate change” because politics and money rather than science are involved in promoting anthropogenic global warming. Regardless of your background, you will benefit from learning the truth about climate science.

This book is much needed to give people an impartial view of what is really happening to our climate and what is not happening. All of us tax payers are in fact funding billions and soon trillions of dollars to be spent on “decarbonizing” our atmosphere even though CO2 is food for all plants. I hope that many people start asking more questions about the logic of today’s energy policies after having read Jim’s well written book.

Jim Hollingsworth’s new book, Climate Change: A Convenient Truth, lays it all out – in short, readable chapters that address virtually every fear-inducing claim concerning climate change – and finds them wanting. If you’re worried about dangerous manmade climate change, but still have an open mind, this is a must-read. If you’re already skeptical, but want an easy-to-use reference guide, this is what you’ve been looking for.

Paul Driessen – Author of Eco-Imperialism: Green Power-Black Death and many articles and books on energy, climate change, human rights and the dark side of renewable energy.

My good friend Jim Hollingsworth has written a very accessible book on the sham, scam, and hoax of global warming hysteria. Folks, there is nothing to be afraid of, and Jim’s informative book will settle whatever fears you may have. Give it a read – you won’t be disappointed! 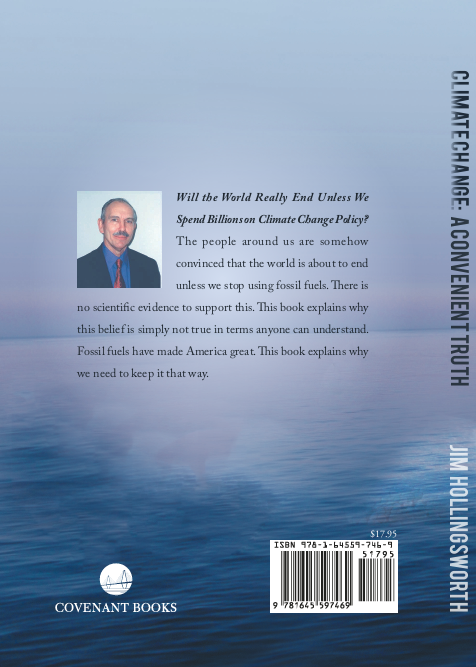