From Marx to Woodstock to Insanity   Part II 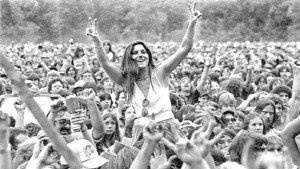 From Marx to Woodstock to Insanity   Part II

Following Woodstock, the slovenly intellectual attitude of the hippies rolled on through the seventies, then began to lose steam in the eighties.  Perhaps it was Ronald Reagan’s presence in the White House that slowed its progress, perhaps it was the glorification of Wall Street and Tom Wolfe’s depiction of its titans as “Masters of the Universe,” or perhaps it was the proliferation of personal computers.  (In 1982, Time replaced “Man of the Year” with “Machine of the Year” and gave the honor to the personal computer).

Whatever the reason for its loss of momentum, the long march of Marxism persisted and lived to see another day.  In the nineties, thanks in no small part to Bill Clinton’s unpunished sexcapades in the Oval Office, the anything-goes attitude of Woodstock began making a comeback.  And in the 21st century, communism and relativism started making a comeback as well, bursting into full bloom by the end of Barack Obama’s second term.

Clearly, Obama took Antonio Gramsci’s long-march strategy to heart.  Dr. John Drew, who knew Barack Obama from a student communist club to which they both belonged while attending Occidental College, said that Obama made it clear he was looking forward to “an imminent social revolution, literally a movement where the working classes would overthrow the ruling class and institute a socialist utopia in the United States.”

However, by the time Obama was in a position to run for president, he obviously had made the decision to adopt Gramsci’s long-march strategy as the best way to bring about communism.  With a compliant media covering for him by refusing to seriously investigate his radical background, he was able to perpetrate the biggest fraud in American presidential history and set about trying to fundamentally transform the United States of America from a constitutional republic to a top-down Marxist government.

Obama is now gone (sort of), but the damage he did to the psyche of young people and low-information adults was enormous.  As a result, the Marxist and relativist genies are once again out of the bottle and fomenting class warfare.

Today, the carriers of the communist and relativist torches are heirs to the Woodstock legacy, committed to changing the world through a warped combination of peace, love, and force.  Their Orwellian message is straightforward:  “If necessary, we will force you to practice and promote peace and love — as defined by us, of course.”

To accept such twisted thinking is the result of a retarded growth in one’s intellectual development.  Which is to say that liberals are the equivalent of children occupying adult bodies, and anyone who has ever tried to argue with a child can appreciate why arguing with liberals is a monumental waste of time.

As these overgrown children continue to fail in their efforts to change the world to suit their ideological beliefs, mental illness sets in and they embrace violence as an appealing option for venting their frustration and anger.  So much so that frustration, anger, and violence are the hallmarks of today’s Woodstock progeny.  Second only to lying, violence is their preferred method of persuasion.

Simply put, today’s liberals are certifiably insane.  They are actually suffering from a serious psychopathic disorder, which they masquerade as political activism.  In other words, their political beliefs are not what causes them to go insane; rather, they engage in political activism as an outlet for their insanity.

Even so, if far-left crazies were the only problem, the social upheaval in America might be manageable.  The bigger problem, however, is that these angry psychopaths are now taken seriously by millions of frustrated, angry people, particularly young people who have been indoctrinated by Radical Left professors at universities throughout America.  These knowledge-challenged kids have been brainwashed into believing that ideas once considered to be abnormal are normal and ideas once considered to be normal are abnormal.

Don’t be fooled by the Radical Left’s self-righteous proclamations of compassion.  Like their hippie forebears, today’s radical youths are devoid of compassion for those who are oppressed.  In truth, they are nothing more than bored, over privileged children who have been brought up in morally deficient homes.  Which makes it laughable that they are the heart and soul of America’s 21st century grievance culture, even though most of them have never actually experienced oppression.

Worst of all, since they do not have to struggle for day-to-day survival, they have plenty of time to become involved in Radical Left crusades.  They fit Eric Hoffer’s “true believer” profile to a tee, so it’s no surprise that they gravitate toward sham crusades like the “existential threat” of manmade climate change and the moral obligation of taxpayers to provide healthcare for millions of people who have entered the country illegally.

As one certitude after another has been shouted out of existence by progressive thinkers, it has become an open invitation for morally lethargic people to continually push the decadence envelope, the consequences of which are dire.  When a society abandons its certitudes, when radical ideologues are allowed to impose their beliefs on an entire population, it loses its will, its moral fiber, and the consensus needed to defend itself against those who would destroy it.

This is where the United States of America is today — at a crossroads between communism, relativism, violence, and dictatorial rule on the one hand and a return to the principles of liberty that made America the freest, wealthiest, most exceptional country in the history of mankind on the other.

Obviously, no country can survive when millions of its own citizens hate everything it stands for and are hellbent on destroying it, beginning with its founding principles.  What made the United States unique for more than two hundred years was that the vast majority of Americans were on the same page when it came to the morality, dignity, and civility needed to sustain and nourish a civilized society.

Can America’s cultural pinched nerve be quelled?  Can the underlying societal inflammation be dissipated?  It’s a good question, and one that is difficult to answer with any degree of certainty.  The biggest problem is that human nature never changes, and traits like envy, hatred, and the desire for material wellbeing without work make it relatively easy for anti-liberty demagogues to sell misery and oppression to the masses disguised as fairness.

It’s been a long, tortuous road to get to where we are today.  Marx, Gramsci, relativism, Woodstock, and now the Radical Left’s takeover of the Democratic Party are markers along the way.  What happens between now and November 3, 2020, and especially on November 3, 2020, will go a long way toward determining if the long march of Marxism will be halted or if Americans will have to live with an ever-worsening pinched nerve until the next American Revolution begins.