Union to Teachers: Inject Race and Racism Into Every Subject and Every Conversation 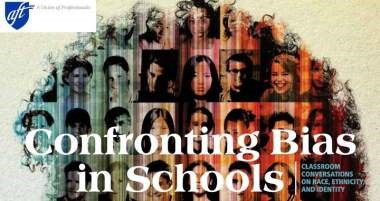 Union to Teachers: Inject Race and Racism Into Every Subject and Every Conversation

The American Federation of Teachers (AFT), the radical union that reaches into tens of thousands of classrooms, is pushing saturation indoctrination on race, “racism,” “racial identity,” “bias,” “prejudice,” “discrimination,” “hate,” “white supremacy,” and, of course, “equity,” “tolerance” and “diversity.”

As American students at all grade levels fall further and further behind in all academic areas, the 1.7 million-member union is telling its teachers that they must focus not on helping their students learn the basic subject matter and academic skills that will enable them to be productive, prosperous, self-supporting citizens, but that teachers must instead become non-stop agitators for “racial justice” and fulltime race psychologists/sociologists — both inside and outside the classroom.

The Fall 2019 issue of the AFT journal American Educator is devoted to “Confronting Bias in Schools: Classroom Conversations on Race, Ethnicity, and Identity.” However, a more accurate title might have been “Compounding Bias in Schools,” or “Enflaming Racial Tensions and Hatred in Schools.”

“The President Is Leading a Homegrown Hate Movement”

AFT President Randi Weingarten leads off the issue with an attack on President Donald Trump, declaring, “The president is leading a homegrown hate movement.” In her “Where We Stand” column, Weingarten proclaims that “President Trump has trampled rights enshrined in the Constitution and waged a war on truth. He has fanned biases that aim to dehumanize ‘the other’ and that erode our democracy. He is enamored of despots, and distances our allies…. We can’t ignore Trump’s bigotry and cruelty, or the fact that his erratic behavior is intended to create chaos and confusion.”

This anti-Trump tirade follows only a few sentences after Weingarten had asserted that teachers “are called on to be guardians of democracy and cultivators of decency.” She also says teachers must “help young people value members of other groups,” and classrooms must be places “where disagreements are over ideas, not people, and dissenting views are respectfully heard, not shouted down.” But Weingarten’s decency, civility, and tolerance apparently does not extend to the tens of millions of deplorables who voted for Donald Trump, and the tens of millions more that disapprove of the union’s strident propaganda concerning LGBTQ programming, gun control, global warming, and other radical agenda items. Neither, obviously, does her lecturing on civility and inclusivity apply to the legions of militant AFT cadres that participate in riotous protests, lead their students in profanity-strewn “I Hate Trump!” chants, and engage in disruptive walkouts and school strikes.

SPLC’s Non-stop Hate Baiting
In addition to Weingarten’s opening salvo, a strong clue as to where the AFT journal was headed (and where it was coming from) was provided by American Educator’s first article in the issue entitled “Assessing — and Interrupting — Intolerance at School,”  by Maureen Costello and Coshandra Dillard. So, who are these two authors that are given top billing? Costello is a senior staffer at the Southern Poverty Law Center (SPLC), the viciously biased organization that regularly defames and demonizes pro-life, pro-family, pro-morality, Christian, patriotic individuals and organizations. In addition, Costello is director of the SPLC’s Teaching Tolerance program, the curriculum that is inculcating students in thousands of schools in political correctness and Marxist socio-political dogma. As The New American pointed out in 2011, in an extensive expose’ (“Protecting Rights: Loyal Americans Targeted by the SPLC”), among the many atrocious materials presented in the group’s Teaching Tolerance program is an adoring promotion of unrepentant communist terrorist Bill Ayers, a leader in the 1960s and ’70s of the SDS (Students for a Democratic Society) campus rioters and the bombers/murderers of the Weather Underground. Coshandra Dillard, Costello’s coauthor for the AFT journal piece, is a staff writer for Teaching Tolerance.

The SPLC duo begin their race rant this way: “Three years ago — during and immediately after the presidential campaign — we documented a surge of incidents involving racial slurs and symbols, bigotry, and the harassment of minority children in the nation’s schools. We called this phenomenon the ‘Trump Effect,’ because it appeared that children were emulating the racist, xenophobic, and coarse language Donald Trump was using on the campaign trail.” A major problem for the SPLC writers is that the actual documentation shows that hundreds (literally) of the alleged crimes in the “surge of incidents” to which they refer have been, in fact, hoaxes — fake “hate crimes.” But that hasn’t stopped the “progressive” politicians, the liberal-left media, or the Southern Poverty Law Center from continuing to ride the hate crimes bandwagon. Even after high-profile, media-promoted incidents have been repeatedly, thoroughly exposed and discredited as total fabrications — with the notorious cases of Jessie Smollett and Nick Sandmann-Nathan Phillips as prime examples — the professional race baiters and their Fake News Media allies have refused to drop their hate-hoax promotions. The folks at SPLC’s Teaching Tolerance have produced multiple stories parlaying the fake news that it was 16-year-old, pro-life student Nick Sandmann who was the aggressor, the offender, in the now infamous confrontation with “Native elder” Nathan Phillips. Videotape and witnesses have completely shredded that false narrative, showing that it was Phillips who was the instigator of the event. But the SPLC race agitators march on, continuing to insist that American society is, was, and ever has been thoroughly, irredeemably racist.

“Hate crimes are rising…” Costello and Dillard insist, “And the racism, bigotry, and misogyny of a virulent white nationalist movement are being parroted by mainstream political and media figures.” “Whether looking at news media reports or reading educator stories, it’s clear that hate and bias are national, not regional, issues,” they darkly warn.

It’s the same America-is-racist mantra that the SPLC has continuously played like a broken record for years. It has served them well, pulling in hundreds of millions of dollars to their slush funds and political war chest, including more than $121 million the “poverty” organization has parked in offshore tax havens. Stirring up hate, turmoil, and strife has paid the SPLC (and the AFT) huge dividends — financially and politically.

Adam Sanchez contributes an article to the Fall 2019 American Educator entitled “Teaching the Complex History of Abolition and the Civil War.” Abolition and the Civil War are indeed complex subjects, but there is little reason to hope that Sanchez will handle the topic in a reasonable, fairhanded manner devoid of left-wing dogma and anti-American propaganda. Why do we say that? Among other things, Sanchez, a high-school history teacher in Philadelphia, is an acolyte of communist historian Howard Zinn, and he quotes Zinn extensively in his article. Moreover, he is an activist at the Zinn Education Project, a collective of Marxist educators/propagandists that popularizes Zinn’s pro-communist screed A People’s History of the United States. According to Sanchez, he and his comrades at the Zinn Education Project “have prepared the 10 lessons and materials in a new resource for educators, Teaching a People’s History of Abolition and the Civil War from which this article is excerpted.”

A word about the late Professor Zinn is in order here, since many readers will be unacquainted with his “illustrious” career and the disturbing significance of his prominent promotion in a major education publication. Like Alger Hiss, the Soviet spy and top-level agent-of-influence for mass-murder Joseph Stalin, Dr. Zinn adamantly, publicly denied being a member of the Communist Party USA (CPUSA). But, like Hiss and hundreds of other prominent communists, he was lying. Unfortunately for the Zinnophiles, their lying hero was exposed with the 2010 release of his FBI file in response to a Freedom of Information Act (FOIA) request from Accuracy in Academia’s Cliff Kinkaid. The entire 423-page file is available here  (Part 1) and here (Parts 2 and 3).

In his massive study of the pro-communist Hollywood celebrities, intellectuals, politicians, and journalists during the Vietnam War period, Dr. Roger Canfield gives considerable coverage to the treasonous activities of Professor Zinn. Like Jane Fonda, Bill Ayers, Tom Hayden, David Dellinger, and others, Zinn was not as much “anti-war” as he was “anti-American.” These “peaceniks” were actually agents for the Hanoi Lobby, working closely with the communist regimes in Soviet Russia, China, and North Vietnam.

In his extensively documented book Comrades in Arms: How the Ameri-Cong Won the Vietnam War Against the Common Enemy — America, Dr. Canfield mines the FBI files on Zinn, as well as vast archives of leftist and communist literature. Zinn was no mere liberal dupe, as were many of the other radical gadflies that traipsed off to Hanoi, Beijing, Moscow, Budapest, Havana, and other enemy capitols during the Vietnam War. Zinn was a ardent, hardened, enemy agent who did vast damage to America. And his legions of devotees in schools and colleges across our nation continue his toxic legacy. Zinn taught his Marxist-Leninist version of history at Boston University for a quarter of a century while also slavishly serving mass-murdering communist dictators.

Howard Zinn not only traveled about the United States, Europe, and Asia denouncing the United States, praising the communist Vietcong, and stirring up campus turmoil, he actually went to Hanoi to provide treasonous aid to the enemy during wartime. For one of his most perfidious actions, he was selected by Hanoi, along with Father Daniel Berrigan, the radical Catholic priest, to perform special propaganda service concerning America’s POWs.

On February 16, 1968 Berrigan and Zinn met [communist North Vietnam’s] Premier Pham Van Dong at his French villa and garden behind armored doors. Berrigan saw in the “face of this man…of whom complexity dwells … life and death … great intelligence, and yet also great reserves of compassion.” (Seven years later Dong’s mother saw no such compassion and fled her son’s invasion.)

According to Berrigan’s notes, Dong said, in part, “Your visit is of some importance…. We ask … that you clarify the meaning of war for your fellow Americans.” Dong said, “public opinion in your country is of the essence.” Further “we have a common front. We are in combat here, and you there.” Comrades in arms, they were on the same side.

The premier made clear that the war in Vietnam and in the United States were one and the same. “We must continue to coordinate our efforts…. We will be in touch with representatives of your movement … (in) future meetings … here or in another place, such as Bratislava [in then-communist Czechoslovakia].”

Additional articles in the Fall 2019 American Educator include “Developing Inclusive Youth How to Reduce Social Exclusion and Foster Equality and Equity in Childhood,” by Professor Melanie Killen;  “Race to Improve Teacher Education Building Awareness for Instructional Practice,” by Professor H. Richard Milner IV; “Engaging in Meaningful Conversations: The Need to Foster Ethnic-Racial Identity in School,” by Professors Deborah Rivas-Drake and Adriana J. Umaña-Taylor; “Responding to Anti-Muslim Bias a Q&A with Debbie Almontaser”; “AFT Resolution Opposition to Anti-Muslim Bigotry, Discrimination, and Violence”; “School Integration: How It Can Promote Social Cohesion and Combat Racism,” by Richard D. Kahlenberg, Halley Potter, and Kimberly Quick, all senior activists at the Century Foundation; “Demystifying the ‘Safe Space’: How to Lead Meaningful Race Conversations in the Classroom,” by Matthew R. Kay.

Unfortunately, the woke ideology that saturates this issue of American Educator is standard fare for the journal. The AFT, like its competitor, the National Education Association, never misses an opportunity to steep its members in political correctness and to turn our nation’s classrooms into ever more radical indoctrination chambers. Which is a major reason why, if we intend to save our children from the statist brainwashers, we must “Get Them Out (of Public Schools)!”, as Professor Duke Pesta and Alex Newman recently explained, in our special report Rescuing Our Children.

Radicalism 101: Why Do Our Universities Hire Terrorists as Professors?

Sick Schools: Six-year-olds to be Given Compulsory “Self-stimulation” Lessons