Thank God our Founders made us a Republic, NOT a Democracy! 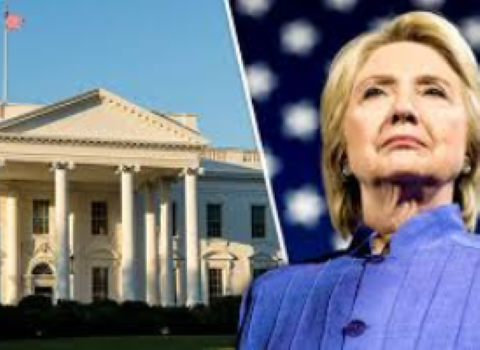 Thank God our Founders made us a Republic, NOT a Democracy!

Nothing is more frightening that the thought of what would be left of America had Hillary’s Crime Family won the election in our Electoral College.

If we were a true Democracy as most people and commentators constantly refer to us she would indeed be there stealing her way around and doing the becking of she and slick Willey’s buds in the deep state run by the Council on Foreign Relations (CFR) and the UN.

The Democrat Party is now irrelevant. The far left socialist crazies that have totally hijacked the once proud Democrat Party are so at loss for any meaningful purpose-in-being after the wretched Obama years of destruction that they are now proven to be absolutely baseless and devoid of any justifiable positions going forward due to their long list of disasters such as ObamaCare, TARP, Fast and Furious, Solyndra, the Syrian Red Line, Benghazi, Beau Bergdahl swap, Iranian nuclear deal, adding $10 Trillion in national debt and on and on…   It appears all they can do is try to impeach, impeach, impeach.  Again, they are underscoring their irrelevancy every day they go on with their tripe.

GIVE THANKS FOR OUR ELECTORAL COLLEGE

Patriotic Americans who voted and Donald Trump’s commitment to us are to be thanked. Especially, thank God for our founders’ wisdom in creating the Electoral College System lest the whole of America would be run by the population dense metropolises of the extreme left.

Those two far left coastal enclaves only represent a very small percentage of America but, in a true democracy’s popular vote only system, they would tip the vote in favor of America probably becoming a socialist, member state of a one-world government run by unaccountable, unelected global power elitists who know best about everything for everyone. Our freedom and sovereignty would be dissolved quickly.

We are blessed with our Republic and its Electoral College System where all the states have representation in voting instead of a democracy’s majority vote ruling. The map below makes the point that the few small geographical areas with dense populations of Hillary voters would have taken control of all the rest of the red area that voted for Trump. New York, coastal California and two or three other large Democrat controlled cities should not run and ruin the rest of America like they have destroyed their own enclaves. 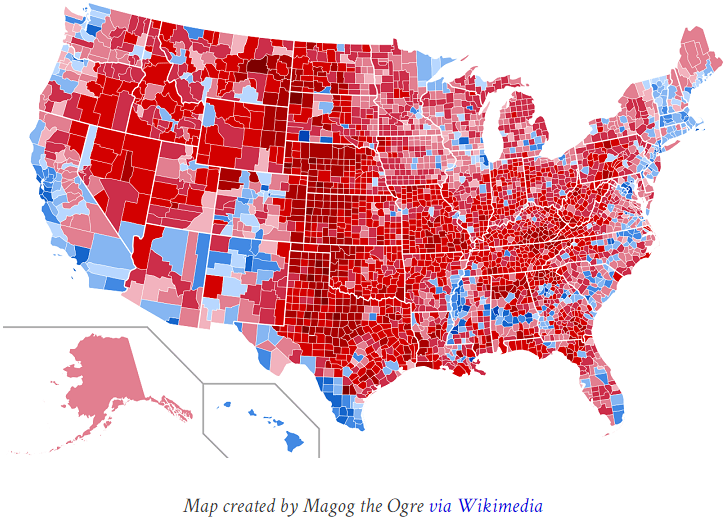 Now, all the left can do is all they can do to: disrupt, obstruct, boldly and loudly proclaim falsities supported by their duplicitous big media comrades generating Fake News and divert attention with hell raising in the streets charging racism and division by professionally trained and well-paid anarchist supported by the likes of George Soros. They are also supported by what I say could be considered Fake Polls. I haven’t believed polls for a very long time. Pollsters have data banks identifying results of previous polling and know pretty much what zip codes to get the kind of answers they wish. Also, it makes sense that many of these polling companies are the same outfits generating the Fake News supporting the lefty wackos. I trust none of them.  I suspect many of them just outright lie like their newsy comrades.

Yes, as much as I like Fox News, and even more, Fox Business News, even their polling could also be suspect, when you consider, as much as it pains me to report it, that their founder and current co-chairman, Rupert Murdoch is a member of the deceitful Council on Foreign Relations (CFR) which has been proven (in their own words) to really be the Establishment running their Congressional puppets in Washington, DC. For a few members like Murdoch, I would like to believe that they are following the old adage about keeping your friends close and your enemies closer. But, I am concerned about anybody’s membership in this mendacious Shadow of Power, especially members like Chief Trade Negotiator Robert E. Lighthizer and Dept. of Transportation Secretary Elaine Chow (who is Senate Leader Mitch McConnell’s wife).  See: review of the book Shadows of Power.

MANY GOOD DEMOCRATS ARE DELUDED

Extremists, far lefties like the ‘Schumer clowns’ and ‘Pelosi propagandists’ are despicable images for a political party’s ‘franchise players.’ The Democrat Party, much as some of the great people who were raised Democrats and want to remain loyal to what they always thought was the party of the people, because they were told so by their elders who were sold on the same by party officials, have always had a tough time acknowledging that the party touted socialist values. You know, socialist, like in the Communist Party’s concept. It was never in their face, socialism, but socialism subtly has always been present in all our Democrat Party regimes. Truth sounds like hate to those that hate the truth.

Socialism has never succeeded in all of history. True freedom’s Capitalism succeeds when government meddling stays out of it and lets free enterprise compete fairly. No subsidies, strangulating high taxes, unfair tax breaks, strangulating regulations and no picking winners and losers by applying any of the aforementioned.

SO DOES IT COME DOWN TO THE LEFTY CRAZIES OR THE SORRY RIGHT?

It comes down to the fact that they are both at fault.

There are plenty of reasons why President Trump needs to get on with his swamp draining and one of them is that the Republicans do about as lousy a job following their sworn oaths to our Constitution as the Democrats. However, the Republicans have a very good platform but they don’t follow it. The Republican Party, when it comes right down to it, again, are following the edicts of their leadership at the behest of the powerful ‘Establishment’ at the CFR along with their comrades at the United Nations. And so do the Democrats. Again, to be a believer of these last two statements read, ‘Who the ‘Establishment’ Really Is’ and read their verifying statements in their own words.

If the Republicans in Washington don’t want to be recognized as part of the problem they better find their backbones and start paying serious attention to following their oaths to our Constitution and get out of the Establishment’s and LOBBYI$T$’ world of influence. President Trump is re-awakening our citizenry to what America is really about and what brought us and to that end these sorrys in both parties must become aware that they are on notice.

CITIZENS’ NEED FOR A GUTCHECK WITH REALITY

There is absolutely nothing more harmful to Americans and our way of life than our own complacency and refusal to pay attention to how our elected officials vote on very important issues. That’s the simple truth about why we have the paltry state of affairs in our government that we do today. We are solely responsible for the government we have been getting because we have been too trusting, flat out un-involved and utterly clueless about how the Establishment and LOBBYI$T$ led folks we’ve elected do what they wish, which generally hasn’t had that much to do with what they should be doing for us by following our Constitution.

WHAT WE MUST DO!

There’s a very simple way of identifying which elected representatives need replacing in our Idaho statehouse and in Congress in Washington. You study The Freedom Indexes for both bodies which shows exactly how they vote with criteria in keeping with Federal and State Constitutions and then cull the bad ones at the voting box. Here in Idaho The Freedom Index is at IdahoFreedomIndex.com published by ‘The Idaho Freedom Foundation.’ Since the legislature is not currently in session, go over on the right side of the page and click on 2016 to see the most recent index completed.

For the U.S. Congress see The Freedom Index at The New American.com/freedom-index,  “A Congressional Scorecard Based on the U.S. Constitution,” rates congressmen based on their adherence to constitutional principles of limited government, fiscal responsibility, national sovereignty, and a traditional foreign policy of avoiding foreign entanglements. In this fourth and final 6 month session of the 115th Congress completed, abysmally our congressmen and senators in Washington, D.C. voted with the Constitution 27% of the time, (32% in the House and 22% in the Senate). So there you see now why we are where we are. 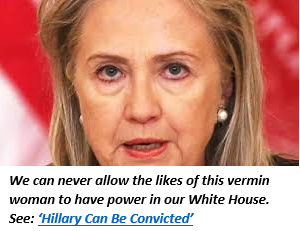 Don’t count on a thing politicians say, only believe what you see and judge them on how they vote! Then do your part in draining the swamp by culling them at the ballot box and replace them with Constitution following patriots that understand the importance of upholding the oaths they swear to when they are elected. And watch them closely.