Lindsey Graham Gets the Kurds and Syria Backwards 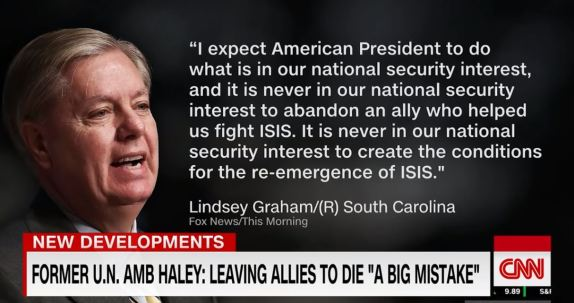 Lindsey Graham Gets the Kurds and Syria Backwards

“We can’t abandon the Kurds now,” said Senator Lindsey Graham during a recent appearance on Fox & Friends. “When Turkey goes into Syria, they’re not going in to fight ISIS. They’re going in to kill the Kurds because in their eyes they’re more of a threat to Turkey than ISIS,” the South Carolina Republican said on “Fox & Friends. According to reporting by William Cummings for USA TODAY Graham added that “every military person” has told Trump not to pull the troops out.

“We destroyed ISIS with the help of the Kurds,” Graham continued. “We can’t abandon the Kurds now. We can’t turn it over to Turkey. To think that will work is really delusional and dangerous.”

Senator Graham has a point about the government of Turkey’s enmity toward an independent Kurdistan and the danger a Turkish incursion poses to independence-minded Kurds, but he has it all backwards about the United States “abandoning” the Kurds.

It is apparently lost on Senator Graham that the Kurds live in a very dangerous neighborhood, with some really nasty neighbors: ISIS, the Iranians, Bashar al Assad and various Iraqi militia factions, to name a few of the nastiest.

When ISIS rose in the wake of Obama’s departure from Iraq and the so-called Arab Spring he and Hillary Clinton instigated, the Kurds were on the front lines of the fight not because we somehow suckered them into to taking our side, they were there fighting ISIS to preserve their culture, homes and lives.

In reality the Arab Spring was an Islamist uprising against secularism and it ushered in fairly successful civilization-level attack on the West by political Islam. The millions of Muslim “refugees” invading Western Europe and the United States and the spread of Iranian influence throughout the region were caused by the war in Syria, and we came to wipeout ISIS and in the process help the Kurds save themselves; it’s not like they flew halfway around the world to help us.

So, to the extent we remove U.S. troops from Kurdish areas of Syria we’re not “abandoning” them, we’re merely returning things to the status quo ante the rise of ISIS.

In truth the President’s analysis that the current state of affairs in Syria should be brought to its final conclusion by parties in direct proximity to the problem is nothing more than the sensible judgement that the heavy lifting in the fight against the Islamic State has already been done, and that the mopping up can and should be handled by Turkey, Saudi Arabia and Iraq.

However, there is a deeper truth that both the President and the opponents of the pullout are ignoring, because those who advocate keeping American troops endlessly engaged in the intramural Muslim conflicts that have animated the U.S. intervention in Syria refuse to acknowledge it exits, let alone that it should be confronted and defeated.

And that truth is that behind all the arguments about borders, self-determination for the Kurds and democratic principles lurks the dark shadow of Iranian political Islam and its drive for world domination.

And today, the most important mission U.S. troops in northern Syria and our Kurdish allies are conducting may have nothing to do with ISIS at all – it is acting as a blocking force to separate the Iranians from Hezbollah, their Islamist allies in Lebanon.

While neocons, such as Senator Graham, and Obama apologists, such as Susan Rice, want to keep Americans in Syria acting as human shields to separate Iran and Hezbollah, none of them have a clear vision of how to win a confrontation with Iran – or the stomach for the casualties it would involve.

The real enemy in the Near East is Iranian political Islam, and the only way to defeat it is to drop the fiction that “Islam is a religion of peace” and use all our national power to present an alternative worldview that undermines and eventually destroys Sharia-supremacism and Iranian “Absolute Wilayat al-Faqih” (Guardianship of the Jurist).

None of the generals who have been tasked with fighting and winning the wars in Syria and Iraq, and certainly none of the politicians who have advocated United States involvement in them, have been willing to accept and confront that truth, and as a consequence the war that was supposed to be a three month intervention to defeat the “JV forces” of the Islamic State became an eight year sinkhole of American lives and treasure.

The Kurds may very well be the largest ethnic group in the world without a self-governing homeland. Their fight against ISIS to defend their lives, homes and culture was epic, but creating a Kurdish homeland in parts of Syria, Iraq and Iran has never been a U.S. policy or commitment.

President Trump has a clear strategy of attacking Iran’s economy and destabilizing the Islamic Republic through economic sanctions which is vastly superior to anything his detractors have proposed, and he’s right to pull Americans out of harm’s way in northern Syria while he pursues it.

George Rasley is editor of Richard Viguerie’s ConservativeHQ.com and is a veteran of over 300 political campaigns. A member of American MENSA, he served on the staff of Vice President Dan Quayle, as Director of Policy and Communication for then-Congressman Adam Putnam (FL-12) then Vice Chairman of the Oversight and Government Reform Committee’s Subcommittee on National Security and Foreign Affairs, and as spokesman for Rep. Mac Thornberry former Chairman of the House Armed Services Committee.