Death Camps, Mass Starvation And Forced Obedience To Govt May Follow Open Borders, Free Health Care For Illegals & The Total Destruction Of The US Constitution If Democrats Win In 2020 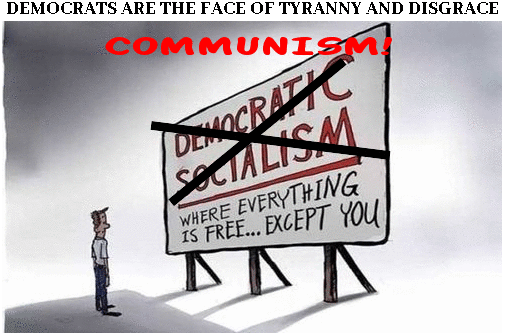 Death Camps, Mass Starvation And Forced Obedience To Govt May Follow Open Borders, Free Health Care For Illegals & The Total Destruction Of The US Constitution If Democrats Win In 2020

– If Democrats Aren’t Held Accountable For This Attempted Coup, America Is Dead And Gone

In the first video at the bottom of this story, Fox News Tucker Carlson devotes a segment of his ‘Tucker Carlson Tonight‘ show to describe what he believes America could easily look like in 2021 should Democrats win the 2020 presidency and we’ll tell you now, if Tucker is right, it won’t be pretty.

With what’s happening now in the state of New York where ‘truth‘ has been criminalized following the criminalization of ‘truth‘ in Europe where ‘truth is treason in their empire of lies‘, as this story over at AOL reports, New York City has passed a new law banning the use of the term “illegal alien” when used “with intent to demean, humiliate or harass a person” with fines of up to $250,000 for “each act“.

Also forbidding businesses and organizations from using English proficiency tests while also criminalizing businesses from calling ICE on someone they know is here in America illegally, New York claims they’re doing this because ‘hate has no place here‘, yet it’s still more than ok for New York governor Andrew Cuomo and Democrats to HATE President Trump and his ‘deplorable supporters’, proving the state of New York is talking out of both sides of its mouth.

And with it illegal to truthfully call the Islamic prophet Muhammad a ‘child molester‘ in Europe, with a European human rights court upholding a criminal conviction for an Austrian woman who disparaged the Islamic pedophile just more proof that freedom has fallen in Europe, if Democrats have their way and win the Presidency in 2020, does anybody believe they wouldn’t try to bring the same thing to America nationwide with the state of New York already leading the way?

Democrats calling for the criminalization of ‘hatred‘ should think about this; if President Trump were to criminalize ‘hatred‘ like many leftists are calling for, with this extreme example suggesting the tagging of ‘hatred‘ with ‘capital punishment‘ as the ‘punishment‘ for the crime, most leftists would be this very moment ripe to be rounded up and executed, right now, due to their bitter and unending hatred of President Trump, Christians and Conservatives. Think about that, lefty’s!

So we’ll be taking a look within the rest of this story below at that latest news involving this ‘deep state coup‘ attempt against President Trump and what Tucker Carlson has to say about what America might look like should Democrats win in 2020. And with the still ongoing coup attempt by the deep state/Democratic party/mainstream media apparatus giving tens of millions of Americans a reason to NEVER, EVER trust ‘government‘, or the ‘establishment media‘, ever again (WE haven’t for YEARS anyways!), we’ll take Tucker’s analogy a few steps further with ‘socialism‘ nearly always leading to ‘Communism‘ and ‘Communism‘ nearly always leading to forced obedience to government, death camps, famine and mass starvation. 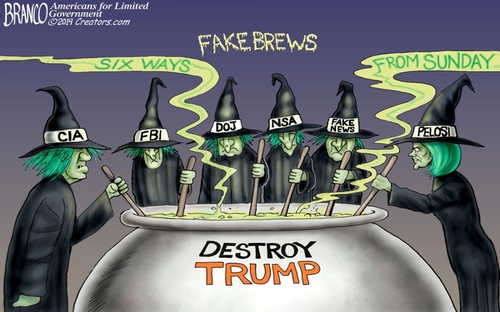 With the still ongoing coup attempt against President Trump designed and carried out by operatives within the Democratic party that could very easily lead right back to Barack Obama, Joe Biden and Hillary Clinton as was reported in this new Gateway Pundit story as also heard in the 2nd video at the bottom of this story, will Americans EVER be able to trust the US government again with the CIA, FBI, DOJ, NSA, the fake news networks and members of the Democratic party blatantly lying to the American people?

As we reported within this October 5th ANP story, with the timing of everything we’re now witnessing in America pointing at nothing less than the globalists preparing their ‘final take down‘ of America, and with Americans being lied to by the msm and numerous govt cabinets and officials for years about their plans to transform America into a fascist nation, it’s quite sad that Americans may never be able to trust ‘govt‘ again as far as we could throw them unless through some miracle we finally, after all these years, get some truth out of them about matters long censored and hidden.  The excerpt below from this Gateway Pundit story as also heard in that 2nd video at the bottom of this story reports that America may be in for a ‘bang bang‘ next couple of weeks.

The best half hour of TV in a decade occurred last night on Laura Ingraham’s “The Ingraham Angle”. Guests former mayor of New York and President Trump’s attorney, Rudy Giuliani, and former US Attorney Joe diGenova tore into the Democrat’s phony impeachment and then went to the heart of all the corruption in D.C. and they were brilliant.

Shortly before a break Laura’s guests shared the following.

Obama, Biden, Hillary and the Democrats should be very worried. Their corruption is trickling out now – diGenova believes it’s going to be a “Bang, Bang” couple of weeks.

Though we’ve long said that we won’t be holding our breaths until the deep state crooks do their ‘perp walk‘ and the criminals within government who’ve long been working to take down freedom and America are held accountable for their crimes of treason (for pushing globalism while neglecting America) and sedition (for their attempt to overthrow President Trump and the results of the 2016 election). 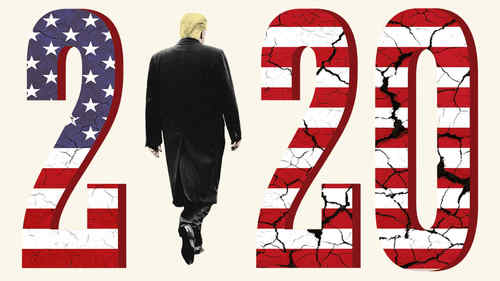 So we’ll take a look here at this October 8th Daily Caller story with Tucker Carlson making his own forecast about what he believes America might look like should a Democrat win in 2020 as heard in that 1st video below.

The segment featured clips of various Democratic 2020 presidential candidates and other prominent Democrats explaining their views on key issues from marijuana legalization to gun control to even the abolishment of prisons.

After a segment featuring Democratic views on drug legalization, Carlson set his sights on New York Rep. Alexandria Ocasio-Cortez, who this week tweeted her belief that prisons should eventually be abolished.

“Of course, there were no prisons before racists in America thought them up,” Carlson quipped. “So with no more prisons, presumably that will mean no more prisoners, right? So with all of those felons back on the street and in your neighborhood – hey, felons – you may suddenly be a little bit concerned about protecting yourself and your family, but tough. In Democratic America, self-defense will be banned because they are taking your guns.”

The Fox News host then played a clip of Democrats talking about taking so-called assault weapons.

“By the way, that’ll make home invasions a little tougher to deal with,” said Carlson. “Lots of luck with that. Let’s hope you don’t get assaulted and need to go to a hospital, because in Democratic America you might find the hospitals a bit overcrowded. Why? Well, the left is giving free health care to the rest of the planet.”

“Raise your hand if you don’t want a single normal person to even consider voting for you ever,” said the Fox News host. “Free health care for illegal aliens. That’s quite an idea. How’s our already broke country going into pay for that? Here’s a calculator. You figure it out. But don’t even think about heading to a bar to drown your sorrows with a cocktail, and a steak. In the America of tomorrow, that will be banned too.”

And as this must-read story over at I Am Not Ashamed Of The Gospel Of Christ reported in this story titled “The Days Are Evil, As Our Freedoms Are Stripped One By One“, the takeover of our Constitutional Republic by socialists, communists, leftists, and Islamists is also prophesied and while completely open borders and ‘free‘ healthcare for illegal immigrants financed by the American people might be coming should a Democrat win the presidency in 2020, things will only go rapidly downhill from there with Democrat-run cities all across America falling into mass poverty, homelessness and the spread of long believed ‘eradicated‘ 3rd world diseases their model for their transformation of America. From the Gospel story.:

The Last beast spoken of in Revelation and even Daniel is rising rapidly. The beast represents a one world government in control of every aspect of life. On this most scholars agree. The dangerous leftist Dems are threatening our economy, our health, our food system and even what we eat.

Pushing genetically modified food systems and replacing meat with plants. The high tax rates especially on the wealthy has been criticized by economists. The welfare state they want has also been criticized by economists, yet they push their agenda for complete control. Population control is at the top of their list. Without boring with facts and stats my research has shown economists agree that higher tax rates are a deterrent from businesses to strive for more, instead underperform to avoid the high tax rates.

We all remember the exodus of business when taxes were increased. And most agree that welfare nanny states discourage the population from improving themselves in order to keep benefits. I’m not as eloquent as the economists but you get the idea. It’s all about control, control, control and power. God has His own agenda. He controls the climate and its changes not man. Climate change is a hoax period. Unless your a humanist like the left. And without God or the Holy Spirit to guide to understanding of course they blame us for believing in Gods control and mock us at every turn, and even attack those exposing their propaganda.

The evil order is rising and will soon be in full force. Already in place are those evil tools from the “Rules for Radicals” (the holy book of the left),like Facebook and Twitter removing our freedom of speech.

So with the 2020 election already closing in though it’s still over 12 months away and the ‘radical far left‘ pushing America closer and closer to a system that nearly always brings forced obedience to government, famine, mass starvation, government roundups of ‘dissenters‘ and death camps, we can look at the policies they’re calling to implement now as warning signs of what’s ahead should one of them win in 2020. And with this still unfolding coup attempt as heard from former NSA head William Binney in the final video below proving Democrats could care less about the ‘rule of law‘ in America, our entire country is on the line in 2020. 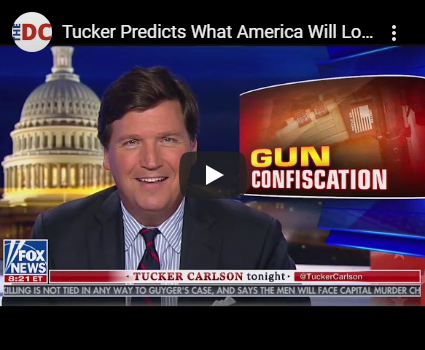 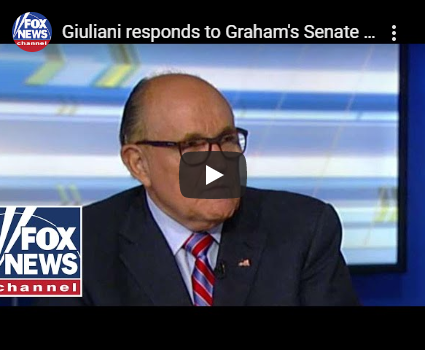 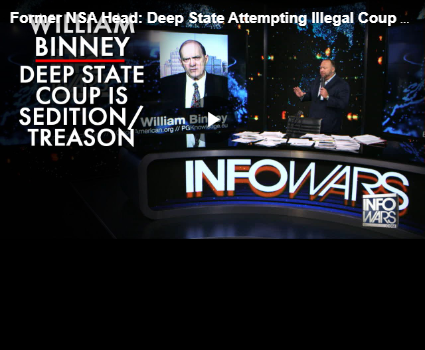 By Stefan Stanford – All News Pipeline – Live Free Or Die

Thanks to readers like you, ANP is still online and fighting hard for America’s future but if the globalists who’ve long been working to destroy our country had their way, we wouldn’t be here at all. So if you like stories like this, please consider donating to ANP.

All donations are greatly appreciated and will absolutely be used to keep us in this fight for the future of America. Thank you and may God Bless. Susan and Stefan.

PLEASE HELP KEEP ANP ALIVE BY DONATING USING ONE OF THE FOLLOWING METHODS.One time donations or monthly, via Paypal or Credit Card:

Donate monthly from $1 up by becoming an ANP Patron.

Checks or money orders made payable to Stefan Stanford or Susan Duclos can be sent to: