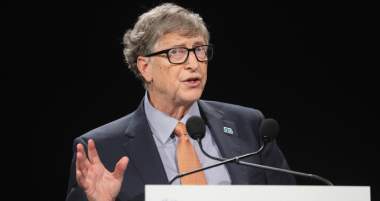 No one, it seems, was beyond the reach of deceased sex pervert and Wall Street financier Jeffrey Epstein, who was plugged into the Ruling Class and elites in both political parties and across the globe.

Prince Andrew was tight as a tick with the pervert until 2011, when Epstein threatened to sue Andrew’s wife, Sarah Ferguson, after she called him a pedophile.

But now, we learn, Microsoft billionaire Bill Gates, the second richest man in the world behind Amazon tycoon Jeff Bezos, met Epstein on multiple occasions. Gates flew on his jet and visited the sex pervert at his opulent townhome.

Like Epstein, who was under federal indictment for sex-trafficking when jail officials found him dead in his jail cell in New York on August 10, Gates’s wealth has wired him into the Deep State.

Gates gives billions to global philanthropy himself through his foundation, but he also cheerleads for expending tax money on foreign aid, and works with the Council on Foreign Relations. Thanks to his tremendous wealth, the college drop-out is now part of the global elite that calls the shots in world affairs.

After the Sex-crimes Conviction
Epstein will never pay for the crimes he committed against dozens of woman, but he was convicted in Florida 11 years ago. Prosecutors and Epstein inked a plea on misdemeanor child prostituion, which required him to register as a sex offender.

You’d think that would give someone in Gates’s position pause, but alas, it didn’t much matter to the Microsoft magnate.

“Unlike many others,” meaning the other Deep-State bigwigs who partied with Epstein, “Mr. Gates started the relationship after Mr. Epstein was convicted of sex crimes,” the New York Times reported on Saturday.

“I didn’t have any business relationship or friendship with him,” Gates told the Wall Street Journal. Not quite right, the Times discovered.

“In fact, beginning in 2011, Mr. Gates met with Mr. Epstein on numerous occasions — including at least three times at Mr. Epstein’s palatial Manhattan townhouse, and at least once staying late into the night, according to interviews with more than a dozen people familiar with the relationship, as well as documents reviewed by the New York Times,” the newspaper reported.

Employees of Mr. Gates’s foundation also paid multiple visits to Mr. Epstein’s mansion. And Mr. Epstein spoke with the Bill and Melinda Gates Foundation and JPMorgan Chase about a proposed multibillion-dollar charitable fund — an arrangement that had the potential to generate enormous fees for Mr. Epstein.

Gates had to have known, or at least should have known, Epstein was a convicted sex criminal, yet his spokesman told the Times the two met because “high-profile people” had introduced them.

The Meetings
Gates hobnobbed with other high-profile guests at Epstein’s lavish townhome on New York’s Upper East Side on January 31, 2011.

Gates and Epstein spoke privately at a TED conference in Long, Beach, California, and in May 2011, Gates returned to Epstein’s opulent mansion.

At about that time, the Times reported, Gates’s foundation and JPMorgan were collaborating to create the Global Health Investment Fund.

That’s when Epstein concocted a scheme to piggyback on that philanthropic endeavor to make millions for himself. Epstein would raise billions, even trillions, in a collateral health effort, then collect 0.3 percent.

At a meeting at his townhouse in 2011, Epstein told representatives from the Gates Foundation about his past, but not to worry. Soliciting prostitution from an underage girl, he told them, was like “stealing a bagel.”

Gate Foundation staff members who were unaware of Epstein’s sex conviction thought it might harm the outfit, yet a team from the foundation met Gates at his mansion again in 2012.

Gates mustn’t have worried at all. Because he and Epstein “kept seeing each other,” the Times reported. The Times uncovered at least one more meeting. In 2013, Gates flew on Epstein’s Gulfstream jet to Palm Beach, Florida, where Epstein kept another estate.

Gates stopped contact with Epstein in 2014, but foundation employees stayed in touch with the sex offender through 2017, well after the truth about him emerged.

The Gates-Epstein connection invites an obvious question. Gates, again, is plugged into the Deep State ruling elites who, through a constellation of globalist organizations such as the Council of Foreign Relations — for whom Melinda Gates spoke in 2008 — seek to gradually cede U.S. sovereignty to a global, borderless regime of trade and migration. The goal line is world government.

Just how deeply was Epstein tied into that network of elites, and who else among that group was a regular at Epstein’s home?