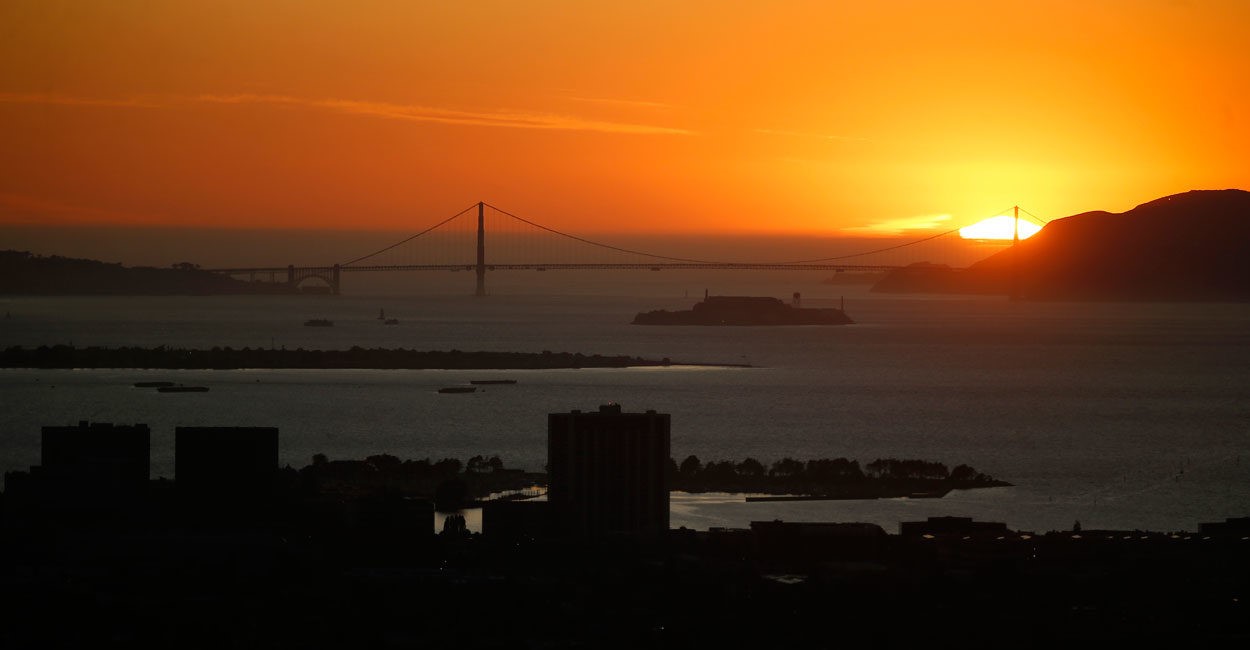 The sun sets over the Marin Headlands and Golden Gate Bridge in this view from Hiller Drive in Oakland, California, Oct. 9, 2019. This area was the scene of the 1991 Oakland Hills fire. (Photo: Jane Tyska/MediaNews Group/The Mercury News/Getty Images)

California, the richest state in the nation—and one that’s often portrayed as the progressive harbinger of the future for the rest of the country—has been hit with its latest Third World-style disaster.

On top of high poverty rates, skyrocketing homelessness, rising crime, and the return of medieval-sounding diseases, the state—specifically, the San Francisco Bay Area—has been hit with a mass blackout.

About 1 million people in one of the most densely populated parts of the country have had their power shut off by the utility company, Pacific Gas and Electric.

The local utility, PG&E, initiated the blackout in an effort to limit the potential for mass wildfires, which ravaged the state in 2018 and bankrupted the company. Exposed power lines and infrastructure make the likelihood of sparking fires much greater in places where there is ample dry fuel (more on that later). Still, the fires are back this year.

The blackout, which has hit cities throughout Northern California, is causing chaos: businesses have to shut down, people can’t go to work, and in some blacked-out areas, curfews have been put in place to prevent crime.

Much of the blame for the blackout has been hurled at the utility, with some even turning to vandalizing PG&E offices and shooting at its trucks.

Though it’s easy to criticize PG&E, which hardly looks good in this whole mess, there is a lot of blame to go around—and no, it doesn’t have anything to do with “climate change.”

Poor land management has been a major contributing factor to the uptick in massive wildfires in the West and around the country. California is particularly susceptible.

Fires need heat, and they need fuel. At certain times of the year in California, the state is hot as dry winds blow in from Nevada, a combustible environment for fire. That’s hardly a new situation in the Golden State.

Unfortunately, there’s now far more fuel in our forests that has built up over decades because of a change in forest management strategy.

Former California Assemblyman Chuck DeVore, who now lives in Texas, has done a great job of highlighting this issue and explaining how the blackout crisis was largely caused by politicians.

Renewable energy has been prioritized over reliable infrastructure, DeVore recently wrote in The Federalist, while there has been an uptick of vulnerable power lines to connect distant wind farms to urban centers.

PG&E shifted its priority to the overpriced renewables at the behest of politicians, The Wall Street Journal explained in an article aptly titled “California’s Dark Ages.”

For years, the utility skimped on safety upgrades and repairs while pumping billions into green energy and electric-car subsidies to please its overlords in Sacramento. Credit Suisse has estimated that long-term contracts with developers of renewables cost the utility $2.2 billion annually more than current market power rates.

Now, in large parts of California, if you want to keep the lights on during the blackouts, you better have a flashlight or a gas lamp. Twenty-first century green dreams have led to 19th-century realities.

Worse than the misguided green energy push and poor infrastructure, of course, has been the shifting forest management strategy—mostly the result of misguided environmentalist ideology—that turned large swaths of the state into a tinderbox.

“With a decline in the harvest came a decline in the allied efforts to clear brush, build and maintain access roads and firebreaks,” DeVore wrote in The Federalist. “This led inexorably to a decades’ long build-up in the fuel load. Federal funds set aside for increasingly unpopular forest-management efforts were instead shifted to fire-suppression expenses.”

One failure led to another as poor forest management has necessitated vastly increased budgets for putting out the fires, which will undoubtedly continue to be a threat.

Further, DeVore noted, these fires pose more danger to people than ever before as middle-class Californians flee the state’s expensive urban areas to the more affordable, but also more at-risk parts of the state.

So, the current blackouts are ultimately the result of short-term reality and long-term dysfunctional governance.

California is a wealthy state with vast natural advantages and near-limitless potential for growth. It’s why so many Americans have moved there over the past century.

Despite those attributes, California’s future success looks, well, a whole lot darker due to political dysfunction and the inability to address the growing problems facing the state.

Let us all hope that America’s future is a lot brighter than California’s.

Jarrett Stepman is a contributor to The Daily Signal and co-host of The Right Side of History podcast. Send an email to Jarrett. He is also the author of the soon-to-be released book, “The War on History: The Conspiracy to Rewrite America’s Past.”