Venezuela Given Seat on UN Human Rights Council — One More Reason to Get US Out! 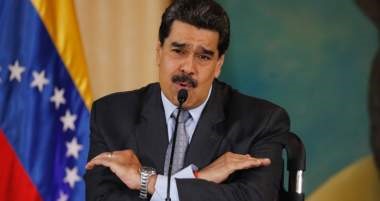 Venezuela Given Seat on UN Human Rights Council — One More Reason to Get US Out!

One-hundred five members voted to give Maduro’s socialist regime a seat among 46 other members on the Council.

This happened despite pressure from Human Rights Watch, which mounted a campaign to keep Venezuela from being given the seat. Two days prior to the vote, Louis Charbonneau, an official at the Human Rights Council, warned, “A vote for Venezuela is a vote for the torture, murder, and impunity that have become trademarks of President Nicolás Maduro’s government. It [would be] a slap in the face to the millions of who have fled the country, many [others] facing dire humanitarian conditions, and the countless victims who never made it out.” Added Charbonneau,

UN member states shouldn’t reward abusive governments with seats on important bodies like the Human Rights Council. No government is perfect, but Venezuela would clearly join the council with a view to protecting itself and its allies from legitimate criticism. When member states mark their ballots, they should make defeating Venezuela a priority.

Nevertheless, 105 UN members voted to give the renegade regime a seat at the table.

They voted despite a stinging report from the UN’s own Office of High Commissioner of Human Rights that was issued in July. The report stated that Maduro deliberately and intentionally implemented a strategy “aimed at neutralizing, repressing, and criminalizing political opponents and people critical of the government.”

They voted to give Venezuela a seat while ignoring the reasons why the Trump administration withdrew its own membership from the council last July. Said U.S. Ambassador to the UN Nikki Haley at the time:

Human rights abusers continue to serve on and be elected to the council. The world’s most inhumane regimes continue to escape scrutiny. And the council continues politicizing and scapegoating of countries with positive human rights records — in an attempt to distract from the abusers in their ranks….

We take this step because our commitment does not allow us to remain a part of a hypocritical and self-serving organization that makes a mockery of human rights.

Outrage over the vote was expressed by Secretary of State Mike Pompeo: “China and Russia voted to put Nicholas Maduro on the UNHRC… Maduro is purposely destroying the human rights of every Venezuelan.” Senator Rick Scott (R-Fla.) issued a statement decrying the vote:

Every freedom-loving country around the world should be horrified by the decision to give Venezuela a seat on the Human Rights Council. How can Nicolás Maduro, who is committing genocide, be allowed to participate in defending human rights? I’m glad so many opposed this decision but I am appalled at the nations that supported Maduro and his reign of terror. This just proves that more and more, the United Nations is a joke.

Representative Adam Kinzinger (R-Ill.) tweeted: “Venezuela now has a seat on the UN Human Rights Council??? The same Venezuela where Maduro is starving citizens & denying their basic human rights every single day? Did you give Kim Jong Un a seat, too? This is beyond outrageous.”

The vote even drew the ire of the Washington Post on Thursday. Wrote Francisco Toro: “Official U.N. rules call for the council to be made up of countries that ‘uphold the highest standards in the promotion and protection of human rights’ and ‘fully cooperate with the Council.’ Yet in the council, over the next three years, Venezuela will be joining other paragons of human rights rectitude such as Eritrea, Egypt, China, Saudi Arabia and Cuba.”

Current U.S. Ambassador to the UN Kelly Craft declared, “I am personally aggrieved that 105 countries voted in favor ot his affront to human life and dignity. It provides ironclad proof that the Human Rights Council is broken and reinforces why the United States withdrew.”

It also reinforces the argument made for decades by the John Birch Society that the United States should not only withdraw its financial support from the United Nations ($10 billion annually, or 22 percent of the organization’s $5.6 billion budget), but demand that the UN headquarters be removed from New York City.