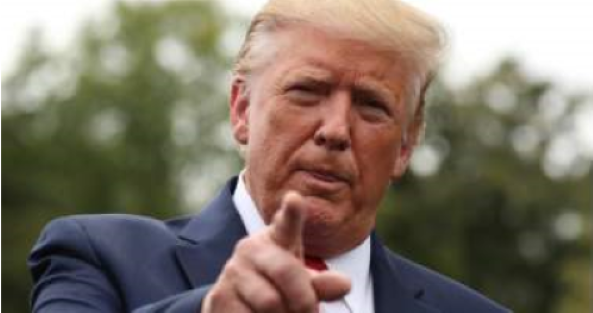 Facing a massive hole in its budget, the United Nations is implementing “emergency measures” to avoid missing payroll and other obligations before the end of the year. Unsurprisingly, UN bosses are demanding that taxpayers in America and other nations hand over more money now or face global catastrophe. Even UN officials and apologists, though, have blasted the “bloated” organization for squandering massive amounts of money on everything from luxurious air travel and fancy hotels to globalist propaganda promoting its own agenda. Trump reacted to the whining by calling on the UN to go look for money elsewhere.

According to the UN, one third of all “member states” are delinquent in paying their “dues” to the UN this year. That includes the United States, which funds between a fourth and a third of the UN’s overall budget, compared to Communist China’s meager 8 percent. In exchange, the regime in Beijing runs almost one third of all UN specialized agencies, while an American runs just one out of 15. State Department officials said the U.S. government would pay up at some point in the fall.

While the exact numbers are hard to pin down because so many federal agencies provide so many funding streams to the UN and its maze of bureaucracies — not to mention the “peacekeeping” — official estimates suggest the U.S. government sends well over $10 billion per year. American taxpayers pay more than 185 other UN member states, combined. And in return for all that money, the UN constantly attacks Americans’ liberties while praising and aiding mass-murdering regimes.

The official UN deficit is about a quarter of a billion dollars. In a letter addressed to the almost 40,000 bureaucrats based at the UN Secretariat, UN Secretary-General Antonio Guterres, a radical socialist, sounded the alarm about the numbers. “Member states have paid only 70 percent of the total amount needed for our regular budget operations in 2019,” he complained. “This translates into a cash shortage of $230 million at the end of September. We run the risk of depleting our backup liquidity reserves by the end of the month.” If the situation does not improve, the UN could default on salaries to employees and payments to vendors very soon.

But Trump was unmoved by the whining. “So make all Member Countries pay, not just the United States!” he fumed on Twitter in his typical style. Prior to that, speaking at the UN in New York City, Trump told “world leaders” last month that the UN needed to ensure that “no member state shoulders a disproportionate share of the burden.” As of right now, the General Assembly, which UN bosses such as then-Secretary-General Ban Ki Moon have dangerously characterized as the “Parliament of Humanity,” decides how much each government is expected to hand over from their citizens.

But Americans and their elected president are getting tired of shouldering an outlandish portion of the burden. On the campaign trail, for instance, Trump noted that the UN was not a friend to freedom or the United States. He has also repeatedly blasted globalism, most recently telling the UN General Assembly that the future did not belong to globalists, but to patriots. And the UN’s raison d’etre at the moment — the man-made global-warming hypothesis — was described by Trump as a “hoax” to benefit the dictatorship enslaving mainland China. And he won the election in an electoral college landslide.

Since his victory, Trump has dealt several major blows to the UN, even before this budget impasse. For instance, in 2017, the administration managed to get the UN budget slashed by a quarter of a billion dollars. That same year, Trump announced that the U.S. government was withdrawing from the UN Paris Agreement on “climate change.” He also withdrew from several key UN organs including UNESCO, the UN’s totalitarian-controlled “education” bureaucracy; and from the dictator-controlled UN “Human Rights Council,” which specializes in praising mass-murdering regimes while constantly attacking America and other nations that still enjoy some freedoms. Trump defunded a number of UN programs, agencies, and schemes, too.

As might be expected, the U.S. State Department used a more diplomatic tone to emphasize American reluctance to continue paying so much for the UN. “Overall the United States, as the largest contributor to the UN, contributes roughly $10 billion annually in assessed and voluntary contributions across the United Nations system,” a spokesman for the department was quoted as saying in media report. The Trump administration “has been very clear on its position that no one member state should pay more than one-quarter of the Organization’s budget,” the spokesman added.

Even before Trump was president, though, it was clear that there was growing bi-partisan outrage about the UN. In 2016, following a UN Security Council vote attacking Israel, leaders of both parties in Congress blasted the UN and threatened to withhold funding. Senate Minority Leader Chuck Schumer (D-N.Y.), for instance, blasted the global outfit for being “fervently anti-Israel.” And in previous Congresses, lawmakers have come very close to nixing funding for the globalist body.

Just the UN Secretariat alone has over 44,000 overpaid bureaucrats working for it, not including the tens of thousands of additional bureaucrats working at the 15 UN specialized agencies or the dizzying array of auxiliary UN outfits. Adding insult to injury, UN bureaucrats make enormous amounts of money, too, including $400 per day per diem while in New York. According to a 2012 report, there were 637 employees of the UN Development Program (UNDP) with over $1 million in their accounts. There were over 1,000 who had homes worth more than $1 million, too. Leaders at the UN pull down salaries and benefits that would boggle the mind.

Even UN officials see it. Former First Vice-President of the UN Staff Union Guy Candusso, who worked for the UN until retiring recently, slammed the global body. “Over the last 10 years, the UN has become a bloated organization, especially at the top,” he argued, adding that financial shortages in the 1990s were even worse but had somehow been solved. “If the cash crunch is considered so serious now, there should be a complete hiring freeze along with the other measures announced.”

Among the measures being taken by the UN to deal with the problem is an end to all “non-essential” travel. Why UN bureaucrats were flying around the world in luxury on “non-essential” travel paid for by taxpayer money was not made clear. Ironically, thanks partly to air travel, the UN’s carbon-dioxide footprint was larger than the entire population of some of its own member states, ranging from Malta to Liberia. Even UN officials have lambasted the globalist organization for using tax money so they can fly around the world in business class or even first class, while the people who pay their salaries sit in much smaller economy-class seats or struggle to even survive.

UN spokesperson Stéphane Dujarric urged member states to immediately pay up “to avoid a default that could risk disrupting operations globally.” But this has been a long time coming. UN boss Guterres, a socialist politician who has lived all his life feasting on the fruit of taxpayers’ labor, warned back in June that the UN was facing big money problems. “The solution lies not only in ensuring that all Member States pay in full and on time, but also in putting certain tools in place,” he warned the budget bosses at the UN’s Fifth Committee. “We are at a tipping point and what we do next will matter for years to come.” Apparently nobody listened, since the press is now acting surprised.

Calls for the UN to cut spending, or scale back its commitments, or quit paying exorbitant salaries to corrupt UN officials, are not wrong — but they seriously miss the point. Yes, the UN is bloated. Yes, it wastes outlandish amounts of the public’s money. But that is not the real problem. “The best thing that you can say about the United Nations is it’s mostly ineffective and a waste of money,” Representative Thomas Massie (R-Ky.), who has a bill to get the United States out of the UN, told The New American magazine. “That’s the best thing you can say about it. So I’m glad that they are somewhat ineffective, but I don’t like that we waste the money.”

But rather than making it more efficient, or less corrupt, Massie and other liberty-minded lawmakers say the time has come for the U.S. government to completely ditch the UN and remove its headquarters from U.S. soil. “It’s full of dictators, and it’s also something that I don’t think our sovereign government should defer to,” Massie explained. The bill, known as the American Sovereignty Restoration Act (H.R. 204), would sever all U.S. ties and funding to the UN while evicting it from New York. The legislation is currently in the House Foreign Affairs Committee, where Democrats hope to keep it bottled up. But if they lose control of the House at the next election, an “Amexit” from the UN may well end up on the agenda. 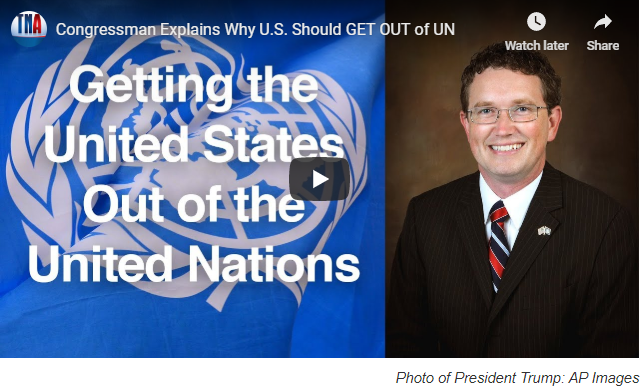 Alex Newman is a foreign correspondent for The New American. He can be reached at anewman@thenewamerican.com or through Liberty Sentinel Media. Follow him on Twitter @ALEXNEWMAN_JOU or on Facebook.

After Equating Trump with ISIS, UN Freaks Out Over His Victory

UN Child-abuse Whistleblower Skeptical That Ethics Can Return to UN