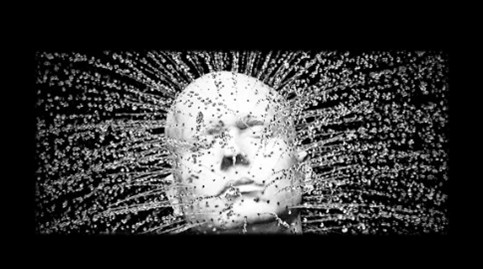 On September 24, 2019, there was a public meeting being hosted by the Public Health division of the Idaho Department of Health and Welfare to receive comments on the issue of changing sex on Certificates of Live Birth – changing history as it were.

In April of 2017, a case was filed (1:17-cv-00170-CWD) in the United States District Court for the District of Idaho against the Idaho Department of Public Affairs, the Administrator of the Division of Public Health and the State Registrar and Chief of the Bureau of Vital Records and Health Statistics asking for Declaratory and Injunctive Relief from the states’ refusal to change sex on the birth certificate. The Plaintiff in the case was a transgender who wanted his birth certificate to reflect that he was female at birth.

In the first paragraph of the plaintiff’s Background on the case, the attorney states the following referring to the State of Idaho:

The government has conceded in this litigation that it lacks even a rational basis for refusing to provide such birth certificates.  On that basis alone, Plaintiffs are entitled to summary judgment.

What that says is that the Idaho state attorney assigned to the case didn’t give a lot of thought to the issue.  He just surrendered.  He didn’t consider the significance of the birth certificate nor did he consider the ramifications throughout the entire U.S. system of record keeping in both public and private settings of changing a physical characteristic of birth on the birth certificate.

The proponents of this change would like to simply focus on the birth certificate as a piece of paper but the certificate is not just a piece of paper.  It is an identity document, the elements of which are recorded in nearly every computer system in this country.

Presumably the majority of people requesting a change of sex on the birth certificate are adults. The problem with that is that an adult accumulates computerized histories throughout their lifetime – military records, police records, credit histories, school records, medical records, etc. The list goes on and on. It’s safe to say that all of those records include identifying characteristics and that means they include an indicator of sex. A midlife change in sex creates a mismatch in all of those records. The cost of fixing all of those systems to accommodate a sex change in the paper work boggles the mind. It would be in the billions and might even reach a trillion dollars or more.

The alternative is to eliminate sex as a significant characteristic but that has even greater impact. Consider the ramifications of no difference between male and female. All we have then are humanoids. Think of prisons – no difference between male and female. The next inmate gets the next available bed in the next available cell. The same applies to military barracks.

The judge that made this decision to force Idaho to change the sex on birth certificates based on no contest from Idaho officials was not just legislating from the bench. She was dictating science from the bench because the decision constitutes a denial of a biological truth – that there is a difference between men and women.

The consequences of a denial of a biological truth are of such magnitude as to be almost incomprehensible. The fact that the attorney who represented the State of Idaho and its citizens conceded the case without contest from the beginning says that there is something else at issue. It could be that the Idaho attorney didn’t want to be involved in a 21st century Scope’s monkey trial but it could also be something more than that.

Coincidentally, my driver’s license expires this month so I got a card in the mail from the Idaho Department of Transportation reminding me to renew it. There is a significant change in the law. Within the United States, people will no longer be free to travel by public conveyance unless they have an internal passport – Real ID. 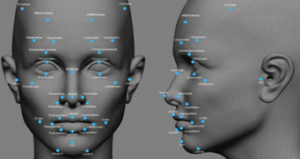 To get a Real ID which they are calling a Star Card, one must present a birth certificate. I already knew that Idaho no longer maintains their own vital statistics records from an incident about seven years ago when I needed a copy of another birth certificate. I drove to Boise to get it but found out that they are no longer able to provide same day service for a vital statistics records. I was told I had to apply for it online. The name of the website where the application is made is called VitalChek. VitalChek is a DBA name of LexisNexis Risk Solutions Company.

Because of the requirement for the internal passport, I clicked on the link provided to go to the VitalChek website where I could order a certified copy of my birth certificate so that I could fly if necessary.

After going through the process of entering all of the significant data – mother’s maiden name, father’s name, place and date of birth, etc. a screen came up asking me to select gender. I was so focused on the gender dropdown box, I actually didn’t read the instructions. I just filled in the blanks. It wouldn’t have crossed my mind in a million years that they would allow me to change the gender or the name on my birth certificate but as I read the screen print now, I’m horrified at the thought that the birth certificate I ordered will come with the name I entered (my current name) and not my birth name. 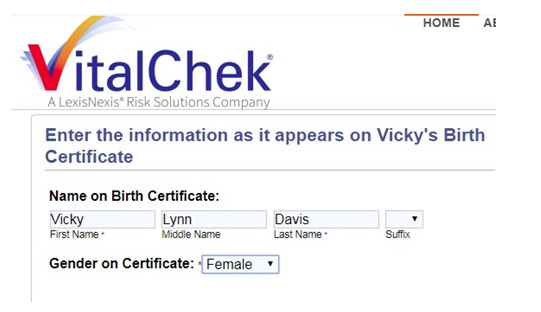 That’s probably the reason they asked me a series of security questions including where I’ve lived and done business in the past giving me options to select one choice. There were four or five questions one of which was very disturbing to me. It gave me a list of places to select one where I had never been – but included in the list were place I had been. One of those places was Indian River, Florida. I was in Indian River for a couple of months staying with a friend. While there, I didn’t do any transactions that would cause a paper trail. I did however spend about a week in the hospital. What that means is that VitalChek has access to hospital records. That’s a very disturbing thought so I decided I needed to find out about this company – who they are, where they are, who owns them. 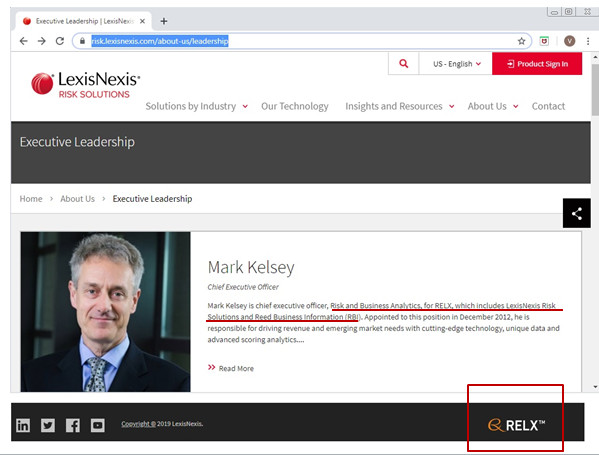 RELX is a global provider of information-based analytics and decision tools for professional and business customers. They have customers in 180 countries and offices in 40 countries. Notice the matching logos.

Using the ticker symbol RELX, I looked up the company on the Securities and Exchange Commission website and found that the legal name of the company is currently RELX PLC and that it is a British company with a history of name changes and different registration locations.

The LexisNexis website gives the impression that it’s an American company with an affiliate in the UK which is deceptive to say the least.

And on the VitalChek website, we find out that apparently all 50 states have turned over their vital statistics functions to this London based data collection and analytics corporation. 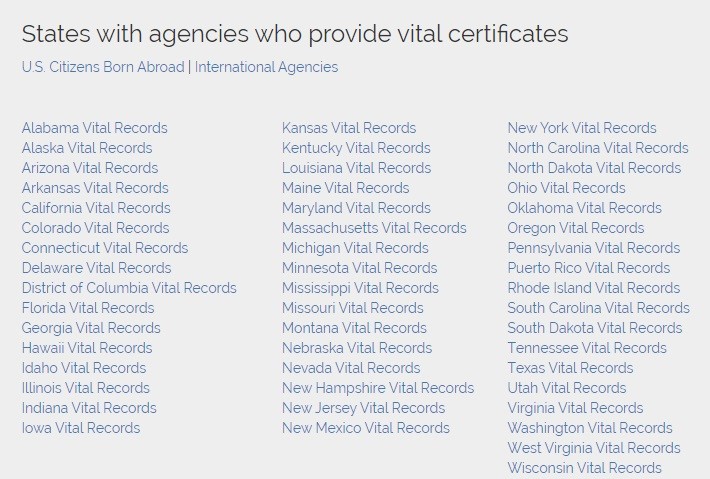 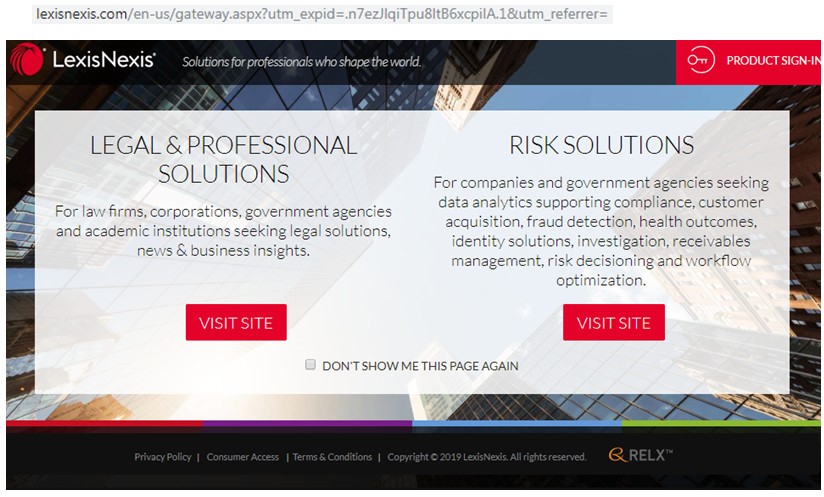 What all of this means so far, is that the state of Idaho contracted with a foreign, private sector information services company to keep and maintain our vital statistics records. The real business of this company is collecting and selling information and analytics that they gather from all sources. The lawsuit that was filed was a ‘sue and settle’ ploy to avoid the legislative process and the potential push back from the public about the falsification of legal documents – falsified by allowing gender selection. The corrupted birth sex – male or female corrupts all records across the entire nation. By doing that, they created the requirement for Real ID which is an application of Total Information Awareness – the ultimate police state system.

This is the original logo for the Total Information Awareness system. They changed it because of the public outcry when information about the system started to surface. 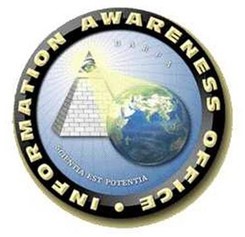 Total Information Awareness was a system conceived and designed by DARPA. In 2003, the Congress held hearings on the TIA project and they eliminated funding for it. I wrote about the TIA system and posted it to my old website:

My guess would be that DARPA privatized the system through a private sector spin-off start up and ultimately registered the parent company in the City of London because they were violating every tenet of the U.S. Constitution and the historical and cultural American traditions and values.

One final thing in this Pandora’s box, going back to the RELX website, under Social Responsibility we find that RELX is working with the United Nations: 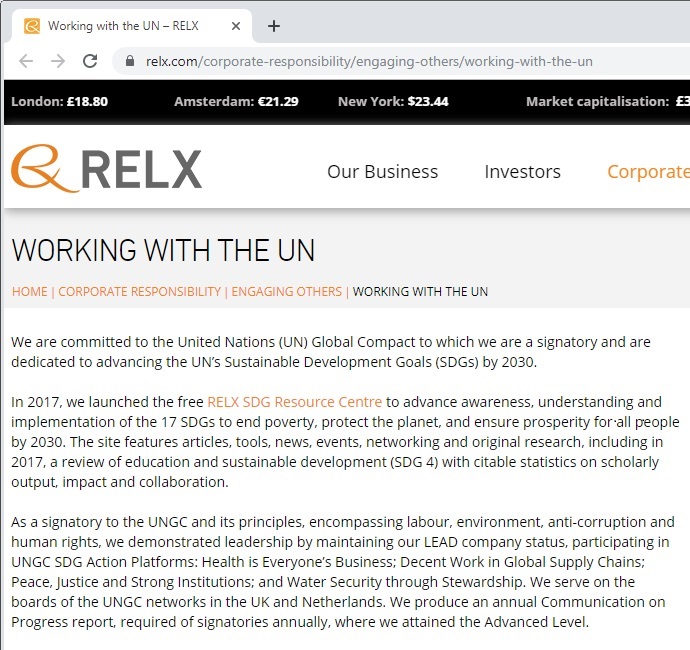