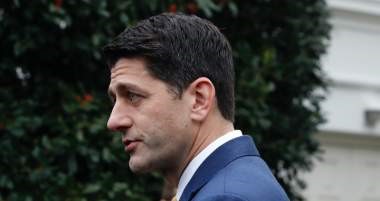 Former Republican House Speaker Paul Ryan (shown), who sits on the board of Fox Corp., is advising Fox News to “decisively break” with President Donald Trump as House Democrats proceed with an impeachment inquiry.

Ryan, whose support for amnesty and free trade always placed him at odds with the Trump agenda, joined the board of Fox Corp., which owns Fox News, back in March.

“Paul is embarrassed about Trump and now he has the power to do something about it,” an executive who spoke with Ryan told Vanity Fair’s Gabriel Sherman.

Ryan, who was Mitt Romney’s running mate in the 2012 election before becoming Speaker in 2015, said he saw his retirement from office last year as an “escape hatch” from President Trump. And in his book, Ryan wrote that he wanted to “scold [the president] all the time” because he “didn’t know anything about government.”

After the leak of the Access Hollywood tape during the 2016 election, Ryan told House Republicans he would not defend Donald Trump:

There are basically two things that I want to make really clear, as for myself as your Speaker. I am not going to defend Donald Trump — not now, not in the future. As you probably heard, I disinvited him from my first congressional district GOP event this weekend — a thing I do every year. And I’m not going to be campaigning with him over the next 30 days.

This comes as Fox Corp. CEO Lachlan Murdoch, who has wanted to move Fox to the center, has reportedly been holding strategy conversations about how the network should move into a post-Trump world.

The impeachment issue has deepened the schism between Trump supporters and Trump skeptics at Fox News.

That night, Carlson had as a guest former Trump lawyer Joe DiGenova, who called Napolitano a “fool.” In response, Smith called Carlson “repugnant” for not defending Napolitano.

According to a source, Fox News CEO Suzanne Scott and president Jay Wallace ultimately intervened, telling Smith he would be “off the air” if he did not stop attacking Carlson.

The whistleblower whose complaint sparked the impeachment inquiry claimed that President Trump threatened to withhold military aid to Ukraine if the country’s president did not cooperate in investigating Hunter and Joe Biden.

But a transcript of the “smoking gun” Trump-Zelensky phone call revealed that the president never made such a threat. Zelensky himself has said that “nobody pushed me.”

“The other thing, there’s a lot of talk about Biden’s son, that Biden stopped the prosecution and a lot of people want to find out about that so whatever you can do with the Attorney General would be great. Biden went around bragging that he stopped the prosecution so if you can look into it…. It sounds horrible to me,” President Trump said during the call.

In response to the released transcript, the anonymous whistleblower has alleged a White House “coverup.” House Democrats are continuing their probe of the president.

President Trump’s personal lawyer, former New York Mayor Rudy Giuliani, has been signaled by Democrats as someone they would like to hear from. During the July call with Zelensky, the president requested that the Ukrainian leader also work with Giuliani in looking into the Biden question.

“Rudy may be the best source of information, because he doesn’t know what he shouldn’t say,” Rep. Mike Quigley (D-Ill.), who sits on the House Intelligence Committee, told CNN.

But Giuliani has said he would not testify before the House without consulting the president, arguing his work with President Trump should be protected by attorney-client privilege.

“Ultimately, if I were to say yes and he were to say no, I can’t testify,” Giuliani stated. Asked by CNN if he was concerned about a subpoena, he answered, “I consider them a joke. A sad joke. They have no legitimacy. I would think of challenging their subpoena on the grounds that they’re not a legitimate committee.”