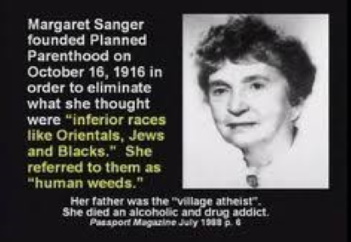 William Shakespeare’s “Song of the Witches” contains a memorable line that reminds me of Planned Parenthood’s latest actions. The line “Double, double, toil and trouble; fire burn and cauldron bubble” defines in a sense all that Planned Parenthood is about.

The essence of PP’s efforts is to spread evil; it has always been so. But sometimes its plans and programs boil over, scalding our children, our sense of justice, and the culture itself.

So why did Planned Parenthood build this enormous structure secretly? It wanted to avoid pro-life protesters! Got that?

Colleen McNicholas, chief medical officer of Planned Parenthood of the St. Louis Region and Southwest Missouri, discussed this reasoning with the media. It is important to note that she is also one of those physicians who wants the public to see abortion as a “healthcare issue” rather than as the act of killing it actually is. With doctors like her, is it any wonder that so many babies die?

In Minnesota, parents and students are protesting the possible passage of a legislative initiative that would insert Planned Parenthood’s Comprehensive Sex Education into every pre-K through grade 12 public or charter school curriculum. The proposed law, which addresses sexual health education, is a gateway for Planned Parenthood to spread its vile “trouble” to unwitting children as young as five years of age! It’s that toil and trouble thing again – poison for minds and deadly for the souls of Minnesota youth.

Alpha News Minnesota reported that the bill is tied to Planned Parenthood, noting:

Not only is PP the creator of CSE, they actively promote it, endorse books and curriculum that teach it, provide CSE training in schools wherever they’re allowed in, and lobby for it at legislatures and school districts across the nation. Children as young as kindergarten are taught that gender is “assigned at birth.” CSE 4th grade “age appropriate” materials are so graphic and morally reprehensible, even the adults won’t read them aloud.

But this video clip shows Rep. Eric Lucero doing just that on the floor of the House, reading straight from the PP-promoted CSE book It’s Perfectly Normal. In just two days this clip went viral, accumulating over 300,000 views as of this writing.

“Double, double, toil and trouble.” Children have been targeted by the witchy projects of Planned Parenthood for years.

And of course Planned Parenthood is also working hard to control the multi-billion dollar birth control industry with its own style of marketing these deadly chemicals and devices. STOPP International’s Jim Sedlak explained that, because Planned Parenthood’s facility numbers are on the decline, despite its mega-clinic in Illinois, it is working to lead patients to its business by way of an app called Planned Parenthood Direct. PP’s website states that the app user can locate birth control and urinary tract infection treatment simply by using it. But wait!

Sedlak lays out the multiple layers in this Planned Parenthood scheme, telling us that the app represents “Planned Parenthood’s first effort to begin to get a major position in the birth control industry in the United States” – an industry estimated to be $7.6 billion and growing!

So now the cauldron is really boiling – boiling over with the bodies of dead babies because the pill, as well as other chemical so-called contraceptives, can kill babies during their first week of life!

Planned Parenthood’s actions, programs, and services represent the ultimate example of evil, but this evil will not have the last word.

During times like this, we must remember the profound words that St. John Paul II spoke shortly after the events of September 11, 2001: “Christ’s word is the only one that can give a response to the questions which trouble our spirit. Even if the forces of darkness appear to prevail, those who believe in God know that evil and death do not have the final say. Christian hope is based on this truth; at this time our prayerful trust draws strength from it.”

Let us spread this hope; let us empty the Planned Parenthood cauldron once and for all with the truth of Christ’s love and mercy.