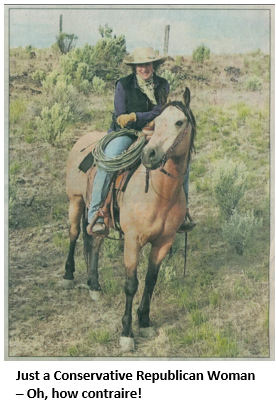 While helping a friend throw out a lot of rags we came upon a June 23 copy of  the Cd’A Press with a photo of Jennifer Ellis mounted on a horse in an article titled ”‘GOP factions fight over who’s ‘right’” in which she attacks real Republicans as extremists and labels them ‘alt-right.’  It begged to be read.

Sorry Jennifer but there is no Alt-Right.  There is just right or in other words there are just Republicans.  And then there are RINOs, which is obviously where you live.

Your Alt-Right charges are downright scurrilous.  A Republican is a party member that follows their great GOP platform, the Idaho State Constitution and the US Constitution.  Well-meaning coddling programs ‘for the people’ are the stuff of Democrats who are all about ‘social’ programs especially ones ‘for the children.’  You clearly need to saddle up in another arena Jennifer.  Nice horse and rope.

The new brood of Democrat zealots drumming up the Socialism agenda are absolutely crazy and they would already have outwardly destroyed their own party were it not for their supportive comrades in the ‘fake news’ media led by the deep state.  I really don’t believe most voting Americans are as worried as they should be about your ilk, because nothing hurts more than betrayal, such as RINOs betraying their oaths.

Why don’t you tell us what is wrong with the GOP platform or our Constitutions and what your conservative differences are?  Again, a true Republican is one that follows their oath to these documents.  It appears that your inserting the word Conservative in front of Republican is supposed to add strength or meaning, when none is needed.

Your applying the words Alt-Right to identify real Republicans leaves one to understand that your description of your “Conservative” comrades is actually using a moniker that is an autoantonym i.e. the exact opposite of the meaning you would expect for the word conservative.  Using the adjective Conservative does not make a Republican a stronger Republican and using it for what are actually RINOs is blasphemous.

Having studied voting indexes for the whole state, I know that calling yourself a conservative merely because you voted for people with R’s after their name very probably has meant in most of South Idaho that you voted for RINOs not real oath keeping Republicans.  Your credentials are lacking.

True we should all care about our citizens, their children and all other things.  But the caring is done at the levels of the individual and local levels to be taken up at the state level according to the state Constitution and state laws.  We are a nation of 50 states with state’s rights.  Governments have limited responsibilities and should not be manipulated by politicians for citizens for other purposes.

A true Republican is just an oath keeping Republican, not Alt-Right, honey.

You have all the appearances of a deep state, NeverTrumper infiltrator of the Republican Party.  I think, as a true Republican, you are a fraud, you are a true RINO.  Get off the stage, back in your saddle and ride into the sunset.