What CFACT saw at the NYC climate march 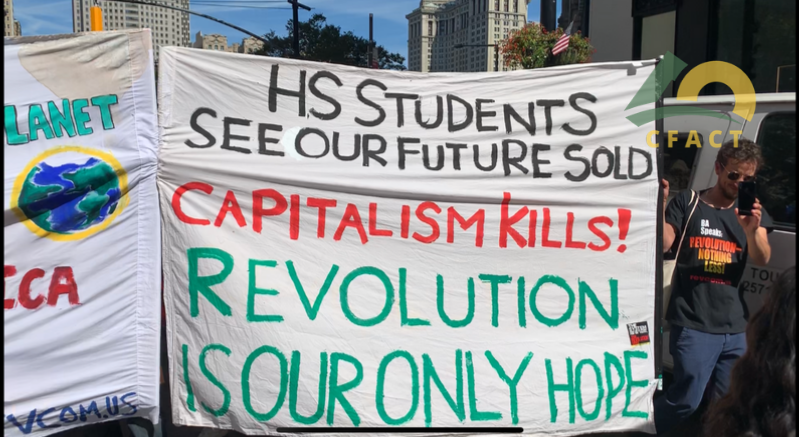 What CFACT saw at the NYC climate march

Around 100,000 people turned out in a highly publicized “Youth Climate Strike” yesterday in New York City. Not unexpectedly, throngs of media were on hand to champion the politically correct event. This time, however, they weren’t alone — CFACT activists were also present to hold their feet to the fire.

While the story bandied about by the mainstream media was that the protest was “student-led,” the truth of the matter was a bit different.

In reality, many people were neither young, nor students. Of course, there were lots of young faces to be sure — but these were equally matched (if not outnumbered) by multitudes of seasoned adults. Indeed, a good many could pass themselves easily off as “grandparents,” more so than “parents,” of these kids.

That aside, the tenor of the march also seemed to be, well frankly, kind of ho-hum. Whereas in the past climate activists came to these rallies highly energized and edgy (that’s what CFACT saw in Washington and Copenhagen), this time around they seemed more likely finding an excuse to take a day off school … or for others, work.

That is not to say there weren’t those who had a little spunk — especially toward Donald Trump, the GOP, and capitalism. Signs sporting such things as “Destroy Capitalism or else Destroy the Planet” and “F#@* Trump and Save the Earth” were splattered here and there about the crowd.

We’ve posted several of our favorites online, which you can see at CFACT.org. In New York terms, however, the crowd energy was so-so — resembling more of a day at the Department of Motor Vehicles than a game at Yankee stadium.

Our CFACT team, however, wasn’t quite as humdrum. Upon arriving at the scene, we split up and worked the crowd, gathered photos, interviewed protestors, and collected information to share with the media and public. Some of this information is being made available to outlets like Fox News for upcoming broadcasts.

Our Collegians staff also produced an engaging video where they asked the marchers to explain what they thought the public should give up to tackle so-called global warming … the answers, to say the least, were eye-opening.  You can watch that video here.

This weekend world leaders will be flying into the Big Apple to prepare for the UN Climate Action summit. UN Secretary-General António Guterres is asking leaders, from government, business and civil society, to come to arrive here with big plans to address the global climate emergency.

What these proposals are precisely, one can only speculate.  CFACT’s Marc Morano will be covering events in New York as they unfold.

Expect to hear more from him about these dangerous developments next week.