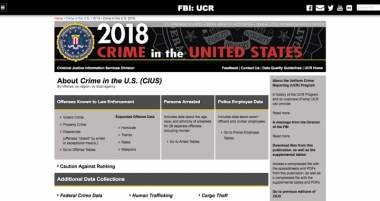 When the FBI released its 2018 Crime Statistics on Monday, the silence from the anti-gun, anti-Second Amendment mainstream media was deafening. The Washington Post and the New York Times gave the report short shrift, while the Wall Street Journal ignored it altogether.

According to the FBI, exactly the opposite is happening, and has been happening for years: The number of violent crimes committed in the United States continues to drop. Said the report, “In 2018, violent crime was down 3.3 percent from the 2017 number. Property crimes also dropped 6.3 percent, marking the 16th consecutive year [that] these offenses declined.”

The Washington Post skimmed the headlines in its short coverage, reluctantly adding that “even in 2015 and 2016 crime remained at historical lows” while the New York Times admitted in its brief coverage that “the decline in overall crime continues a decade-long trend.”

The only effort to discredit the FBI’s report came from left-wing Gizmodo, which called it “historically problematic,” adding that “the FBI’s figures have long suffered from inaccuracies stemming not only from its flawed collection process but also its internal methodology.”

Alan Gottlieb, head of the Citizens Committee for the Right to Keep and Bear Arms (CCRKBA), asked his members rhetorically, “What ‘gun violence’ epidemic are you talking about?” adding,

The number of murders has gone down. Yet, in order to create the impression that this country is awash in violent crime, gun grabbers routinely combine the number of homicides and suicides, plus accidental deaths and call them all acts of so-called “gun violence.” It is deliberately misleading and downright dishonest….

It is important to note that last year, according to the new FBI data, only 297 murders are known to have been committed with rifles of any kind, yet Democrats, including all of those now running for president, want to ban modern semiautomatic sporting rifles, which they repeatedly mischaracterize as “weapons of war.” Millions of honest citizens own such firearms, and they have harmed nobody.

The clear lack of coverage by the media may be called a “bias of silence,” in that only stories that promote or support the anti-gun agenda appear robustly and repeatedly. Skeptical readers of the New York Times have long believed that its masthead claim that “All the News That’s Fit to Print” appears on its pages is grossly inadequate. They declare instead that its claim should be “All the News That Fits,” while the news that doesn’t fit remains underreported or unreported.