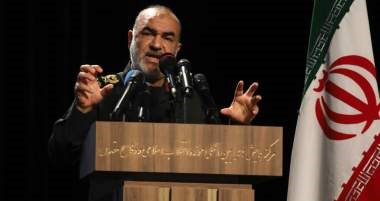 “This sinister regime must be wiped off the map and this is no longer … a dream, it is an achievable goal,” Major General Hossein Salami (shown), the commander of Iran’s Revolutionary Guard said Monday, according to the Sepah news site of the Guard.

Salami boasted that recent technological advances by Iran have now made it possible to bring an end to the state of Israel. “We have managed to obtain the capacity to destroy the imposter Zionist regime,” Salami insisted in his remarks.

While the Jewish nation was universally condemned by its neighboring Arab states (who promised to drive the nation and its people into the sea) upon the declaration of the restoration of the nation of Israel on May 14, 1948, Iran’s relationship with the Israeli government has had a more mixed history. During the years that the Shah ruled Iran, and Iran was actually an ally of the United States during the Cold War against the Soviet Union, Israel had little to fear from Iran.

Even after the 1979 Iranian Revolution that ousted the Shah and brought the ayatollahs to power in the country, Iran’s more immediate concern was the Saddam Hussein-ruled neighboring Iraq. The two nations fought a long war in which an estimated one million casualties resulted. In the early 1980s, under the Reagan administration, Iran and the United States reached a deal in which the United States actually sold weapons to the Iranians. Technically, Israel actually transferred the weapons to Iran, and the U.S. replenished the Israeli stock.

It is hard to imagine such cooperation between the present Iranian regime and the Israelis today. For the past several years, Iran has openly supported anti-Israeli terrorist groups such as Palestinian Hamas and Lebanon’s Hezbollah. And it is not just opposition to a Jewish state, as we often hear from apologists for the Iranian regime. Since the Iranian revolution, Jews in Iran have suffered persistent persecution. Before the revolution there were nearly 100,000 Jews in Iran — now there are only a few thousand left.

But, considering that Egypt’s Anwar Sadat, while a leading minister for Gamal Nasser, actually published an open letter to Adolf Hitler after World War II (hoping the National Socialist dictator was still alive somewhere), expressing sympathy for his efforts to exterminate the Jews, things can change. Sadat later reached the Camp David peace accords with Israel.

Whether an Iranian leader in the future could do a similar about-face is doubtful, especially considering that Sadat was assassinated for making peace with Israel.

But who would have thought that the Israelis and the Saudis would have such an informal alliance today against Iran?

Interestingly, Abbas Mousavi, speaking for the Iranian foreign ministry, actually tweeted a “Happy [Jewish] Year to our Jewish compatriots and to all true followers of great prophet Moses,” adding PBUH, an acronym for “Peace be upon him.”

Israeli Prime Minister Benjamin Netanyahu certainly regards Iran as a serious threat to the continued survival of his country, saying, “Iran calls for Israel’s destruction and they work for its destruction each day, every day, relentlessly.” Netanyahu has publicly praised President Donald Trump’s revocation of the multilateral nuclear deal with Iran, arguing that the deal would “enable Iran to threaten Israel’s survival.”

In June 2018, Ayatollah Ali Khamenei said that Israel is “a malignant tumor that must be removed and eradicated.” Iranian generals have many times expressed a desire to destroy Israel, and add that they are able to wipe out Tel Aviv right now. (It is less likely that Iran would ever bomb Jerusalem, as that would no doubt cause even more problems with Arab countries in the region, who consider Jerusalem a holy site for Muslims as well as for Jews and Christians. Tel Aviv is a city with no reputation for any religious significance).

Whether Iran will ever actually use its military power to attack Israel is not certain. Publicly, they argue that they will not have to do anything to destroy Israel, because it will cease to exist because of its own supposed arrogance.

What does all of this mean to the United States? Perhaps U.S. politicians need to take their cue from the attitude of Israel’s Prime Minister, Netanyahu. He clearly puts his country — Israel — first. That is the position that American presidents and other political leaders should emulate.

Steve Byas is a university history and government instructor. He can be reached at byassteve@yahoo.com