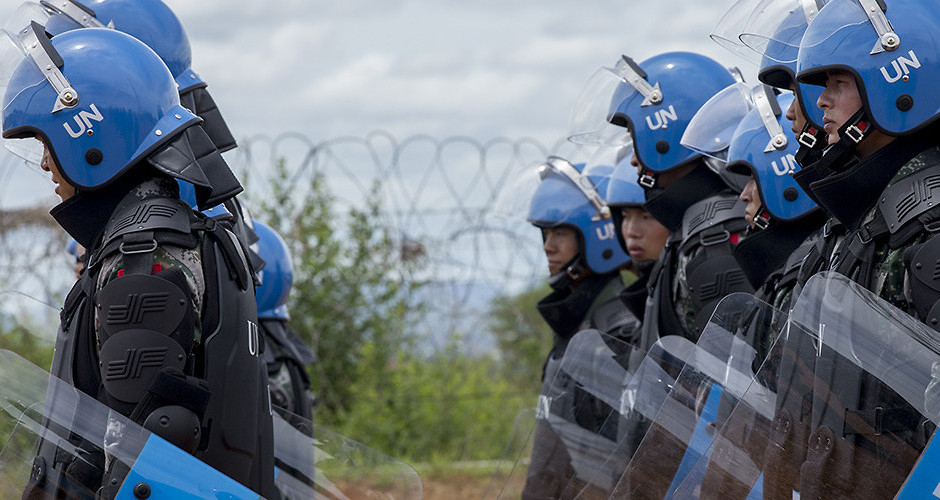 This is a four-part series that examines the UN’s goal of global governance, how the Department of the Interior’s new strategy of landscape-scale mitigation is an ideal vehicle for the injection of the UN’s agenda into US policy, how the proper use of landscape-scale management differs from its politicized use, and how treaties can become powerful and dangerous instruments of socio-economic change in the US.

PART ONE: The UN’s Ideology

How in the world did looking for volunteer opportunities for my wife and I end up leading me to discover for myself how real the threat to the sovereignty of the US is? It all started with a simple ad on volunteermatch.org that read:

If only I had stopped there – my wife and I could be sitting and watching wildlife right now. But I couldn’t help wondering to myself, “Who needs people to do this and why?” So, I went to the home page of the listing’s site, Nature Abounds a small homemade website (recently upgraded to a very professional appearance).

The ad in question was specifically for the Boise, ID area, but Nature Abounds is looking for volunteers in cities and towns nationwide. The data that Nature Abounds collects is funneled to the USA National Phenology Network, a non-profit consortium primarily funded by the US Geological Survey. This data has broad legitimate uses. However, it turns out that this data is also a primary source of information for the United Nations Convention on Biological Diversity (CBD): “Conceived as a practical tool for translating the principles of Agenda 21 into reality.” This data will be used to define areas of interest to the UN like the Columbia River Basin and the Great Lakes Basin across the US, and to establish baselines against which to gage the impact of development on landscape-scale ecosystems. The UN is closely monitoring vast ecosystems across the US.

I went on to read a blog by the co-founder of Nature Abounds about her participation in a Scientific Research Conference held in the UN offices in Geneva. At this conference, small organizations with mandates similar to Nature Abounds from around the world exchanged best practices for recruiting volunteers, training, data vetting, and related subjects. The global coordination, even at this low a level, is amazing.

Looking further, I found that Nature Abounds is a member of the Healing Our Waters-Great Lakes Coalition which is led by the National Wildlife Federation and the National Parks Conservation Association. The National Wildlife Federation does a lot of good work in protecting wildlife and habitat. Unfortunately, as a UN NGO, that work is inextricably intertwined with the UN and its Sustainable Development Goals, discussed momentarily, and they are fully engaged in indoctrinating our children in these goals. Much of their website is devoted to their Eco-Schools USA program. The program is in over 9,000 schools across the nation, and they are currently campaigning to involve 10 million children in the program. What is a private organization doing in our public schools?

From their website I also learned that the National Wildlife Federation is a founding member of the International Union for Conservation of Nature (IUCN) which has a formally accredited permanent observer mission to the United Nations. The IUCN is one of the three most powerful organizations influencing the United Nations Environmental Program (UNEP). According to the article, “Attack of the NGOs” by the American Policy Center, “Virtually all of the international environmental programs and policy changes that have occurred globally in the past three decades are the result of UNEP efforts.” The National Wildlife Federation is inextricably linked to the UN and its agendas.

By the fact of their mutual association, Nature Abounds, Healthy Lakes, and the National Wildlife Federation demonstrate that they all subscribe to, support, and are working towards, the UN’s Sustainable Development Goals as part of a concerted effort. In just four steps I had traced a small website directly to the UN and had discovered that there is a coordinated system in place for monitoring US ecosystems in support of a UN agenda and that its ideology is being taught to US school children.

“We resolve, between now and 2030, to end poverty and hunger everywhere; to combat inequalities within and among countries” [Author: In the context of ending poverty, what else besides wealth redistribution on a global scale can this mean?]

“We resolve also to create conditions for sustainable, inclusive and sustained economic growth, shared prosperity and decent work for all…” [Author: Guaranteed work for the entire world.]

“This is an Agenda of unprecedented scope and significance. It is accepted by all countries and is applicable to all… These are universal goals and targets which involve the entire world, developed and developing countries alike.” [Author: Unprecedented indeed. It is accepted by all countries: even the US government has agreed to the 2030 Agenda for Sustainable Development and is attempting to mandate its implementation through the ratification of treaties.]

In looking closely at the UN’s 2030 Agenda for Sustainable Development, it is easy to see that the claim to achieve the stated goals in just 15 years is ludicrous. Just the goal of improving the living standards of the poor of the world, while praiseworthy, is simply not possible to achieve in 15 years. The forests of the Earth could not be cleared, and its minerals could not be mined fast enough to build the global infrastructure required by these goals by 2030, let alone doing so while simultaneously achieving the environmental goals and creating sustained global economic growth. In a mere fifteen years they claim an expectation of achieving the elusive nirvana pursued by civilizations since the dawn of man. Historically, goals that have been pursued under such flamboyantly lofty claims, while being so blatantly disingenuous, have bestowed upon humankind some of its darkest moments.

The only possible conclusion is that there is no expectation whatsoever to achieve these goals and that this agenda has at its core very different goals on a very different timeline. For example, rather than simply addressing poverty, the goals have been manipulated to address poverty through a specific politicized agenda of global social and economic restructuring of a form that is fundamentally opposed to the ideals of individual freedom, liberty, and private property rights upon which the US was founded.

The goal and purpose of the UN is single minded and is imbedded in all its efforts whether it’s land management, sustainability, climate change, poverty, or human rights: global governance. The UN believes that global governance is the solution to the world’s problems. Former United Nations General Assembly President, Joseph Deiss asserted that the UN has “a central role to play in shaping a global governance structure”, despite the fact that there is nothing in the UN Charter that even mentions the concept of global governance. And it is not just any kind of global governance – it is governance through centralized control.

The US stands as both the single greatest hurdle to the UN’s goal of global governance and its greatest opportunity. The greatest hurdle because the US Constitution by its very design places the rights of individuals first and keeps the power of government in check; the greatest opportunity because as the wealthiest and most powerful nation, should the US be turned to the UN’s ideology, the rest of the world would inevitably follow.

“[The] CDP calls on ECOSOC to establish a strong monitoring and accountability mechanism that covers both developing and developed countries as well as private sector, NGOs and multilateral organizations.”

While the phrase “global governance” is used here to refer to the sum of the governing actions of the world’s governing bodies, it is quite clear that the UN, by placing itself in the position of making “countries as well as private sector, NGOs and multilateral organizations” accountable to it, desires to be the umbrella governing body of the world. Its efforts toward achieving the 2030 Agenda for Sustainable Development are inseparable from its efforts toward global governance.

“The transboundary basins and aquifers link populations of different countries and support the incomes and livelihoods of hundreds of millions of people worldwide… They are vital for economic development, reducing poverty, and contributing to the attainment of the Millennium Development Goals [Emphasis added.].”

The transboundary basins and aquifers are geographical basins and aquifers that straddle international boundaries. Because of this, their management can be controlled and directed by treaties (Besides just basins, the authority to control transboundary ecosystems in general, such as mountain ranges, forests, plains, prairies, deserts, coastlands, aquifers, etc., are also capable of being placed under the control of treaties). The Columbia River Basin, the Great Lakes Basin, the Rio Grande River Basin, and others are examples of transboundary basins in the US, and they each cover vast, economically important, swaths of the country.

Of all the large-scale (landscape-scale) ecosystems, the UN is focused on those that are transboundary because it can more legitimately inject itself in issues that are of an international nature. However, it recognizes that all landscape-scale ecosystems, transboundary or not, are useful in implementing policies that control development and private land use. Because these basins are “vital for economic development,” control of them is control of economic development in the area – for any purpose, not just reducing poverty – and are therefore of keen interest to those seeking to control the countries in which these landscape-scale features appear.

If a country can be made to incorporate the UN policies and ideologies that control economic development into its own policies, then the UN would become the de facto global government: the policies dictated by the UN would trickle down to be executed at the country level even without a hierarchical government structure having been defined. One method of achieving this trickle down of policy is through treaty.

In Part 2, we will examine the policies that are in place in the US Department of the Interior (DOI) that will be utilized to implement the goals of the 2030 Agenda for Sustainable Development.