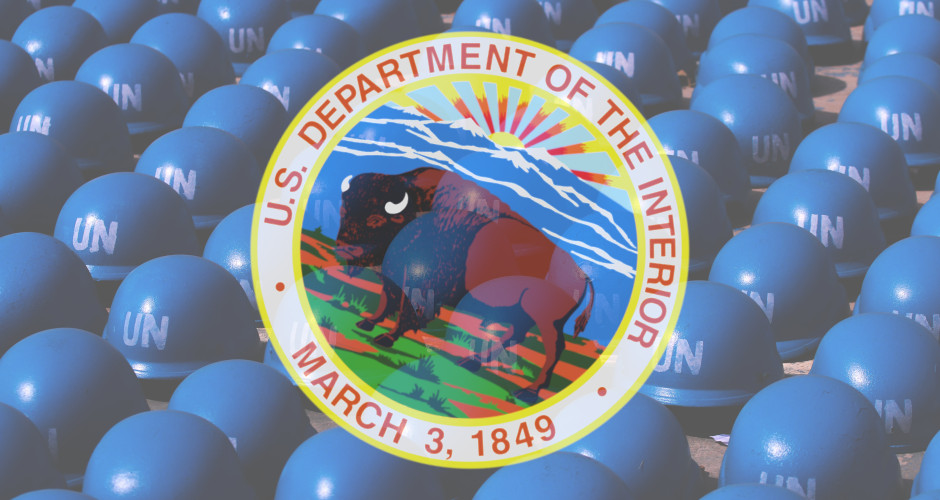 This is the second part of a four-part series. In Part One, we traced the efforts of a small website directly to the UN’s 2030 Agenda for Sustainable Development in just four steps. The players just in this one direct lineage ranged from mom & pop to regional coalition to national non-profit to an international union of “government and civil society organizations.” We also examined the UN’s ideology and goals as they relate to its quest for global governance. Imagine the time, political power, money, and perseverance it took to put this coordinated multilevel system into place, and then realize that the few organizations discussed here are just a drop in the bucket.

In Part Two, we will examine the DOI’s new land management strategy of landscape-scale mitigation and how remarkably well it interfaces with the UN’s 2030 Agenda for Sustainable Development.

The Department of the Interior is implementing a new strategy for managing the lands for which it is responsible: Landscape-Scale Mitigation. This is the merging of the idea of managing ecosystems on a landscape-scale with an updated method of mitigation.

“A Strategy for Improving the Mitigation Policies and Practices of The Department of the Interior – A Report to The Secretary of the Interior From The Energy and Climate Change Task Force April 2014″ explains that:

“The Department’s management bureaus are moving toward a landscape approach to managing resources.”

“In the mitigation context, the landscape approach dictates that it is not sufficient to look narrowly at impacts at the scale of the project; it is necessary to account for impacts to resource values throughout the relevant range of the resource that is being impacted. While “landscape scale” and “regional” are not synonymous, they indicate a similar consideration of interacting systems at a scale larger than the ecosystem and should not be constrained by administrative boundaries.”

The department will be:

Landscape-scale ecosystems is a concept that is widely used but not narrowly defined. It generally refers to large areas typically describing contiguous geographical features such as basins, mountain ranges, forests, plains, prairies, deserts, coastlands, aquifers, etc. Because of their size, landscape-scale ecosystems often transcend geopolitical boundaries, public and private ownerships, and Federal, State, and Local departmental jurisdictions. The management of ecosystems at the landscape scale is a valuable and legitimate means of addressing the many very challenging problems associated with land use, the environment, natural resources, and wildlife, but at the same time it is extremely dangerous to individual liberty because it can also be used as a very powerful political tool.

Landscape-scale ecosystem management has been in the making for decades. Tom Tidwell, Chief of the Forest Service between 2009 and 2017 stated in a 2010 speech that:

“We are working with partners across boundaries and ownerships to address the critical issues facing the nation’s ecosystems on a landscape scale. The groundwork for landscape-scale conservation has already been laid.”

The true intent of landscape-scale is to ultimately bring private land use under the control of the DOI. At a conference supported by the U.S. National Park Service Conservation Study Institute (NPS CSI), the Golden Gate National Parks Conservancy (GGNPC) and the Quebec-Labrador Foundation (QLF) and held at the Presidio of San Francisco in June 2003 by the Lincoln Institute of Land Policy, a private non-profit public land policy think-tank, conference attendee Ted Smith was quoted as saying:

“Ample evidence convinces us that land fragmentation is a threat to most species…. We are seeking to promote reconnections along, [for example], a large stretch of the Rockies at a scale that reflects the needs of keystone species…. Because fragmented land ownership works against nature, we are funding conservation strategies that embrace approaches to integrating the management of public and private lands. Not surprisingly, private lands often hold the greatest biological wealth and represent key corridors for wildlife movement.” [emphasis added]

Mitigation has been around a long time. It was first mandated as a strategy for Federal lands in The Fish and Wildlife Coordination Act of 1934. Since that time, mitigation strategies have evolved into a powerful tool. Today the term “mitigation” refers to a hierarchical approach for dealing with adverse impacts to natural resources, values, or ecosystems in general. The stated goal of mitigation is to first attempt to avoid negative impacts, if this fails or is not possible, then attempt to minimize the impacts, and finally, if there are remaining unaddressed impacts, compensate for those impacts. This last method of mitigation is called compensatory mitigation and uses mitigation banking as one of its primary tools.

Mitigation banking is the concept that any adverse effects incurred by the environment from development must be mitigated by restoring an equal amount of land elsewhere in the same landscape-scale ecosystem back to pristine condition – including the introduction of healthy populations of species impacted by the development. This is envisioned as a “free market” concept where “entrepreneurs” would establish the mitigation bank lands and lease, sell, or rent comparable mitigating land area to developers – a concept similar to carbon credits.

Mitigation banks can be located on public lands in which case they would be located and managed by government agencies. But when talking about mitigation banks as a free market concept, we are talking about the use of private land. Mitigation banks are established on private land in two ways. First, landowners, including farmers and ranchers, can establish mitigation banks on their land. An example of this would be if there were former wetlands on their land that had degraded but were too wet to be usable for farming or ranching. These wetlands could be restored to their original condition under the guidance of one of the government agencies such as the EPA, Forest Service, or Corp of Engineers. Grants to help cover the cost of the restoration are available. Care must be taken when doing this, because once a mitigation bank is established, it must be maintained in perpetuity, and it becomes a permanent requirement attached to the land title in the form of a conservation easement or similar instrument.

In either case, the owners are given credits by the government agencies for the mitigation banks based on the size and quality of the habitat in the bank. These credits can be sold, rented, or leased to developers that need to provide compensatory mitigation for their project. To facilitate the matching of mitigation credit buyers and sellers, businesses acting as credit brokers are appearing such as the Wetland Credit Agency in Wisconsin.

The buying up of private lands or the conservation rights to them for this purpose is occurring at an ever-increasing rate. In fact, there are so many businesses and individuals already in this field that there are industry associations serving it such as the National Mitigation Banking Association (NMBA), National Mitigation & Ecosystem Banking Conference (NMEBC), the National Environmental Banking Association (NEBA), and the Ecological Restoration Business Association (ERBA). The ERBA, for example, identifies themselves as “a US association of Mitigation Bankers, Corporations, NGOs, Non-Profits, Consultants, Attorneys, Engineers, Contractors, Surveyors and other businesses or individuals associated with the ecological restoration industry.”

Making the conversion of private land into mitigation banks a for-profit opportunity was a brilliant move because it effectively allows the DOI to annex private land and take control of its management, development, and potential uses for perpetuity. Depending on how this tool is used and manipulated it may or may not be a problem. An example of how it could be a problem is the fact that the location of mitigation banks could be intentionally chosen to surround and isolate non-mitigation bank private land and thereby restrict the free use of that land by the owners.

In Part Three, we will examine how landscape-scale ecosystem management and mitigation can be used both legitimately and for politicized purposes.