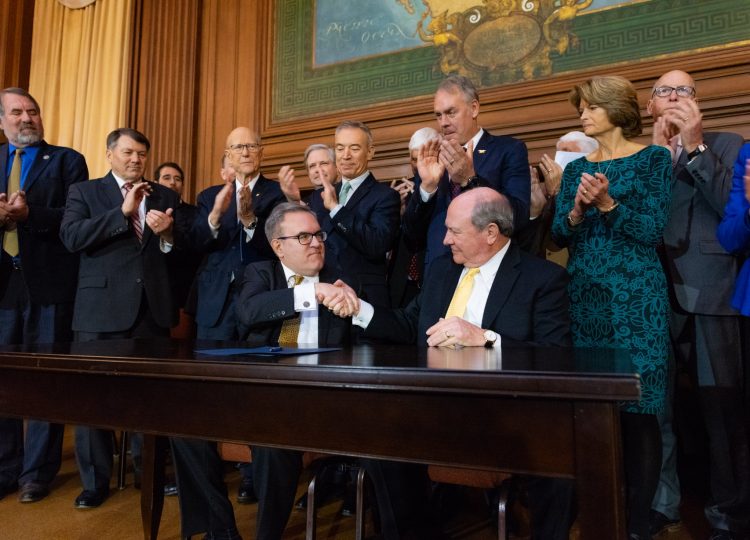 On Thursday, Environmental Protection Agency (EPA) Administrator Andrew Wheeler announced the repeal of a 2015 rule that had broadly expanded the definition of “waters of the United States” in the Clean Water Act. Repealing the rule responds to an executive order issued by President Trump last year and sets the stage for the administration to propose a new definition.

“The Clean Water Act gives the federal government jurisdiction over navigable waters, which are defined as ‘waters of the United States,’” said EPA Administrator Andrew Wheeler.

“Over time this definition has expanded from truly navigable waters and their major tributaries to eventually capture isolated ponds and channels that only flow after it rains, expanding Washington’s control over private property and the states’ traditional authority to regulate their land and water resources.”

The announcement repeals a policy that Wheeler called “an egregious power grab” and expands revisions he announced late last year. Describing a two-step process for repealing and replacing the flawed WOTUS definition, Wheeler explained that today’s announcement both fulfilled a promise the president made last year and sets the stage for “Step 2, a new WOTUS definition that will provide greater regulatory certainty for farmers, landowners, home builders, and developers nationwide.”

At the heart of the rollback is a 2015 decision by the EPA under Pres. Obama which dramatically expanded the definition of the “waters of the United States” which are subject to federal regulation. Under the 2015 rule, legal limits to federal agencies’ authority under the Clean Water Act were not implemented as intended, infringing on state water and land management authority. What followed has been years of litigation, court challenges, and injunctions that created piecemeal enforcement regime that hampered business development.

“Before this final rule, a patchwork of regulations existed across the country as a result of various judicial decisions enjoining the 2015 Rule,” said R.D. James, assistant secretary of the Army for Civil Works.

“This final rule reestablishes national consistency across the country by returning all jurisdictions to the longstanding regulatory framework that existed prior to the 2015 Rule, which is more familiar to the agencies, States, Tribes, local governments, regulated entities, and the public while the agencies engage in a second rulemaking to revise the definition of ‘waters of the United States.’”

The rule had been in effect in 22 states and the District of Columbia, while the other 27 states operated under rules established in the 1980s. Because of its breadth, the 2015 rule caused headaches for a wide range of industries, including farmers and mineral development. Wheeler’s announcement returns the entire U.S. to the earlier regulations while the EPA works to finalize a replacement rule.

“The patchwork approach does no good for the country and it’s not a reasoned way to regulate or address water quality issues,” he said, adding that the goal was for Americans to be able to know if a body of water was subject to federal regulation “without having to hire an outside consultant or attorney.”

The EPA stresses that water quality will not be harmed by the repeal, which will be accompanied by the restoration of prior longstanding Clean Water Act regulations. The agency intends to finish drafting the replacement rule by the end of the year.