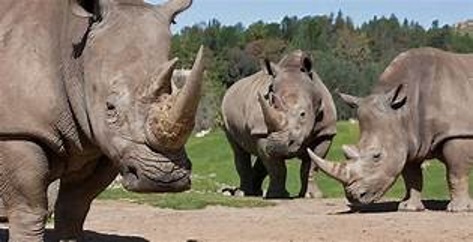 RINO’S are Republicans in Name Only. They wear the red but don’t adhere to the Republican beliefs and vote against those who do.

RINO isn’t spelled the same as Rhino, but they do rhyme.

The moderate “Republicans of Spokane County Club” (RSC) is hosting another round of “The Threats We Face” starring Sheriff Ozzie Knezovich, along with fellow Matt Shea haters Jay Pounder and Tanner Rowe. The RSC will love it but will anyone else besides Chad Sokol of the Spokesman Review attend?

I don’t know how “riveting” it will be, as advertised. It was already done just a few years ago by the Sheriff. I don’t think the “threat” has changed any. The “threat” still seems to be that the RSC, local Press, the local mercantilists, and the Sheriff can’t seem to keep Rep. Shea from getting 58% in the 4th District elections, and then going on to be the most effective legislator for Conservative Christian values in state history. The same coalition has been effective before though. 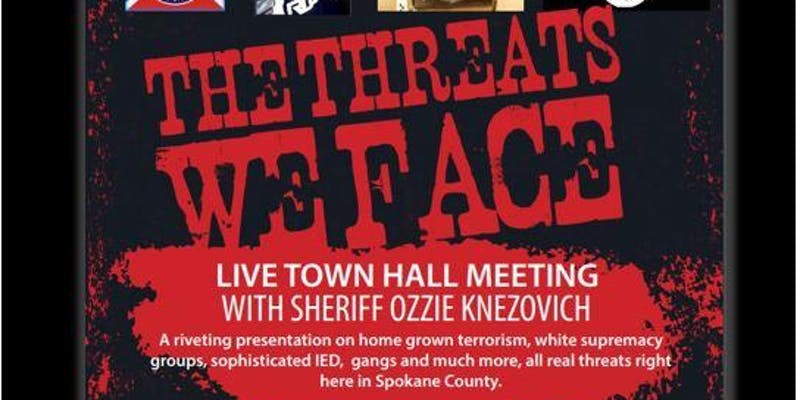 Why would other Republicans, who are supposedly Conservative also, do this to their own? Because they are moderates. They supported Deep State candidates Senator John McCain and Governor Mitt Romney for President in 2008 and 2012, both of whom went on to lose to Barak Obama anyway. Those two Republican chameleons went on to be thorns in the side of President Trump’s effort to Make America Great Again.

Although not specifically advertised in their marquee, the RSC will be hosting a primarily Matt Shea bashing event with two apostate members of Matt’s security detail, Jay Pounder and Tanner Rowe. I had seen Jay Pounder around for a couple years but I had never seen Tanner Rowe before he and Jay Pounder tried to disrupt the 51st State Public Informational Event a few months ago. If Jay Pounder had qualms about Matt Shea and was one of his advisors you would think he would have shared his concerns with his friend Matt instead of with the Sheriff and Spokesman Review first. Pounder seems to be getting professional advice on how to systematically leak his confidences to the Spokesman Review, which reacts in horror to each serialized revelation in this big Nothing Burger.

I have been friends with Matt for ten years and we have disagreed on some things but we have discussed those things cordially and agreed to disagree like friends do. I didn’t rush off to the newspaper for 5 minutes of fame.

The whole things stems from an outline of a Bible Study on Old Testament Warfare in contrast to Just War Theory derived from the New Testament. Bible Studies usually focus on hard issues and Christians strive to find consistency between different dispensations. In addition to being God’s Word the Bible is a history book too and the Bible is a bloody book with lots of sex and violence.

My sources who actually worked on Matt’s security detail tell me that Tanner Rowe filled in once at the request of Jay Pounder and was stationed outside. That was the extent of his activity with Matt.

Tanner Rowe is now a guest opinion columnist for the Spokesman Review:  Tanner Rowe: Here’s why Rep. Shea gets re-elected by district voters

But who is the RSC? In 2008 the Ron Paul supporters swept the Spokane County Convention by using a slate. The local GOP Establishment already had their seats picked out for the State Convention but lost to a bunch of newbies. They have never forgiven us. We were supposed to support their slate of John McCain delegates and keep quiet. Never mind that every delegate from King County was a McCain delegate because they used the same slate strategy. McCain was the anointed one and Ron Paul wasn’t. The Establishment Republicans then formed the Republicans of Spokane County and tried to pass themselves as the official Spokane County GOP. It sort of worked but it was fraudulent because they refused to put the word “Club” behind their name. They enjoy being mistaken for the real deal and that works for them.

In 2014 Chair of RSC Beva Miles asked me to speak to RSC at one of their meetings. I said I would be glad to but only if they put the word “Club” on their name. Beva said they wouldn’t do that, and I said that I wouldn’t speak to them until they did. They still haven’t done so even though the Spokane County Party asked them to. This causes some confusion since the Spokesman Review has attributed their statements to the official GOP and once the GOP got billed by the Coeur d’ Alene Resort for their annual boating on Coeur d’Alene Lake.

Matt Shea, Mike Fagan, and I supported Ron Paul for President in 2008 and 2012. That seemed to be our original sin. We would not “seig heil” to McCain or Romney.

In 2012 I ran for Commissioner against Shelly O’Quinn who worked for Greater Spokane Inc. (GSI).  As soon as Shelly announced all 3 County Commissioners and the Sheriff endorsed her. It was a done deal. RSC also endorsed her but on her literature put “endorsed by Republicans of Spokane County.” They should have added the word “Club” to that but they wanted voters to believe that the Official Republican Party had endorsed her, which they didn’t. That was fraudulent.  I spoke to several Republicans later who said they had voted for Shelly because they thought the Republican Party had endorsed her. 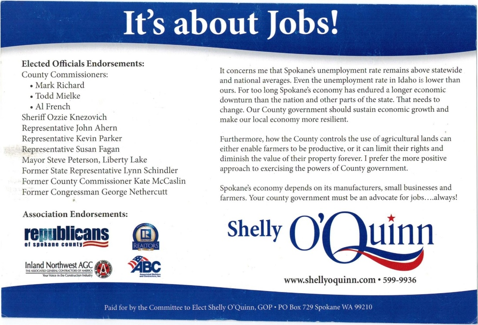 GSI does not stand for Goldman Saks Incorporated, but just as Goldman Saks is a revolving door for the President’s Cabinet, Greater Spokane Inc seems to be one for the Spokane Board of County Commissioners. Todd Mielke left the BOCC to take the helm at GSI. The $200,000 plus the County pays GSI should cover his salary.

But what do the RINO’s stand for then? In my opinion they stand for mediocrity. They are loosely tied to the Mainstream Republicans of Washington State who also stand for nothing: washingtonmainstream.org.

They remind me of the church of Laodicea in Revelation. “I know your works, that you are neither cold nor hot. I could wish you were cold or hot. So then, because you are lukewarm, and neither cold nor hot, I will vomit you out of my mouth.”  Yes, lukewarm they are and consider Christian Conservatives in the vein of the Founders as extremists. Like Goldilocks, the Mainstream Press finds this porridge just right. The Spokesman Review (SR) doesn’t want a new state even though we are suffering from a lack of Representation in Olympia and Washington DC. Things are just fine for the SR the way they are.

Owner of the Spokesman Review Stacey Cowles pulls the strings with muckraker reporter Chad Sokol attacking Matt Shea and the Liberty State with innuendo and lies from confirmed and unconfirmed sources. The idea is to try and kill two birds with one stone even though Matt Shea has broken no laws and the formation of the Liberty State is a Constitutional Process.

Matt Shea is motivated to protect his country from enemies foreign and domestic based on his tours of Iraq and Bosnia, but Chad Sokol wouldn’t know about that, never having been in combat before. He has never disinterred bodies of men, women, and children with their hands tied behind their backs because of excessive government.

Matt Shea is a Christian and not a racist, but Chad wouldn’t know enough about Christianity to know that it is impossible for a Bible based Christian to be a racist. My sources tell me Chad Sokol has never read the Bible or the Constitution, and yet this cub reporter is assigned the role of Grand Inquisitor of Matt Shea and the State of Liberty. But the RINO’s are OK with that.