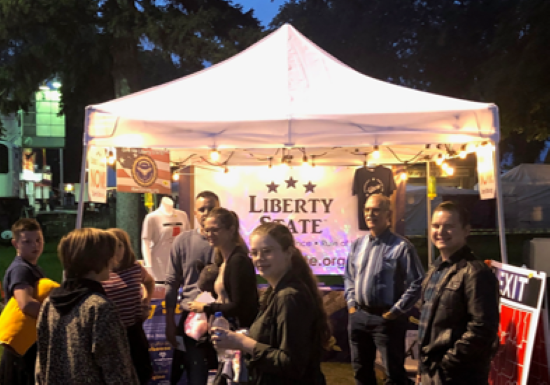 The Spokane County Fair Booth for the 51st State of Liberty has been a success so far as of Day 7 of the 10 day Event. It does go to show that any press is good press, even the extremely negative press from our local rags. I have worked the booth every evening since the fair opened 8 days ago and at least 90% of the people stopping by have been very positive. Several have said the only reason they came to the Fair was to stop by our booth after reading about it in the Spokesman Review, and sign our petition to the County Commissioners to have an advisory vote on the subject. Then we can really know how popular the idea is.

It was difficult getting a booth since we had to organize so hurriedly the last few weeks, and the attempt by naysayers to petition the Board of County Commissioners of Spokane County to prevent us from having a booth.   See: 51st state supporters reserve booth at Spokane County Interstate Fair, draw scrutiny

Jessa Lewis, who organized the online petition to stop us was almost elected as a 6th District Representative last year, and yet she wants to prevent the free speech of many of her would be constituents by circulating an online petition to the BOCC to shut down our Booth. To paraphrase Orwell ‘all of us are equal – but some more equal than others’ resonates with this Evergreen College graduate. She wants her free speech but not allow others to have theirs. I would counter back to Jessa “I cannot have my liberties unless I am willing to extend them to others.” I doubt that maxim would be popular at Evergreen State College.

Perhaps the most frequent question we get is ‘How can we financially survive without the West side to support us.” Although I don’t know the source of this diagram it is used most often to illustrate that the West side of the State contributes more taxes to Olympia than the East side does. It does make sense that there would be a lot more economic activity to tax in the more densely populated counties than the rural counties, but what does that actually translate into $’s per resident? 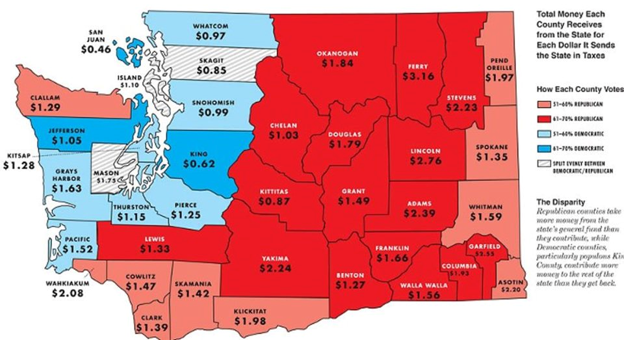 I will say that if we had our own Eastern WA State we would be more likely to spend our tax revenues wiser and thriftier. I also believe a lower tax, lower regulation state would cause many small to medium size businesses to flock to Liberty State to be able to produce products to make lives better without getting crushed by the government. The West side has Boeing and Microsoft, but it really doesn’t matter where they do business. They can afford to hire the high power tax attorneys to find loopholes, or fund lobbyists to create them.

Be that as it may, we stack up almost evenly with the nearby State of Idaho in terms of population and State operating expenses, and I think Idaho does Okay, and much better in some categories. But money isn’t everything. It is hard to put a price on greater freedom to live ones life, yet people all over the world have paid for freedom with their lives.

L-Exit is just another phenomenon of the current world-wide freedom movement. From Brexit in Great Britain, to Hong Kong in the Orient. Unfortunately, we do have to be worried about another Tiananmen Square massacre taking place in Hong Kong because the people have no guns, just the government has guns. At least, the much pilloried Rep. Matt Shea believes in defensive war, unlike Communism and Islam who massacre Christians if they get too uppity and want to worship in peace. Where is the Spokesman Review Opinion Board on that? What joy has Communism or Islam ever brought to anybody?

So why does the Spokesman Review and most of the local academia want to stop us? Because they are happy with things the way they are. They love it when Olympia over taxes and over regulated the rest of us. They are part of the Club that George Carlin alluded to (Warning!  bad language, but lots of truth George Carlin – The big club.  They have plenty of money already so what they crave is control over others. If we had sufficient incomes they couldn’t control us. That couldn’t control Donald Trump because he is a billionaire and they hate him for breaking ranks and actually trying to “Make America Great Again.” Trump’s money gave him that freedom and they can’t control him. Trump played by the book and used the laws they wrote to his advantage. Every stone these glass house denizens have thrown at him has fallen short.

They hate Matt Shea too. They can’t control him because he fears God and not them. He believes his treasure is in Heaven and is willing to wait for it. He doesn’t seek power, he seeks righteousness, so he is getting Trumped too.