No meltdown: ANOTHER ship with climate-change warriors gets stuck in ice 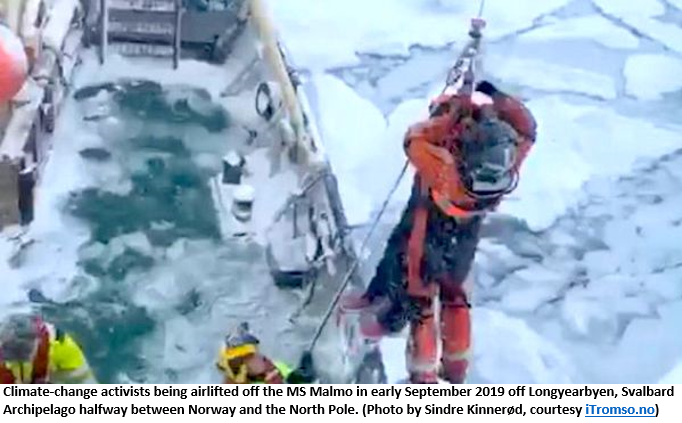 No meltdown: ANOTHER ship with climate-change warriors gets stuck in ice

Those who promote the belief in so-called “man-made climate change” may have a meltdown of their own upon learning this.

A ship carrying 16 “climate-change warriors” looking to document purported melting ice conditions got trapped in ice last week in the Hinlopen Strait, halfway between Norway and the North Pole.

The Sweden-flagged MS Malmo became stuck Sept. 3 off Longyearbyen, Svalbard Archipelago, according to the Maritime Bulletin.

The author of the story, Erofey Schkvarkin, noted: “Something is very wrong with Arctic ice, instead of melting as ordered by UN/IPCC, it captured the ship with Climate Change Warriors.”

This is the second time this year that unexpectedly thick ice has caused a problem for a vessel.

In July, “The Norwegian research vessel and icebreaker Kronprins Haakon (Crown Prince Haakon) was forced to turn back north of Svalbard after meeting considerably thicker ice than expected,” reported Electroverse.net. 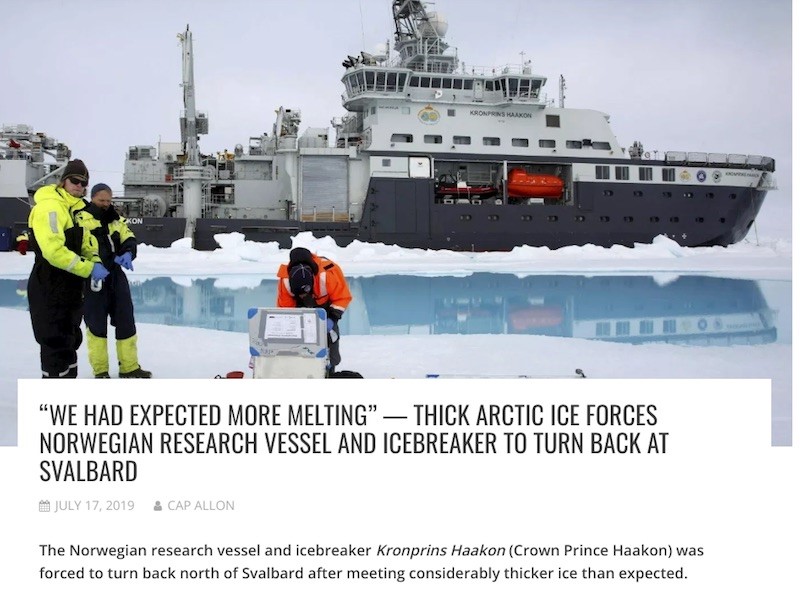 Thick one-year ice combined with large batches of multi-year ice have merged to form powerful helmets, and several of these are impenetrable to us, said Captain Johnny Peder Hansen.

The ice is still 3m (10ft) thick, in mid-July! Even the researchers’ long special-purpose chainsaws proved hopeless, while the 20,000 horsepower Kronprins Haakon, at a cost of USD $175 million, failed miserably at attempts to push through.

“In the middle of July, we saw a few signs of thawing and [assumed] that spring had come, said Captain Hansen, who for several decades has worked on various vessels in the Arctic. “We had expected more melting.”

Klassekampen, a respected left-leaning Norwegian newspaper writes: “Polar bears were seen on Bjørnøya this past winter –located in the middle of the Barents Sea– which shows that the ice edge was very far south.”

The latest trapping from last week got the attention of Thomas Lifson at AmericanThinker, who noted, “The conviction that global warming is melting ice in the Polar Regions has once again led climate warriors into danger and the need for rescue.”

Lifson pointed to yet another similar climate-change ice trapping from 2014 in the Antarctic. 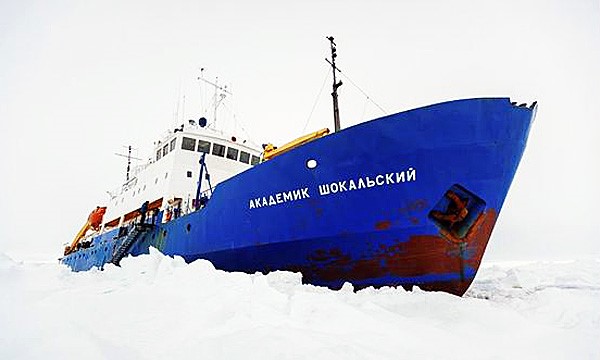 He wrote at the time:

Warmist dupes and true believers in the media are having a very hard time with the hilarious spectacle of a ship of literal fools who were so deluded by the warmist cult as to believe it was safe to venture into the Antarctic waters in a vessel that was not an icebreaker. The “scientific expedition” was intended to document the comparative paucity of ice in the area first explored by Douglas Mawson a century ago. As nearly everyone connected to the media on the planet now knows, the Spirit of Mawson voyage, as the organizers dubbed their chartered Russian ship the MV Akademik Shokalskiy, became stuck in ice and needed rescue. Adding to the comedy, the Chinese icebreaker that rescued them is now itself stuck in the ice that was supposed to be melting.